The Peerless Prognosticator is ON THE AIR!!! -- Game 6: Capitals at Senators: October 25

The Washington Capitals take to the road for the second time this season when they visit the capital of Canada to face the Ottawa Senators at Canadian Tire Center in a 7:00 pm start on Monday.  The Caps enter play having earned points in all five games played to date, their 3-0-2 record matching last year’s record after five games.  The Senators go into the contest with a 2-3-0 record, which is an improvement over their 1-3-1 record through five games to start last season.

Ottawa has been playing games close and low scoring.  In no game so far have Ottawa and their opponent combined for more than five goals.  The offensive side of the Senators’ ledger has been light on crooked marks, their 2.00 goals per game ranking tied for 27th in scoring offense.  Only ten goals have been scored by the Senators in the five games, and center Chris Tierney has three of them.  Tierney was a second-round draft pick (55th overall) of the San Jose Sharks in 2012 and played four seasons with the Sharks. In September 2018 he was part of a blockbuster trade that saw him traded with a conditional first round draft pick in 2019, a second round draft pick in 2019 , a first round draft pick in 2022 , Rudolfs Balcers, Dylan DeMelo, Joshua Norris and a conditional second round draft pick in 2021 to the Senators for Erik Karlsson and Francis Perron.  In four seasons since with the Senators, including this season, he is 29-78-107, minus-42.  That goal scoring would appear to be unsustainable, given that he has those three goals on a total of five shots on goal, and only once in three seasons with Ottawa coming into this season did he score double digits in goals (11 in 71 games in 2019-2020). Tierney is 2-3-5, minus-7, in 13 career games against the Caps.

Another of the 2012 draft cohort leads the Senators in points entering this game.  Right wing Connor Brown was taken in the sixth round (156th overall) in that 2012 draft by the Toronto Maple Leafs.  Brown played four seasons with the Leafs, posting 43 goals and 99 points in 253 games.  He was traded to Ottawa in July 2019 with Michael Carcone and Nikita Zaitsev a third round draft pick in 2020, Aaron Luchuk, Cody Ceci and Ben Harpu.  Brown has shown a goal-scorer’s touch with the Sens, posting 37 goals in 127 games in two seasons preceding this one.  He does not yet have a goal this season, but he does have four assists in five games.  Brown is 2-5-7, plus-4, in 11 career games against Washington.

Five games, three goalies.  The Senators seem to have a problem settling on a goalie, but the task might sort itself out with Matt Murray having gone on the shelf with a head/neck injury suffered against the New York Rangers on Saturday.  It comes at a bad time for Ottawa, given Murray’s 0-1-0, 1.36, .936 record in two appearances.  With Murray out, the goaltending duties fall to Filip Gustavsson (1-0-0, 2.00, .941) and Anton Forsberg (1-2-0, 3.45, .913).  Forsberg has the advantage of experience with 59 games with four teams compared to Gustavsson’s ten games over two seasons with the Senators.  Forsberg has not been able to grab a number one job for himself in any of his four stops in the NHL (Columbus, Carolina, and Chicago before Ottawa).  Only once in seven NHL seasons did he appeared in more than ten games, that being in 2017-2018, when he went 10-16-4, 2.97, .908, in 35 games with Chicago.  He is 2-1-0, 3.02, .889 in three career appearances against the Capitals. 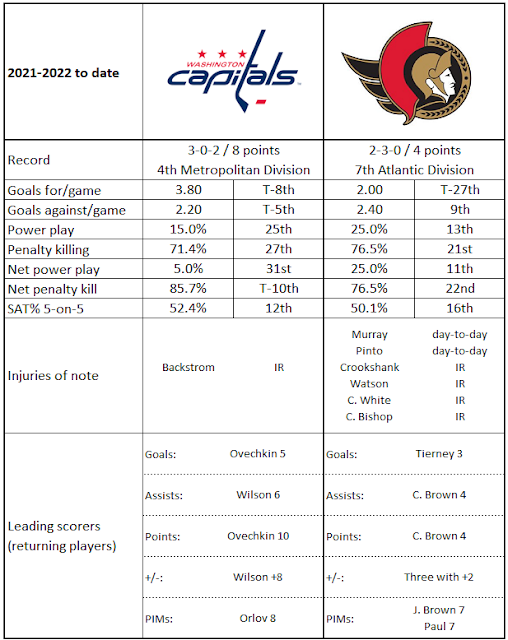 1.  Ottawa has played to four one-goal decisions in five games so far, posting a record of 2-2-0 in those games.

2.  So far, three seems to be the magic number in games for the Senators.  In four of the five games, the winning team scored three goals.

4.  The Senators are pretty loose with the puck.  Their 14.40 giveaways per 60 minutes are most in the league.

1.  The Caps have allowed only one second period goal this season, fewest in the league.

2.  Washington has allowed three goals at 5-on-5, fewest in the league.

3.  Only Edmonton has more wins when leading after one period (four) than the Caps (three, tied with three other teams).

4.  The Caps have scored first in four of five games and have a 3-0-1 record in those games.

5.  Washington is tied for the league lead in wins by three or more goals (three, with three other teams).

It took a while, but the Senators finally got their man.  Brady Tkachuk and the Senators couldn’t seem to agree on a contract extension after the player’s three-year/$10.75 million contract expired at the end of last season.  But after a protracted period of back and forth that at times seemed to be hung up on contract structure, the parties agreed to a seven-year/$57.5 million deal on October 14th.  One does wonder, though, about the term and size of the deal, considering that Tkachuk, while still only 22 years old, seems stuck as a mid-40’s point player (he was 22-23-45 in 71 games as a rookie in 2018-2019, 21-23-44 in 71 games the following year, and 17-19-36 in 56 games last season).  What he seems more known for, or at least more accomplished in at this stage of his career are the arts of antagonism.  He logged 250 penalty minutes in 198 games over his first three seasons and a whopping 725 credited hits in that span, second in the league to Ryan Reaves (762).

Tkachuk provides an interesting counterpoint to Tom Wilson, another physical player of note who has broadened his game over the past several years.  Tkachuk’s draft pedigree (fourth overall in the 2018 Entry Draft) suggests he has more upside than Wilson as an offensive player (he is averaging 25 goals per 82 games in his career to date), but that part of his game seems to be lagging in terms of its expression.  Tkachuk is 0-2-2, minus-3, in five career games against Washington.

Every player finds himself in a slump at some point, and T.J. Oshie seems to be in one now.  Oshie was 1-1-2, plus-1, in the Caps season opening win over the New York Rangers, but he is 0-0-0, minus-3, in four games since.  Part of it might be his getting used to third line minutes on the right side after spending much of his time as right wing on the first or second lines in recent years.  Oshie has a mini-slump last season after opening the year with a goal and two assists against Buffalo in the season opener, going 0-0-0, minus-1, in the two games that followed.  Oshie quickly righted himself, going 1-3-4, plus-1, in the five games that followed, so a quick end to his current slump would not be a surprise.  As has been his style over his years with the Caps, he contributes in other areas when the offense is sparse.  He has six credited hits in five games, three blocked shots (fifth among forwards), and two takeaways.  The slump should not be of particular concern given how Oshie has started seasons in the past.  His October/November/December splits are almost identical (33-43-76 in 114 October games, 32-45-77 in 113 November games, and 31-33-64 in 111 December games in his career).  He is 9-7-16, plus-14, in 21 career games against Ottawa.

Ottawa has given the appearance of a grind-it-out team in the early going, and this could present problems for the Caps, who have been a team playing at a faster pace than was the case last season.  Being disciplined in all three zones, avoiding taking unnecessary chances, and limiting the Senators’ ability to counterpunch will be things to watch in this game.