The Peerless Prognosticator is ON THE AIR!!! -- Game 7: Red Wings at Capitals: October 27

Fresh off their first visit to Canada in almost two years, where they defeated the Ottawa Senators in a wild 7-5 shootout, the Washington Capitals return home on Wednesday night to host the Detroit Red Wings at Capital One Arena.  The Red Wings will come to Washington a rested team, having been off the ice since beating the Chicago Blackhawks, 6-3, last Sunday.

The Red Wings will also come to D.C. as one of the surprise teams in the NHL in the early going of the new season.  Through six games of their schedule, the Wings are 3-2-1, an improvement over their 2-4-0 six-game record from last season (they would go 2-8-2 in their first dozen games).  The Wings have done it with improved offense, their 3.33 goals per game ranking 12th in the league in scoring offense, more than a goal per game better than the 30th ranked scoring offense with which they finished last season (2.23 goals per game).

Much of that is due to the start Tyler Bertuzzi has had.  He leads the team in goals (six), points (nine), game-winning goals (two), and plus-minus rating (plus-8)but all is not unicorns and accordions for Bertuzzi and the Wings.  Bertuzzi has declined taking the COVID vaccine, and in doing so he limits his availability for games (he cannot participate in games in Canada, which limits access for individuals not fully vaccinated).  As recently as the weekend, the team would not disclose if Bertuzzi had been suspended.  He did participate in the Wings’ win over Chicago on Sunday, posting a goal and two assists in the 6-3 win.   It is an unfortunate turn of events for the Wings and Bertuzzi, who is off to a good start after missing 47 games last season to a back injury.  The Wings hope he can return to the level of production he displayed in the two seasons preceding his injury-plagued season last year, when he posted 42 goals and 95 points in 144 games.  Bertuzzi is 0-1-1, minus-5, in six career games against the Caps.

When Bertuzzi was missing from the lineup for the Wings’ contest in Montreal last weekend, Robby Fabbri slid into his spot.  Fabbri has received praise from head coach Jeff Blashill who said of him, “Fabbs, for me, has been outstanding from day one of training camp in terms of his competitiveness, he has a high compete level, he's got skill and has some of the attributes that Bert brings to the table in terms of going to get pucks and ability to score."  But still, in spite of the praise, Fabbri is off to a bit of an uneven start.  He is 1-2-3, minus-3, in six games to date (his plus-minus rating is tied for worst on the team).  He has been on ice for two even strength goals for (second-fewest among skaters to dress for six games), and his on-ice even strength goal differential of minus-3 is tied for worst on the team.  Fabbri is another player who had health/injury issues last season, missing eight games to COVID and 17 games to an upper body injury to close the season.  He was in the midst of a good season, a 10-8-18, plus-3, scoring line when his season ended to injury.  Fabbri is 1-0-1, minus-11, in seven career games against Washington.

When the Red Wings traded a third round pick and the rights to goalie Jonathan Bernier to the Carolina Hurricanes for goaltender Alex Nedeljkovic, the Red Wings might have thought the Hurricanes’ salary cap problem (Nedeljkovic was an arbitration-eligible restricted free agent) became their goalie of the future.  That might end up being true, but for the moment he is off to an iffy start with his new team.  In four games to date, Nedeljkovic is 1-1-1, 3.40, .897.  He did, however, earn the win against Chicago on Sunday, stopping 32 of 35 shots.  Nedeljkovic was the third goalie taken (second round/37th overall, two spots ahead of the Caps’ Vitek Vanecek) and is in his fifth NHL season.  After three seasons in which he dressed for a total of six games, posting a 2-2-1, 2.55, .901 record, he emerged as a potential number one goalie with Carolina last season, going 15-5-3, 1.90, .932 in 23 games.  His goals against average and save percentage led all NHL goalies appearing in more than ten games.  Nedeljkovic has never faced the Caps. 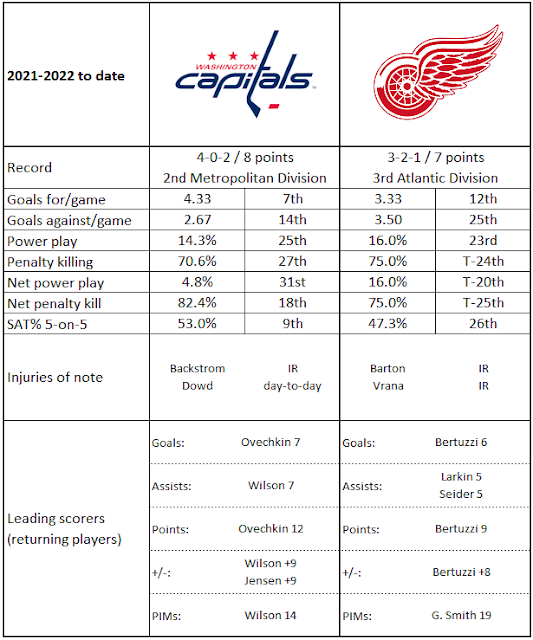 4.  No team in the league has taken more penalties than Detroit (35), and they are second in penalty minutes (89), trailing only the Seattle Kraken (114).

5.  The Red Wings are tied with the Florida Panthers in power play opportunities per game (4.17).

2.  The Caps are the only team in the league to allow two overtime goals.

5.  Washington is tied for second in net penalties drawn (plus-5, with Pittsburgh).  Only Vancouver is better (plus-8).

Caps fans have spent a lot of years rooting against the New York Rangers.  One of the foundations of that squad over the years was Marc Staal, who played for 13 years in New York and faced the Caps on 42 occasions in the regular season and 27 times in the postseason.  Well now, Caps fans will likely get their first glimpse of Staal in a red jersey instead of blue.  Staal was traded by the Rangers in September 2020 with a 2021 second round draft pick in 2021 for the always mysterious “future considerations.”  With the league playing an abbreviated intra-divisional schedule last season, the Caps did not get a chance to renew their rivalry with Staal.  Playing in all 56 games least season, Staal finished with what was, in some respects, a rather typical “Marc Staal” year – 3-7-10, minus-5, and averaging 18:25 in ice time a night (which was on the low end of his career ice time averages).

This season, Staal has had his ice time pared back even more in the early going, averaging only 16:05 a night, second-lowest among the seven defensemen to dress for the Wings so far.  Nevertheless, his on-ice goal differential at even strength of plus-4 is best among defensemen on the team, and his on-ice goals against (three) is fewest among defensemen dressing for all six games.  Stall has never been an especially prolific offensive contributor – three 20-point seasons, none since 2014-2015 – so his two assists in six games seems little cause for alarm.  His most important role might be as a mentor to the defense, where three of its members (Moritz Seider, Gustav Lindstrom, and Filip Hronek) are all 23 or younger.  Staal is 1-10-11, even, in 42 career games against the Capitals.

It would surprise no one that Alex Ovechkin (19 goals, 31 points) and Nicklas Backstrom (23 points) are the leaders among active Capitals in career scoring against the Red Wings, but sitting in third place on that list is John Carlson, who also has the best plus-minus rating against Detroit of any active Capital (plus-8).  Two of his four career goals against Detroit are game-winners.  Carlson has been especially productive at home against the Red Wings, posting four of his five multi-point games against Detroit at home and posting a plus rating in nine of the ten games he faced the Red Wings in Washington.

Carlson is not off to an explosive start at the offensive end, perhaps a bit odd for a player who has averaged at least 2.0 points per 60 minutes in each of the four seasons preceding this one.  He is 1-2-3 in six games so far, averaging 1.3 points per 60 minutes.  Part of the matter might be a product of shooting the puck.  Through six games, Carlson is averaging 1.33 shots on goal per game, his lowest shooting output since his rookie season in 2009-2010 (0.95).  He did record a season-high three shots on goal, one which found the back of the net for his first goal this season, so the early season dry spell might be just a hiccup for one of the most consistent offensive defensemen over the last half-decade. Carlson is 4-17-21, plus-8, in 22 career games against Detroit.

The Caps should have beaten the Ottawa Senators – a rebuilding team – on Monday night.  It should not have been as difficult as it became, especially after taking a 4-1 lead into the first intermission.  Even veteran teams are prone to the occasional “take a weak team lightly” problem, and that appeared to be the case for the Caps, especially in the middle period.  The key in this game is not to repeat the mistake.  Detroit is a young team that is moving from one looking for a direction to a hungry one looking to take the next step forward in their rebuild.  They will use this game as a measuring stick.  The Caps need to whack them with it, early and often.