Week 2 was kind to the Washington Capitals.  Not perfect, but a 2-0-1 record is something on which the Capitals can build going forward.  The Caps finished the week in a three-way tie for second place in standings points, the Caps, Carolina, and Pittsburgh all with eight points, one point behind the New York Rangers. 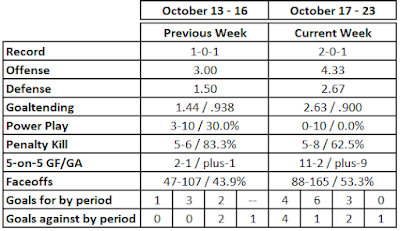 The Caps’ 2-0-1 record for the week and the five standings points earned was tied with three other teams for seventh-best in the league and tied for second-best in the division with the New York Islanders, one point behind the New York Rangers, who were 3-0-0 for the week.  The week left the Caps with a 3-0-2 record, matching their five-game start from last season.  They finished the week with a 2-0-2 record at home for the season to date, tied with Columbus and New Jersey for most points earned on home ice (six).  Fehervary, Nick Jensen, Nic Dowd, and Anthony Mantha each shot to a 33.3 percent mark to lead the team, although Mantha was the only one with more than three shots on goal (six).

The Caps’ offense was working quite well in Week 2.  Eight different Capitals posted goals, Evgeny Kuznetosv leading the team with four in the three games, while defenseman Martin Fehervary recorded his first NHL goal in the 4-3 loss to the Calgary Flames to close the week.  Thirteen Caps recorded points, Kuznetsov leading the way with six. Tom Wilson and Alex Ovechkin right behind him with five apiece.  Kuznetsov had a particularly active week, posting 15 shots on goal in the three games, six more than Ovechkin, Conor Sheary, and Connor McMichael.  All 18 Caps skaters dressing for the week had at least one.  Kuznetsov and Dmitry Orlov had the game-winning goals for the week.  As it was, the Caps finished the week seventh in scoring average (4.33 goals per game).

Washington has become a very stingy team when it comes to allowing shots on goal, and Week 2 was no exception.  The Caps finished with the third-fewest shots on goal allowed for the week (26.7) and lead the league for the season with 25.6 shots on goal allowed per game.  Of the 2 teams to play three games this week, the Caps allowed the fifth-fewest number of shot attempts at 5-on-5 (118) and had the third-best shot attempts-for percentage at 5-on-5 (55.0 percent).  Eight of the 18 skaters for the Caps in Week 2 did not see a goal against scored at even strength.  None were on ice for more than two (Ovechkin, Kuznetsov, and Dmitry Orlov).

This was an uneven week for the Caps netminders.  Vitek Vanecek opened his week with a 25-save effort in a 4-1 win over New Jersey in the middle game of the week.  Vanecek continued a streak in that game of not allowing a goal in either the first or second periods of the three games he played to that point to start the season.  That streak came crashing down when he allowed three goals on 13 shots in the first period of the Caps’ 4-3 overtime loss to Calgary on Saturday.  It was not so much a case of Vanecek playing poorly as much as the skaters in front of him seeming to be struggling to wake up for a matinee game.

For Ilya Samsonov, it was a case of being good enough in stopping 24 of 27 shots, allowing a goal in each period, in the Caps’ 6-3 win over Colorado to open the week.  He was much better in his relief stint in the Caps’ loss to the Flames, stopping all 12 shots he faced in the last 40 minutes of regulation, giving the Caps a chance to climb back into the contest with a three-goal second period that tied the game.  Samsonov allowed a goal in overtime to the Flames, but it did little to detract from his performance in that contest, being a critical element in the Caps securing a standings point that they might need down the road.

If not for the abysmal power play, more attention might be paid to the Capitals’ penalty kill, which struggled in Week 2, allowing three goals in eight shorthanded situations.  And it was not as if the Caps faced powerful power plays.  Colorado (1-for-4 against the Caps) finished Week 2 with a 30th-ranked 10.0 percent power play.  New Jersey (1-for-1) finished the week ranked tied for 14th (22.2 percent).  Calgary (1-for-3) finished the week tied for 21st (16.7 percent).  Fortunately, two of the power play goals allowed mattered little in the outcome, Colorado scoring their power play goal late in the third period of their game, making the score 5-3 (the Caps scored an empty net goal less than a minute later).  New Jersey scored their power play goal – their only tally of the game – midway through the third period in a 4-0 game.  Only against Calgary, who opened the scoring with a power play goal midway through the first period, scored a power play goal that influenced the final outcome. 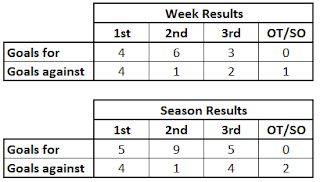 The Caps have been, at times, dominant in pace, possession, and production so far.  They have had solid, if at times a bit uneven goaltending.  Their defense looks solid and stable in their pairs deployment.  In general, they seem to be much further ahead at this early juncture than they were at a similar point last season.  The game to close the week against Calgary could have been a stinker, and it was for 20 minutes, but the Caps showed a resiliency and resolve that allowed them to crawl back into the contest and squeeze a standings point out of the contest.  The team moves into what looks like an easier portion of the schedule in Week 3, and their performance to date, especially in Week 2, would suggest that they can take advantage of the three opponents they will face in the week ahead.