The Peerless Prognosticator is ON THE AIR!!! -- Game 15: Penguins at Capitals: November 14

The rivalry is renewed.  Caps versus Penguins.  For the 237th time, these teams will face off against one another in the regular season, the Caps with a 102-104-14 (16 ties) record against the foul fowl.  For the Caps it is a brief home respite interrupting a stretch of six road games.  Pittsburgh comes to Capital One Arena to play the back half of a road back-to-back set of games opening with a matchup in Ottawa against the Senators on Saturday night.  The Caps could be seeing Sidney Crosby, Brian Dumoulin, and head coach Mike Sullivan after they were cleared from COVID protocol.

Getting Crosby back could be the shot in the arm the Penguins need.  After scoring 23 goals in their first five games, going 3-0-2, they scored only 13 goals in their last six games, going 2-2-2.  Kasperi Kapanen is the goals leader in the recent drought with three.  Kapanen, a 22nd overall draft pick of the Penguins in 2014, took a roundabout path to his current position with the Pens.  He was traded to the Toronto Maple Leafs in July 2015 with a 2016 first round draft pick, a third round draft pick in 2016, Scott Harrington and Nick Spaling for a second round draft pick in 2016, Tyler Biggs, Tim Erixon and Phil Kessel.  He played for parts of five seasons with the Leafs, posting 41 goals and 90 points in 202 games.  After the 2019-2020 season, he was traded back to Pittsburgh with Pontus Aberg and Jesper Lindgren for a first round draft pick in 2020 , Filip Hallander, Evan Rodrigues and David Warsofsky. One scouting report on Kapanen sates, “owns a very good sniper's release, so goal-scoring is his strong suit. Skates very well and knows how to free himself from coverage to get open. Can even play the point on the power play, due to his great shot,” but he has only 14 goals in 52 games over two seasons with the Pens, a 22-goal pace over 82 games.  It is a decent goal scoring pace for a secondary scorer, but for someone with a “very good sniper’s release,” his production to date with Pittsburgh seems underwhelming. Kapanen is 5-5-10, plus-3, in 15 career games against Washington.

Three other Penguins are multiple goal scorers in their six-game slide. Jake Guentzel and Jeff Carter are not surprises on this short list, but Brock McGinn is an unexpected entry.  McGinn spent his first six NHL seasons with the Carolina Hurricanes, posting 51 goals in 345 games, a 12-goal pace over 82 games.  Last July, McGinn signed as a free agent with Pittsburgh, a four-year/$11 million deal.  He has a 3-3-6, plus-1, scoring line in 12 games and is the sort of secondary scorer whose secondary scoring matters.  Pittsburgh is 3-1-1 in the five games in which he has points, 2-3-2 in the games in which he was held off the points sheet.  His scoring has been almost rhythmic this season – points in his first four games, none in his next three, then points in two straight, and he goes into Saturday’s game without a point in his last three contests. McGinn is 1-0-1, minus-9, in 17 career games against the Caps.

The Penguins have really been decimated on defense, the team dressing nine defensemen in their recent six-game slump.  Only two – Mike Matheson and John Marino – dressed for all six games.  Marino is an interesting player.  He was a sixth-round (154th overall) pick by the Edmonton Oilers in the 2015 Entry Draft, one of four defensemen the Oilers took in that draft (three of them have appeared in NHL games – Marino, Ethan Bear, and Caleb Jones -- none are still with the Oilers).  He then spent three years skating for Harvard University and bypassing any games in the AHL to take a spot on the Penguins roster in 2019-2020.  Now in his third season with the Pens, he is 10-35-45, plus-19, in 120 career games.  He is second overall among Penguin defensemen in points (six), trailing only Kris Letang (seven), tied with Letang among defensemen in shots on goal (19), second to Letang in credited hits (19 to Letang’s 31), and he is averaging 23:42 in ice time per game, second to Letang (27:38).  Marino is 0-4-4, plus-1, in ten career games against the Capitals. 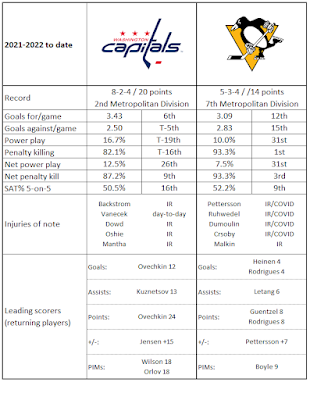 1.  Going into their game against Ottawa on Saturday night, the Penguins have played in four consecutive extra time games, three of them going to the Gimmick.  The Pens split the four games, going 2-2, beating Philadelphia in overtime and Florida in the Gimmick, while dropping decisions to Minnesota and Chicago in the freestyle competition.

2.  Through Friday’s games, the Penguins had yet to win consecutive games this season.

3.  Each of Pittsburgh’s three wins in regulation were by margins of three goals of more.

5.  Only the New York Islanders have fewer penalty minutes (79) than Pittsburgh (80); their 2.91 penalties taken per 60 minutes are fewest in the league.

2.  In the Ovechkin/Crosby era, both teams have scored 209 goals.

Conor Sheary is one of the hardest working players you will ever want to see.  Despite his slight build, by hockey standards – 5’9”/178 pounds – he is unafraid to work his way into difficult spaces on the ice to fish out a puck or make a play.  Those qualities, however, do not necessarily make him a good fit for the power play.  Sheary has averaged 2:31 per game in power play time this season, sixth on the team among forwards, and with Anthony Mantha out for the time being (Mantha ranks fifth with 2:34 per game), Sheary might be getting more work with the man advantage.  Consider that he logged no power play time in any of his first four games this season.  However, over his last eight games he logged at least four minutes four times, and only once did he record less than two minutes, that coming in the Caps’ most recent game, against Columbus, and he still skated all of the 1:35 in power play ice time the Caps had.  He does have a power play goal (one of six Caps with at least one) and two power play points (one of six forwards with at least one), but he seems a bit of an odd fit on the power play, essentially getting the minutes (35:09 in total power play minutes) that Nicklas Backstrom would have been getting.  Sheary, the former Penguin, is 6-2-8, plus-8, against his old team.

Buckle up and strap on those helmets, it’s Capitals/Penguins.  Never a boring game, always with subplots (in this contest, the dueling injury lists and “The Return of The Sid”).  The Caps are 1-1-2 in their last four home games against Pittsburgh.  The lone win in those games for the Caps featured six third period goal, four of them by the Caps in a 5-2-win.  Things might not play out quite that way, but the Caps will take advantage of the only home cooking they will get until Thanksgiving Eve.