The Peerless Prognosticator is ON THE AIR!!! -- Game 11: Flyers at Capitals: November 6

Having completed their first ten games with a 5-1-4 record, the Washington Capitals embark on their next ten games when the Philadelphia Flyers come to town on Saturday.  The Caps enter the contest carrying their first losing “streak” of the season (0-1-1).  The Flyers arrive in DC as something of a surprise club with a 5-2-2 record, although they are 1-1-1 in their last three contests.

The players who are supposed to score are doing just that for the Flyers.  Claude Giroux and Sean Couturier are tied for the team lead with 11 points apiece.  They also top the power play scoring for the club with three and four points, respectively.  They also are matched in points recorded in wins (eight apiece), both are shooting at least 25 percent, Couturier with four goals on 14 shots (28.6 percent) and Giroux with three on 12 shots (25.0 percent).  The pair also lead all forwards in ice time, Couturier with 19:36 per game and Giroux with 16:59.

The pair is tied for the team lead in first goals with two apiece, and they have the only empty net goals for the Flyers this season (Couturier with a pair and Giroux with one) and empty net points (Couturier with three, Giroux with two).  None of this should be surprising, given that Girous and Couturier rank one-two among active Flyers in career points (Giroux with 869, Couturier with 454), goals (Giroux with 276, Couturier with 178), and game winning goals (Giroux with 46, Couturier with 29). Giroux has been held without a point in only one of nine games so far (in a 4-0 loss to Calgary on October 30th), while Couturier has been held without a point in three of nine games, but he also has five two-point games.  Giroux is 23-25-48, plus-5, in 53 career games against the Caps, while Couturier is 12-19-31, plus-13, in 41 career games against Washington.  Unsurprisingly, the pair lead all active Flyers in career goals and points against the Caps.

For the Flyers to have a successful season, it is almost a certainty that “they gotta have Hart.”  Goaltending has been an issue for the Flyers for decades (arguably, since Ron Hextall hung up his skates), and they thought they found the solution to that problem with Carter Hart.  He was solid in his first two seasons, going 40-26-4, 2.59, .915, with one shutout in 74 games.  Last season, though, was a disaster – 9-11-5, 3.67, .877, with one shutout.  He won consecutive decisions only twice, and those instances came in his first seven games.

This year, Hart seems to be on his way to fulfilling his promise as a number one goalie.  Of 41 goalies with at least 200 minutes played, he ranks 15th in goals against average (2.41) and 13th in save percentage (.926), which might not seem overly impressive, but the improvement year-to-year has been impressive.  What has been remarkable is his even strength save percentage (.948), which ranks tied for third in that group of 41 goalies.  What Hart has not done yet this season, though, is win consecutive decisions, having alternated wins and losses over the seven games he has played thus far.  If he gets the call, the Caps will be looking to hang a second consecutive loss on Hart for the first time this season after he dropped a 3-2 overtime decision against Pittsburgh on Thursday.  Hart is 2-3-1, 2.89, .907 in six career games against Washington. 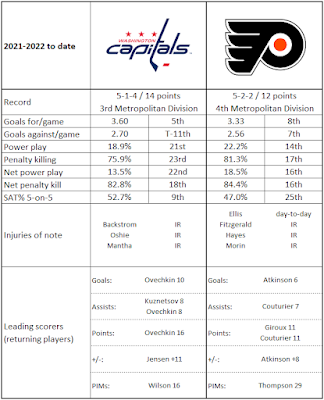 1.  The Flyers are second in the league in faceoff winning percentage (55.5 percent), trailing only Toronto (55.9 percent).

2.  Philadelphia has not dressed a rookie for game action yet this season.

3.  Only Carolina has allowed fewer third period goals (two) than the Flyers (five).

4.  Philadelphia is tied with New Jersey for second fewest 5-on-5 goals allowed (13) among Metropolitan Division teams; only the New York Rangers have allowed fewer (12).

1.  If Washington turns the tide in overtime and wins, it will be their tenth overtime win over the Flyers in the all-time series.  Philadelphia would be the fourth team against which the Caps have at least ten wins (New York Rangers: 13; New York Islanders: 13; Boston Bruins: 10).

2.  The Caps are one of seven teams having allowed fewer than ten goals overall in each regulation period this season.

3.  The Caps are the only team in the league not charged with a major penalty so far this season.

4.  Washington has trailed after two periods only twice this season, but they lost both games (0-1-1).

Voracek has not yet scored a goal for the Blue Jackets (he does have nine assists) and has a plus-1 rating, while Atkinson leads the Flyers in goals (six) and is a team-leading plus-8.  But things have not gone well for Atkinson lately.  After going 6-1-7, plus-9, in his first five games, he is without a point in his last four contests with a minus-1 rating.  His shot volumes are down, from 18 in his first five games (3.6 per game) to eight in his last four (2.0 per game).  And, after scoring a pair of goals in his first road game of the year, he is without a point in his last three road contests.  The drop in production comes despite his getting about a minute more per game in his last four contests (16:31) than his first five (15:42).  Atkinson is 12-7-19, plus-4, in 27 career games against Washington.

When Anthony Mantha went down to a shoulder injury and had immediate surgery, it left the Caps without what amounted to its second line of forwards, Mantha’s name added to those of Nicklas Backstrom and T.J. Oshie on IR.  Although that means some youngsters are getting a chance at meaningful minutes – Connor McMichael, Hendrix Lapierre, Brett Leason among them – vets are going to have to strike a balance between raising their game and playing within their limits.  Lars Eller is one of those vets. He has been the usual versatile center, playing up and down the lines from his accustomed perch on the third line.

But he has struggled to make things happen in the offensive end.  He is without a goal after ten games, although he does have four assists, despite 19 shots on goal.  He has been an equal opportunity scorer, going 0-2-2 both at home and on the road, and he is 0-2-2 in both wins and losses so far.  His production is of some concern, given that he is averaging a career high 17:46 in ice time.  He and Tom Wilson are the only forwards with more than 1:30 per game on both sides of special teams, and he is fourth in even strength ice time among forwards. He has shouldered a significant burden of time, but has little to show for it offensively so far.  Even a slight improvement in this area could spell the difference between the Caps dropping games in overtime and winning them in regulation.  Eller is 6-13-18, minus-12, in 44 career games against the Flyers.

The Caps lost two games in Florida against very good teams.  Fortunately, those losses were out of division.  The Caps return to Metro Division play against the Flyers, only their third intra-division game to date.  They will be looking to improve on a 2-0-0 record against a team that has played only one intra-division game, an overtime loss to Pittsburgh in their last contest.  These teams could very well be fighting for a last playoff spot in the spring, which makes this game, even at this early juncture, important for the Caps to win, in regulation preferably.