The Peerless Prognosticator is ON THE AIR!!! -- Game 30: Capitals at Jets: December 17th

The Washington Capitals wrap up their three-game road trip with a visit to Canada Life Center to face the Winnipeg Jets on Friday evening.  The Caps are coming off an almost comeback against the Chicago Blackhawks, who did their damage with three goals in 34 seconds in the second period and then held off the Caps with a 5-4 overtime win.  Nevertheless, the Caps are 12-3-3 in their last 18 games and trail the New York Rangers by a tiebreaker for the lead in the Metropolitan Division.  Winnipeg comes into this game having lost two in a row, a Gimmick loss to the Vancouver Canucks and a regulation loss to the Buffalo Sabres.  The Jets are 4-7-2 in their last 13 games.

The usual suspects in Jets scoring are at the top of the heap in that 13-game span for the Jets, all with 12 points apiece.  Blake Wheeler has his 12 points in only 12 of those games.  Now in his 14th season, his first two-plus seasons with the Boston Bruins and the rest in Winnipeg, Wheeler is at or near the top in most offensive statistical categories.  For example, he is the all-time leader in assists (480), points (714), and even strength points (486),  With 230 goals, he is second only to Ilya Kovalchuk (328) in franchise history, second in even strength goals (176), second in power play points (209), second in game-winning goals (33), second in shorthanded goals (11), and second in Gimmick goals (19).  While he was on a decent ru putting up points, this has not been the easiest of seasons for Wheeler.  He has only one goal in 22 games, that coming in his most recent game, a 4-3 Gimmick loss to Vancouver on December 10th.  The down side of that was that he suffered a knee injury that, while he is listed as “day-to-day,” could keep him out for “multiple weeks.”  He would be missed by the Jets against Washington, he carrying a career 5-14-19, plus-5, scoring line against the Caps.

Kyle Connor is the goal scoring member of this trio, and that is hardly a surprise.  Although he has not been a Jet long enough (six seasons) to be among the highest-ranking producers in Jets history, he already has three 30-plus goal seasons and almost surely would have had a fourth consecutive season last year but for the abbreviated schedule.  As it was, he still had 26 goals in 56 games.  He is well on his way to another 30-plus goal season this year with 18 goals in 28 games to date.  This is not to say he isn’t climbing up those offensive statistics lists in Jets history.  He ranks fifth in all-time goals scored (149) and is tenth in points (283).  His 39 power play goals is tied for seventh in team history, while his four overtime goals is tied for sixth, his 27 game-winning goals ranked fifth, and six Gimmick goals ranked ninth.  Connor is a leading indicator of Jets success this season when he records a goal.  They are 9-1-4 in the 14 games in which he scored at least one to date.  Connor is 3-3-6, even, in eight career games against the Capitals. 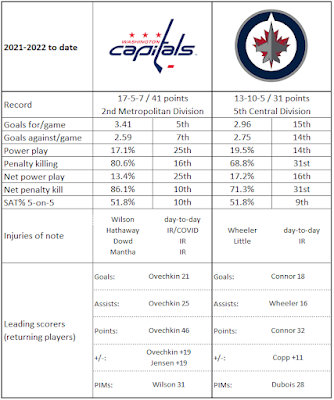 1.  Speaking of Connor, he has been held without a shot on goal only once this season.  Winnipeg won anyway, 4-3 in a Gimmick win against Dallas on November 2nd, and yes, he did pot a goal in the freestyle competition.

4.  The Jets are very consistent in the goals they allow by period at home – 12 in each of the first and second periods, 13 in the third period.

5.  The Jets have trailed at the first intermission on home ice only three times in 14 games, but they lost all of them (0-2-1).

1.  Since the Caps shut out San Jose back on November 20th, they have allowed three or more goals eight times in 11 games.

2.  Since posting a five-game points streak on the road in mid-November, the Caps are 2-3-0 in their last five road games, and one of the wins came via the Gimmick (3-2 over Buffalo last Saturday).

3.  The Caps have the third-worst power play on the road this season (10.8 percent). They do, however, have three power play goals in their last six road contests.

5.  Nevertheless, the Caps are still 8-3-3 on the road this season, tied for seventh in wins and tied for fifth (with “that team”) in road points percentage (.679).

You remember Brenden Dillon, right?  Sturdy stay-at-home defenseman, plays with an edge, not going to provide much offense?  Played 66 games for the Caps (2-17-19, plus-13) before he was traded to the Jets for a second-round draft pick in 2022 and second-round draft pick in 2023?  Sure you do.  Well, he’s pretty much that same player for Winnipeg – 0-5-5, a defense-leading plus-9, 24 penalty minutes (most among Jets’ defensemen), 78 credited hits (most among defensemen), 14 giveaways (fewest among defensemen playing at least 15 games), eight takeaways (tops among defensemen), plus-9 goal differential at even strength (best among defensemen).  Dillon is never going to be much of an offensive contributor; his career high in goals is six in 2013-2014 with Dallas, while he hit 22 points in consecutive seasons with San Jose in 2017-2018 and 2018-2019.  He will challenge neither career high this season, absent divine intervention, but he seems to be just the very “Dillonesque” player Winnipeg traded for.  He is 1-2-3, minus-1, in 13 career games against the Caps.

Nicky’s back.  And, he returned in a very Backstrom-like way when he faced the Chicago Blackhawks after missing the first 28 games of the season in rehab for a hip injury.  An assist in his eighth shift of the game, feeding T.J. Oshie, who found Alex Ovechkin for the game’s first goal. It was the 270th instance in his career that Backstrom assisted Ovechkin on a goal.  With Evgeny Kuznetsov currently in COVID protocol, Backstrom’s return comes not a moment too soon.  Washington has not fielded a complete and healthy center lineup in any game this season, and while they have not suffered much in terms of wins and losses to date, they can’t afford more attrition at the position.  On the other hand, the nature of Backstrom’s injury and length of absence (his last game action was last May in the playoffs) would seem to require his being eased back into the lineup.  He did skate more than 18 minutes in his first game back, 14:40 of which was skated at even strength (14:20) or shorthanded (0:20), which presumably would provide more wear and tear than time on the power play, where he is generally the quarterback from the right wing wall.  As much as his production, the ice time he gets – particularly in its mix – will be something to watch as Backstrom gets back in game shape.  Backstrom is 18-30-48, plus-6, in 48 career games against Winnipeg.

Winnipeg has had a disappointing year overall, but they do have a 9-5-1 record on home ice so far this season with a 1.00 positive goal differential per game.  And while their penalty killing on home ice has been ghastly, they have a seventh-ranked power play (25.0 percent) at home.  And therein lies the danger for the Caps, who have allowed five goals in three of their last five road games after posting consecutive road shutouts on the west coast last month.  Shoring up that defense is the priority here.  Do that, and the Caps offense might be able to take advantage of a Jets team that allowed four goals in three of their last four home games.