The Peerless Prognosticator is ON THE AIR!!! -- Game 31: Kings at Capitals: December 19th

The Washington Capitals return to Capital One Arena on Sunday evening to host the Los Angeles Kings…maybe.  Games are being postponed, players are entering COVID protocols at accelerated rates, and the league is trying to catch up.  That puts the schedule in a period of uncertainty for the time being.  And, from a purely self-interested hockey point of view, the timing is both good and bad for the Caps.  Postponement, or even a pause, could give the Caps a chance to get healthy, or at least healthier.  In their 5-2 win over Winnipeg on they were missing Tom Wilson, Evgeny Kuznetsov, Nicklas Backstrom, Nic Dowd, Garnet Hathaway, Trevor van Riemsdyk, and Anthony Mantha.  Nevertheless, the Caps go into Sunday’s game with a 13-3-3 record over their last 19 games, the best record in the league (by standings points earned) since November 8th, when they started that run.

The Kings will wrap up a four-game road trip playing the back end of a back-to-back set that starts Saturday night in Carolina.  The Kings’ play has been uneven of late, going 5-5-4 going into Saturday’s contest after a promising 8-5-1 start to the season.  Over those 14 games, the Kings have displayed a respectable defense, averaging 2.64 goals allowed per game, 13th in the league over that span.  But the offense had sputtered, averaging 2.57 goals per game, 23rd in the league over the same stretch.

If there is a surprise among the skaters in those 14 games, it is Brendan Lemieux leading the team in goals per game (four in nine games/0.44 per game).  The five games he missed in this stretch were due to his being suspended for five games for biting Ottawa’s Brady Tkachuk.  Lemieux is having a decent, potentially career year overall.  His five goals in 17 games already surpassed the four goals in 49 games he posted last season, split between the New York Rangers and the Kings.  He is on a pace to finish the season with 21 goals, which would far eclipse the 12 in 63 games he recorded in 2018-2019 in a season split between Winnipeg and the Rangers.

There is, though, his odd early career experience.  Drafted by Buffalo in 2014 (second round/31st overall), he was traded in February 2015 with a 2015 first-round draft pick, Joel Armia, Tyler Myers and Drew Stafford to the Winnipeg Jets for Zach Bogosian, Evander Kane and Jason Kasdorf.  He played parts of two seasons with the Jets before moving on, traded with a 2019 first-round draft pick and a 2022 fourth-round draft pick to the New York Rangers for Kevin Hayes.  He played parts of three seasons in New York before he was traded once more, to the Kings for a 2021 fourth-round draft pick.  What has also followed him around is a suspension history, suspended in November 2018 for two games after a hit on Florida’s Vincent Trocheck, again in July 2020 for two games after a hit on Colorado’s Joonas Donskoi, and finally his five-gamer for biting this season.  Lemieux is 0-2-2, minus-2, in nine career games against the Capitals.

Adrian Kempe leads the Kings in goals over their recent 5-5-4 run with six and is right behind Lemieux in goals per game (0.43).  This could be a breakout year for the six-year veteran.  Coming into this season, Kempe established himself as a consistent support scorer, recording double digits in goals for four consecutive seasons and at least 28 points over those four years.  This season, he has 11 goals in 28 games, a 32-goal pace.  And, he is not doing it with unsustainable shooting efficiency.  His 13.9 shooting percentage does represent a career best to date, but this is his fourth year in the last five in which he posted shooting percentage over ten percent.  His 16 points overall put him on a pace to finish with 47 points, which would also be a career best by a wide margin (he had 37 points in 2017-2018, his first full season with the Kings).  Los Angeles has gone well when Kempe lights the lamp, going 6-2-1 in the nine games in which he has goals, and they are 9-2-2 when he posted at least one point.  He comes into this game in a bit of a slump, though, with one point (a goal) in his last five games.  Kempe is 1-2-3, minus-3, in eight career games against Washington. 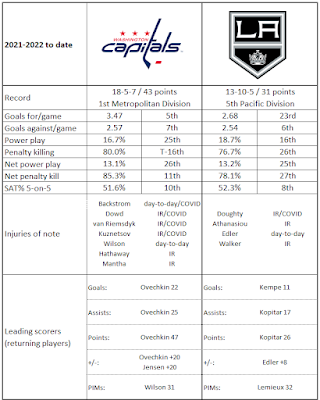 2.  Los Angeles has a hard time killing penalties on the road, their 72.2 PK ranking 30th in the league.

3.  On the other side of special teams, the Kings are one of five teams to allow a league-high three shorthanded goals on the road and have done so in only 12 road games going into Saturday’s schedule.

5.  The Kings play well within the rules in road games, their 82 penalty minutes being second-fewest in the league (Pittsburgh: 78).

1.  Not only do the Kings take few penalty minutes on the road, but the Caps take few on home ice, their 81 minutes in home games being fewest in the league.

2.  Only Toronto and Colorado have more wins on home ice when out-shooting the opposition (nine times apiece) than the Caps (eight).  The Caps are the only team in the league not to have lost in regulation when out-shooting opponents at home (8-0-2).

3.  The Caps are one of five teams at the top of the heap in wins when scoring first at home (eight wins).  However, they rank 28th in winning percentage at home (1-2-2/.200) when allowing the first goal, tied for 26th in the league.

With Drew Doughty in COVID protocol and Alexander Edler on the shelf with an injury, it falls to Matt Roy to anchor the Kings’ defense.  Roy, a seventh-round pick in the 2015 Entry Draft (194th overall), is in his fourth season with the club.  He played 25 games in his first season with the Kings and followed that up with what was his “rookie” season in which he went 4-14-18, plus-16, and finished 13th in Calder Trophy voting for top rookie.  He has not displayed a dominant offensive game yet, but he has gone bone dry in goal scoring this season with none in 28 games (he is 0-9-9, plus-5, overall).  He is getting more responsibility though, especially with the absences of Doughty and Edler.  He is averaging 21:42 per game in ice time, second to Doughty among Kings defenders.  Oddly enough, for a player with modest offensive numbers, he leads the defense in shots on goal by a wide margin with 72, compared to Edler’s 39 shots on goal.  No player in the league has more shots on goal without having recorded a goal so far this season going into Saturday’s schedule. Roy does have points in three of his last four games, the Kings going 3-0-1 in those contests.  Roy is 0-1-1, minus-3, in four career games against the Capitals.

With Nicklas Backstrom and Evgeny Kuznetsov both in COVID protocol, Lars Eller has inherited the top line center position for the time being.  Eller’s talent as perhaps the most versatile center on the roster, a player who can play on any line, will be put to the test.  Eller is having a rather better than usual season overall (5-9-14, plus-11, in 24 games, a 16-29-45, plus-35 pace) in what is a rebound from his 8-15-23, minus-1, season in 44 games last year.  He has overcome a sluggish start (0-4-4, plus-2, in his first dozen games) to go 5-5-20, plus-9, in his last dozen games.  There has to be a bit of concern about his ice time, though.  In nine games in which he skated more than 18 minutes, the Caps are just 3-2-4 (11-2-2 when skating under 18 minutes), although he is 3-3-6, plus-3 in those games.  The circumstances are different, though.  His ice time will likely be inflated for the moment as a result of a combination of assuming first line responsibilities and penalty killing responsibilities (his 1:39 in shorthanded ice time per game ranks third among Caps forwards).  What Caps fans would like to see is for Eller to improve his numbers on home ice.  He is 4-5-9, plus-13, in 11 road games, but he is just 1-4-5, minus-2 in 13 games at Capital One Arena.  He is 3-2-5, minus-1, in 15 career games against the Kings.

Los Angeles has been, and remains, one of those teams it is frustrating to play against.  They are not a flash-and-dash team, more of a zone-to-zone team that mucks things up on defense and grinds away on offense.  They can scored (four of more goals in five of their last nine games heading into Saturday), but they can struggle, too (four games with two or fewer goals in that same stretch).  For Washington, coming off perhaps  their most satisfying effort of the season in the 5-2 win in Winnipeg, their 60 minute effort in that game will be something they need to repeat on Sunday against a team that makes opponents work hard for what they get.