The Peerless Prognosticator is ON THE AIR!!! -- Game 25: Blue Jackets at Capitals: December 4th

The Washington Capitals have lost consecutive games for the first time in a month – a three-game losing streak in Games 9-11 in the first week of November – and will seek to end the streak at two when the Columbus Blue Jackets come to town on Saturday.

Despite the min-losing streak, the Caps are three standings points clear of second place Carolina in the Metropolitan Division after Thursday’s games.  Columbus comes to town carrying a three-game losing streak of their own, all on the road.  Their visit to DC will be the last on their current four-game road trip.

The Jackets have had issues on the road this season with a 4-6-0 record, worst in the Metropolitan Division.  And the problem is keeping pucks out of the net.  They have the worst scoring defense in the league on the road (4.10 goals allowed per game).  In seven of the ten road contests, the Blue Jackets allowed four or more goals, allowing six goals in two of their last three road games.

The problem, fair or not, starts with goaltending, and neither of Columbus’ chief netminders have distinguished themselves on the road.  Joonas Korpisalo might have a winning road record (3-2-0, one no-decision), but his 3.75 goals against and .894 save percentage are evidence of vulnerability on the road.  That goals against average ranks 48th of 59 goalies with at least 150 minutes logged on the road, and his save percentage ranks 44th.  It is a bit unusual for Korpisalo, whose home and road records have been similar over his seven-year career, all with Columbus (38-28-11/2.82/.904/3 shutouts at home, 34-32-10/3.09/.903 on the road).  And he has been the better of the two goalies on the road. Korpisalo, who is listed as day-to-day with an illness, is 3-1-1, 1.74, .945, with one shutout in his career against the Caps.

Elvis Merzlikins has struggled on the road, going 1-3-0, 4.32, .873 in four road appearances.  He has not allowed fewer than three goals in any of his four road games and was yanked in his last road start after allowing three goals on six shots in less than 13 minutes of work in a 6-0 loss to Nashville on November 30th.  It is hardly unusual for Merzlikins to struggle on the road; he has been a homer in his three years with Columbus, going 21-7-5, 2.03. .937 with seven shutouts in 36 career home games, but going 9-18-8, 3.06, .904, with one shutout in 38 road appearances.  Merzlikins has never faced the Caps.

Columbus’ road offense, while not nearly as weak on the road as their defense (2.70 goals per game/tied for 19th in road scoring offense), neither is it a strength.  Boone Jenner has done his part, though, with a 7-2-9 scoring line in ten road games with a 24.1 percent shooting percentage.  He is having a better year on the road than at home so far (4-2-6/13.9 percent in 11 home games).  Jenner has stumbled in road scoring of late, though.  After posting four goals in his first five road games this season, he has two in his last five road contests, still respectable, but still a dropoff.  That scoring matters.  Columbus was 3-2-0 in those first five road games when Jenner was more productive, 1-4-0 in their last five road games (including both games when Jenner recorded goals) when Jenner experienced that slight drop off.  Jenner is 1-7-8, minus-8, in 27 career games against Washington.

Columbus has relied on veterans this season, dressing only two rookie skaters so far.  Cole Sillinger, who came to the Blue Jackets as a 2021 draft pick from the Seth Jones trade with Chicago, is having a fine start to his NHL career.  In 21 games to date (he is one of only three skaters from the 2021 draft to appear in an NHL game so far this season), he is 4-5-9, minus-6.  Those four goals are tied for ninth in this year’s rookie class, and his nine points are tied for tenth.  He has not been shy about shooting the puck, either, his 48 shots on goal ranking fourth among rookies.  On the other hand, like many rookies, even those with fine starts, he has hit a skid.  Sillinger is 0-3-3, minus-9 in his last 11 games overall after a 4-2-6, plus-3 ten-game start, and he is without a point in his last six road games with a minus-7 rating.  Columbus needs to see a turn around in his production; they are 6-1-0 in the seven games overall in which he has points, 6-8-0 when Sillinger fails to record a point.  He is without a point and is minus-2 in one career appearance against Washington. 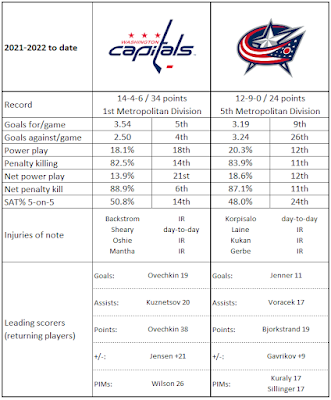 1.  Columbus has four road wins so far this season, but only one in regulation time – a 7-4 win over Buffalo on November 22nd.  The other three wins were in three consecutive road games in late-October/early-November, two of them settled in the Gimmick.

2.  The Blue Jackets have allowed 35.7 shots per game on the road, most among Metropolitan Division teams and fifth-most in the league.

3.  Columbus has scored first in only two of ten road games and lost both.  They are the only team in the league without a standings point when scoring first on the road.

4.  The Blue Jackets have the third worst goals percentage on the road (goals for as a share of total combined goals, for and against) in the league at 35.4 percent.

5.  Columbus has struggled in the second periods of road games, scoring only seven goals in ten games while allowing 16 (minus-9).

1.  Despite the Gimmick loss to Chicago on Thursday night, the Caps still have the best home record in the Metropolitan Division (7-1-4).

3.  Washington’s plus-24 goal differential is best in the Metropolitan Division.

4.  With 85 goals scored to date, the Caps are 19 goals clear of Carolina for most in the Metro Division.

5.  Nine Capitals have hit posts 17 times in 24 games this season.  None have hit a crossbar… yet.

With Seth Jones shipped off to the Chicago Blackhawks, Zach Werenski is now the go-to blueliner for the Blue Jackets.  He has filled the role in the offensive end of the ice so far, leading the defense with five goals and second in points (10).  He has three of the four power play goals scored by the Columbus defense (tied for second-most among all NHL defensemen) and has six power play points to lead the team.  He has been a minutes-eater, averaging 26:16 in ice time this season, third-most in the league.

It took Tom Wilson a little time to get started this season, going is first nine games without a goal, but he has poured it on of late.  After going 0-7-7 in those first nine games (but with a plus-9 rating), he is 8-8-16, plus-5, in his last 15 games.  Since he started that run on November 4th, Wilson is tied for 11th overall in points (with John Carlson, among others) and is tied for 11th in goals scored (with Connor McDavid, among others).  The Caps are 4-1-2 in the seven games in which Wilson scored a goal, 6-2-2 in games in which he recorded a point.

What is also noteworthy about Wilson’s 15-game run is that he has only ten penalty minutes in that span, tied for 72nd in the league (with Evgeny Kuznetsov and Carl Hagelin, among others).  The penalty minutes are noteworthy in the context of the season to date for Wilson.  His 1.08 penalty minutes per game is a career low, far below his career low coming into the season – 1.37 penalty minutes per game in 2019-2020.  Meanwhile, his goals per game (0.33) is his second highest goals per game in his career to date, and his 0.96 points per game this season is a career best.  His offensive output has been efficient as well, his 17.4 percent shooting percentage being another category in which he is posting a career best.  In 27 career games against Columbus, Wilson is 3-4-7, even.

Hockey is fickle.  A team can be on the top of their game one moment, and come crashing to earth in the blink of an eye.  The Caps took just 40 minutes to race to a 4-1 lead against the team with the best home record in the league in the Florida Panthers, but in 85 minutes of hockey since then, they have been outscored, 7-3, outshot 55-30 (including being outshot 27-2 in the third period of the 5-4 loss to Florida), blown two third period leads, and was beaten in a Gimmick.  Slumps happen, and a third consecutive loss would qualify as one for this team.  Columbus offers an opportunity to end the nonsense, the Blue Jackets having the worst road record in the Metropolitan Division.  The Caps should be motivated to reassert themselves as a dominant team and put Columbus in a deeper hole than they are in at the moment as a fifth-place team in the division.