The Peerless Prognosticator is ON THE AIR!!! -- Game 33: Capitals at Red Wings: December 31st

The Washington Capitals wrap up the old year and their season series with the Detroit Red Wings when the Caps pay a visit to Little Caesars Arena on New Year’s Eve.  Washington is coming off a hard fought 5-3 win over the Nashville Predators to end their winning streak at seven games, while the Red Wings have stumbled of late, going 2-4-0 after posting a five-game winning streak.

Despite their recent slump, the Wings remain one of the league’s surprises this season with their 15-13-3 record, good enough for fourth place in the Atlantic Division, three points clear of the Boston Bruins, although the Bruins hold five games in hand on Detroit.  There is no secret to the reason the Wings have improved so much over last year’s seventh place finish in the Central Division (realigned to accommodate the COVID-based abbreviated season).  Detroit has improved their scoring offense by 26 percent per game (from 2.23 to 2.81 goals per game) over last season.

The Red Wings’ scoring improvement has come through balance.  Three players have double digits in goals (Dylan Larkin: 15), Tyler Bertuzzi (12), and Lucas Raymond (10), while 11 players have reached double digits in points.  Larkin, who has an overtime goal against the Caps this season in Detroit’s come from two goals down 3-2 win on October 27th in DC, has shown a dramatic improvement in goal scoring, from nine in 44 games last season to 15 in 27 games so far in 2021-2022.  He appears sure to threaten his personal best – 32 goals in 76 games in 2018-2019.

Larkin has been a very efficient shooter so far this season, his 19.2 shooting percentage easily being the best of his career to date (11.1 in 2018-2019 being his best before this season).  What is also noteworthy about his output and efficiency is that Larkin is doing it with less ice time (18:56 per game) than he has had since his sophomore year in 2016-2017 (16:09).  He has been especially productive on home ice, leading the team in goals (nine in 15 games), points (16), and tied with Bertuzzi in game-winning goals (two) while shooting 20.5 percent.  Larkin comes into this game fresh off a hat trick in his last home game, potting three goals in a 5-2 win over New Jersey on December 18th.  He is 3-6-9, plus-1, in 15 career games against the Caps.

Bertuzzi is another Red Wing who is likely to threaten his career best in goals.  He has 12 in 23 games to date, a 39-goal pace that would be well clear of the 21 goals he recorded in consecutive seasons (2018-2019 and 2019-2020).  He has been efficient as well, his 20.0 percent marking his second straight season over 20 percent, although his 25.9 percent last season came in only nine games of work due to back surgery that kept him out for 47 games.  He has been streaky in goal scoring so far this season, opening the year with nine goals in his first ten games, then going 11 without one before breaking that slump with three goals in his last two games going into the contest with the Caps.  Odd Bertuzzi fact… he had four goals in the Red Wings’ first home game of the season and has a total of four goals on home ice in 12 games since.  If he has an odd statistic outside of his offensive numbers, it would be his 17 takeaways recorded so far, tops among all Red Wing skater.  On the other hand, his 26 giveawsys are also most on the team.  Bertuzzi is 0-1-1, minus-6, in eight career games against Washington.

Raymond has to be considered among the front runners for this season’s Calder Trophy as top rookie. He leads this year’s rookie class in goals (10), tied with teammate (and fellow Calder candidate) defenseman Moritz Seider in assists (18), points (28), points per game (0.90; minimum: five games played), tied for first in even strength goals (seven), first in even strength points (22), first in power play goals (three), and tied for second in power play points (six).  Despite this being his first NHL season, the former fourth overall pick of the 2020 Entry Draft ranks fourth in his draft class in games played (31), third in goals (10), second in assists (18), third in points (28), firs in even strength points (22), and is one of seven players in his rookie class with at least one game-winning goal.  He also leads all rookie forwards in his draft class in average ice time (17:27 per game).  If there is an odd fact about his stats, especially as a rookie, it is that he has been more productive on the road (5-13-18 in 15 games) than he has been at home (5-5-10 in 16 games).  He has been a reliable producer as well, posting points in 19 of 31 games played to date.  The Wings are 11-6-2 in those contests.  He comes into this game without a goal in his last seven games, but he has six assists in the same span.  In two games against Washington, he is 0-1-1, even.  He is currently listed as day-to-day in COVID protocol, placed there on Sunday.  Given changes in guidance on isolation (five days), his availability on Friday is uncertain. 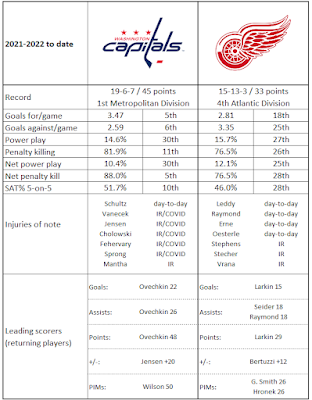 3.  The power play on home ice has improved dramatically for Detroit over last year, from 5.6 percent to 14.9 percent).

5.  Beware the second period against Detroit.  They have more than doubled opponents’ scoring in the middle frame of games played at Little Caesars Arena (21 to 10 in 16 home games).

1.  This contest with the Wings will be the Caps’ 89th regular season contest of calendar year 2021.  With a win, they would finish 56-21-12; they are currently sixth in winning percentage (.693) for the calendar year.

2.  Going into their last game of 2021, Washington’s 3.40 goals per game scoring offense ranks fourth in the league for calendar year 2021.

4.  Washington’s penalty kill has been stellar in 2021, their 83.3 percent penalty kill ranking third in the league in 2021 with one game left to play.

It seems like forever ago, but Sam Gagner was once a sixth-overall draft pick, taken by Edmonton in that slot in the 2007 Entry Draft.  The Oilers would be the first of six NHL stops for Gagner, his first seven NHL seasons spent in Edmonton followed by stints in Arizona, Philadelphia, Columbus, Vancouver, and a second tour in Edmonton before landing in Detroit when Edmonton traded him with a second-round draft pick in 2020 and a second-round draft pick in 2021 for Andreas Athanasiou and Ryan Kuffner in February 2020.  The well-traveled Gagner is in his third season with the Red Wings, and in 79 games with Detroit he is 12-16-28, minus-13.  With four goals in 31 games so far this season, he has a decent chance to reach double digits in goals for the first time since 2017-2018, when he posted ten goals in 74 games with Vancouver.  With 12 points thus far he could reach 20 points for the first time since that same 2017-2018 season when he posted 31 with the Canucks.  He has stepped up his production a bit of late.  After going 2-4-6, minus-4, in his first 17 games, Gagner is 2-4-6, minus-4 in his last 14 games, a slightly better per game production.  Gagner is 1-6-7, minus-4, in 21 career games against Washington.  He, too, was placed in COVID protocol (his second bout with COVID) but was taken off the day-to-day list on Wednesday.

When the Caps suited up for their game against Nashville on Wednesday night, it was the first time in 32 games that the Caps dressed their full complement of centers this season.  No center has appeared in all 32 games this season (Connor McMichael is the only Capital center to appear in 30 games).  Lars Eller has taken the ice 26 times this season and has performed well in a variety of roles, taking turns on the top three lines as injuries and COVID issues mounted among other Capital centers.  Going into Friday’s game against Detroit, Eller is second among the ten centers to play for the Caps this season in goals (six), second in assists (10), second in points (16), second in plus-minus (plus-10), second in shooting percentage (14.0 percent; minimum: 10 games), second in average ice time (17:57), second in faceoff winning percentage (49.1; minimum: 10 games played), second in hits (26), first in blocked shots (16), second in takeaways (15), second in even strength ice time per game (17:14), third in power play ice time er game (1:37), and second in shorthanded ice time per game (1:44).