The Washington Capitals just chugged along in Week 10.  Another winning week.  Sure, there was the loss to “that team,” but the Caps finished the week at the top of the Metropolitan Division standings and tied for the league lead in standings points.  Hard to complain about the results. 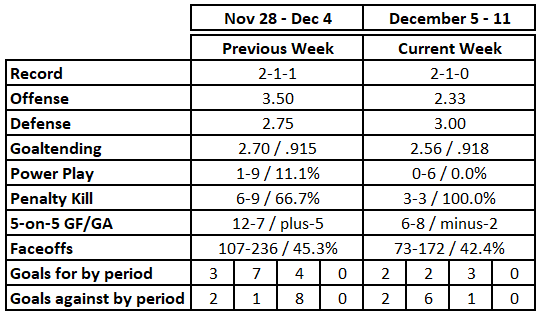 The Caps sandwiched wins around a loss to the Pittsburgh Penguins, only the second loss at home in regulation time this season for the Caps.  On either side of the loss, the Caps battled the Anaheim Ducks to a Gimmick and emerged victorious when John Carlson scored the game-deciding goal.  On the other side, a Caps team that was beat up and looking very much fatigued at times cam back to tie the Buffalo Sabres in the third period of their contest, then won in another freestyle competition when T.J. Oshie did what T.J.Oshie does… or did until he ran into a slump scoring goals in the Gimmick. What Week 10 lacked in production, it made up for it in weirdness.  There was Alex Ovechkin leading the team in points (five), all of them on assists.  With 24 assists at week’s end, he has already surpassed his assist output of each of the last two seasons (19 in 2019-2020 and 18 in 2020-2021) and is on a pace to finish with 70 assists, which would obliterate his career high of 59 in 2009-2010.  There was Lars Eller, who led the team in goals (two), doubling his total for the season.  There was T.J. Oshie, one of the best Gimmick performers ever, breaking a seven-attempt scoreless streak in the fun round (he had not scored in the freestyle competition since February 25, 2020, against Winnipeg), getting the game-deciding goal in the 3-2 win over Buffalo to close the week.  There was Martin Fehervary, who was knocked into a fog against Pittsburgh and sitting out the remainder of that context, coming back the next game and potting a goal.  Six Caps shared in the seven goals, and 11 had points.

It was not quite as odd a week on the defensive side of the puck, but there were things to note.  The Caps, until recently a team adept at minimizing shots on goal, allowed 32. 7 shots per game over the week’s three games.

It was not a particular good week for the Caps individually.  Eleven of 19 skaters finished Week 9 with negative goal differentials at even strength with Justin Schultz, Conor Sheary, and the rarely used Matt Irwin each going minus-2.  Only three Caps – John Carlson, Evgeny Kuznetsov, and Martin Fehervary – finished the week in positive territory, each going plus-1.  Alex Ovechkin was on ice for more even strength goals than any other Capital (five), but being on ice for five goals at evens, he broke even.

If not a great week, it was a good one for the goalies in an all-around sense.  Ilya Samsonov started two of the games, going 1-1-0, 2.93. .909.  Samsonov was particularly effective early in games (.952 first period save percentage) and late (a perfect 20-for-20 in third periods), but in the middle he was lacking, stopping only 19 of 24 shots (.792).  He was good enough in the freestyle competition against Anaheim to stop three of five shots in the Caps’ 4-3 win to start the week, boosting his career record in the Gimmick to 3-2.

The Caps’ power play is sinking like a stone.  Their 0-for-6 week left them 7-for-48 (14.6 percent) over the last six weeks.  And that is 48 chances in 20 games, just 2.40 per game.  They ar now at 2.82 power play chances per game for the season, 19th in the league.  It is just not a place a team with this kind of offensive talent – even without Nicklas Backstrom for the entire season to date – should find itself.

Otherwise, the usual suspects dominated shooting with the man advantage in Week 9.  Alex Ovechkin led with five, Evgeny Kuznetsov had four, John Carlson had two from the blueline.  But the common thread – no goals in about 40 combined minutes of ice time on the power play. 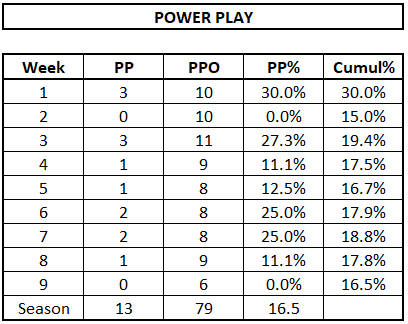 It would be hard to find fault with the penalty killing in Week 10.  First, it was a case of the most effective penalty killing being not having to kill penalties.  No team was shorthanded fewer times thant the Caps for the week (three instances).  They spent just 1:28 per game killing penalties, second-lowest in the league in Week 9. 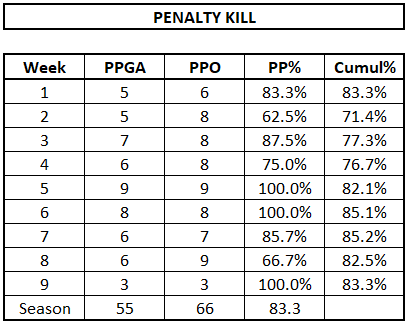 Five Caps took at least ten draws, and only Mike Sgarbossa, at the low end of that list in faceoffs taken, was the only Capital to finish over 50 percent for the week (6-for-10/60.0 percent).  Connor McMichael did not win an offensive zone faceoff (0-for-7), but he was 7-for-10 in defensive zone draws (70.0 percent).  Aliaksei Protas was the only Cap in that five-man list to finish 50 percent or better in both the offensive (2-for-4/50.0 percent) and defensive (4-for-6/66.7 percent) zones.

Second periods did the Caps in for this week.  Outscored 6-2 in the middle periods of games put the Caps behind the eight ball, and the one third period goal they scored did not do much to improve their situation.  That they scratched and clawed their way to extra time in the two games they won is just sort of amazing. 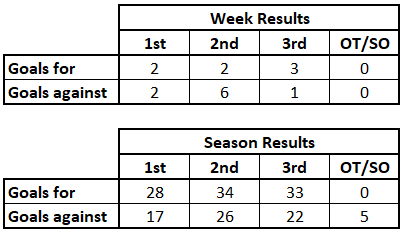 The Caps are now behind last year’s record after 28 games, if only by a tie-breaker. Their scoring defense, shots allowed, and shot attempts percentage at 5-on-5 still point to a team that is better in dominating puck possession, compared to last season.  The continue to play disciplined, their penalties and penalty minutes still far lower in volume compared to last year.  The power play desperately needs improvement to come close to matching last year’s performance, but all things considered, the Caps might be in a similar place in terms of record compared to last season, but this year’s version appears to stand on firmer ground. 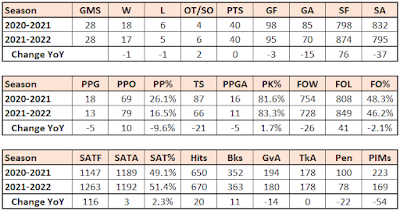 As we said last week in this space, the Caps just keep plugging away.  Eight winning weeks in nine to date; at least two wins in each winning week.  They are not putting together long strings of wins, but they are consistent, the tortoise to the hares who put up five or more game streaks, only to come crashing back to earth.  In the regular season, at least, this is likely to be a winning formula, not just in terms of battling for a playoff spot, but also in competing for a division title and a Presidents Trophy.