The Peerless Prognosticator is ON THE AIR!!! -- Game 41: Capitals at Bruins, January 20th

The Washington Capitals get a chance for some payback when they head north to face the Boston Bruins at TD Garden on Thursday night. The Bruins pasted the Caps, 7-3, in what might have been the Caps’ worst game of the season. But for the most part, the Bruins have been all over opponents recently. They took some of their own medicine when they were pulverized by the Carolina Hurricanes, 7-1, on Tuesday night, but even with that loss, the Bruins are 8-2-0 in their last ten games and have outscored opponents, 41-28 over that span.

In their ten-game run to start the new year, Boston is getting scoring from the players who need to provide it. Brad Marchand (9-7-16), David Pastrnak (8-3-11), and Taylor Hall (3-8-11) are the three Bruins with ten or more points in the last ten games. Marchand might be the player that the fans of 31 franchises hate most, but if you were to describe his season to date, the words “relentlessly productive” come to mind. He has had consecutive games without a point only once this season, that taking place in late October, and only six of 31 games without a point. He has five multi-goal games and 14 multi-point games. He is on his way to having a career year in scoring, the 2.0 goals per 60 minutes and 4.3 points per 60 minutes he has recorded so far being career highs, as are his goals and points per game (0.65 and 1.39, respectively). But true to his reputation, his penalty minutes are up, his 1.65 penalty minutes per game to date being far and away the most he has accumulated in a season to date (1.23 in 2014-2015 being next in his personal rankings). And beware his presence in overtime. His 16 overtime goals are most in Bruins history by a wide margin (Dit Clapper had 10, his last one coming in the 1940-1941 season). It is worth noting that in the six games in which Marchand does not have a point, the Bruins are 1-4-1. He is 17-19-36, plus-1, in 40 career games against the Caps.

Center Oskar Steen is not a household name, but he is a rookie – the rookie, in fact – making any sort of mark for the Bruins this season. He is one of four rookie skaters to dress for the Bruins this season, leads his cohort in games (12) and points (five), and he has the only goal recorded by this Bruins rookie class so far. Steen was a sixth-round pick (165th overall) in the 2016 Entry Draft and displayed some scoring punch in two seasons with the Providence Bruins in the AHL, going 12-22-34 in 83 games. He played in only three games in the 2021 portion of the season, but he has appeared in nine of Boston’s ten games to date in the new year. It is not unusual for some rookies to start hot and cool off, and that has been Steen’s season so far. He was 1-4-5, plus-4, in his first seven games this season, but he is without a point and has a minus-3 rating (all of it earned in Boston’s 7-1 loss to Carolina on Tuesday. Steen is without a point and has a minus-2 rating in two career games against the Caps. 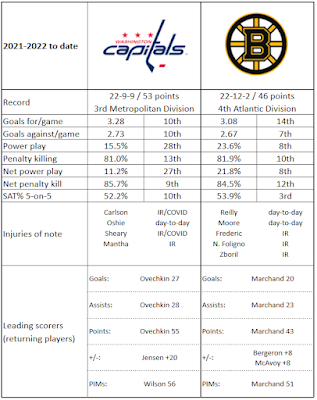 2. The Bruins have 17 different goal scorers in their ten-game run, 21 skaters with points.

3. Boston has been ornery in their recent run of success; four players have more than ten minutes in penalties – Trent Frederic (18), Brad Marchand (13), Eric Haula (13), and Patrice Bergeron (12); 21 different skaters have recorded at least one penalty.

4. Only Florida has more wins by three or more goals in the new year (five) than Boston (four), and only Colorado has more one-goal wins (four) than the Bruins (three).

1. Washington has scored first in five of the seven games they have played since January 1st, but they have only a 1-3-1 record to show for it, their .200 winning percentage being third-worst of the 31 teams to have taken a first lead.

4. In seven games in January, the Caps have had 2.43 power play chances per game, tied for fourth-fewest in the league.

5. The Caps have 11 different goal scorers in January, but only three with more than one – Alex Ovechkin, Tom Wilson, and Conor Sheary (three apiece); Tom Wilson is the only Capital with any game-winning goals (two).

Last season, goaltender Tuukka Rask posted a record of 15-5-2, 2.28, .913, with two shutouts. Not bad for a player who dealt with a hip injury that would eventually require surgery. Rehabilitation meant that he was out of action until he signed a professional tryout contract with the AHL's Providence Bruins on January 6th. Plans to play him ran afoul of COVID though, as games he was scheduled to appear in against the Lehigh Valley Phantoms were postponed. He signed a one-year deal with the parent club on January 11th and made his first appearance this season on January 13th, stopping 25 of 27 shots in a 3-2 win over the Philadelphia Flyers. Unfortunately for the Bruins, he followed that up by allowing five goals on 12 shots in 20 minutes of work in the 7-1 loss to Carolina on Tuesday. He had five days between the two appearances, so it is questionable whether head coach Bruce Cassidy will give him the start with just two days of rest, even with the abbreviated time on ice against the Hurricanes. Working in his favor is that he has not lost to the Caps in regulation in his last five appearances against Washington (3-0-2, 2.17, .927, one shutout). Rask is 4-11-7, 3.03, .894, with two shutouts in his career against the Capitals.

Going into Wednesday’s games, Alex Ovechkin occupies a familiar place, atop the rankings of goal scorers in the league (27). It is testimony to his goal scoring skill that despite being on a 55-goal pace, this season ranks just 11th in his career in goals per 60 minutes (1.8 per 60 minutes), and that his 0.68 goals per game is fifth-highest in his 17 seasons in the league. If he finishes with 50 or more goals – what would be his ninth season of at least 50 goals in his career – he would be the oldest player to ever hit that mark (Johnny Bucyk had 51 goals as a 35-year old with Boston in 1970-1971). If he were to match his 55-goal pace, he would be four years older than the next oldest player to score at least 55 goals in a season (Phil Esposito, who was 32 years old when he recorded 61 goals with the Bruins in 1974-1975).

What argues against Ovechkin hitting either of those marks are his ten-game splits through 40 games. He had ten goals in his first ten games of the season, but in his next three ten-game segments he had five, seven, and five. And, he has one multi-goal game over his last 19 games. On the other hand, he is carrying a three-game goal scoring streak into the game in Boston, and he has 13 goals in 19 games so far this season, seven in his last seven road contests. Ovechkin is 27-28-55, minus-7, in 60 career games against the Bruins.

Boston is 8-2-0 in the new year, the Caps are 2-3-2. But Boston has not been very successful at home. Since opening the season with five straight wins at TD Center, they are 7-6-2 on home ice. The Caps are 4-1-2 in their last seven road games. One would expect the Caps to be sufficiently motivated to inflict damage on the Bruins in their rink, the memory of Boston doing that to the Caps in their rink being fresh. This is likely to be a closer game than their last meeting, and the Caps should have enough to get out with a win.