The Peerless Prognosticator is ON THE AIR!!! -- Game 43: Golden Knights at Capitals, January 24th

The Washington Capitals open the last week of January by hosting the Vegas Golden Knights at Capital One Arena. Washington is still looking for its first win in regulation on home ice in January, their two wins in five home games to date coming in overtime. Those overtime wins were the first such wins for the Caps this season.

Vegas has had their own struggles this month, going 2-3-2 for January, the Golden Knights and their opponents splitting 44 goals down the middle, 22 apiece. The Golden Knights have not dominated on offense (15th in scoring offense in January so far), but they have been balanced. Of 13 skaters with goals, six have at least two, and three – William Karlsson, Jonathan Marchessault, and Mattias Janmark – have three apiece.

Marchessault, one of the original Golden Knights, is the all-time franchise leader in goals scored (111). It was a while coming for the undrafted Marchessault, whose NHL career began when he signed as a free agent with the Columbus Blue Jackets in July 2012. He played in only two games with Columbus before moving on to Tampa Bay via trade along with Dalton Smith for Matt Taormina and Dana Tyrell in March 2014. He played only two games for the Lightning in his first season in Tampa but appeared in 45 games the following season with the Lightning. It was not enough to impress the Lightning to sign him to another contract, and the free agent moved on to Florida in July 2016. He spent one season with the Panthers, where he provided the first glimpse of his goal scoring talent, recording 30 goals in 75 games. Nevertheless, he was left exposed in the expansion draft, and Vegas selected him. Now in his fifth season with the Golden Knights, Marchessault seems to have found a home, and he has delivered as a reliable goal scorer with three 20-goal seasons in his first four years in Vegas and, with 19 goals in 36 games this season, a virtual lock to make it four in five seasons with 20 or more goals. He comes into this game 3-3-6 in his last five games. Marchessault is 0-7-7, minus-2, in 12 career games against the Caps.

Karlsson is the only other Golden Knight to have posted at least 100 goals for the franchise (102). He is another wanderer of sorts, originally drafted in the second round (53rd overall) by Anaheim in the 2011 Entry Draft. He played in 18 games for the Ducks before he was traded a second round draft pick in 2015 and Rene Bourque to the Columbus Blue Jackets for a third round draft pick in 2015 and James Wisniewski. Three seasons later, the Blue Jackets left him exposed in the expansion draft, and Vegas snapped him up. His first season with the Golden Knights was impressive – 43 goals in 82 games and a league leading plus-49 rating. His goal production has dropped ever since – 24 goals in 2018-2019 followed by seasons of 15 goals (in 63 games) and 14 goals (in 56 games) last season. He has six goals in 26 games so far this season, a 15-goal pace if he plays out the remainder of the season. Karlsson comes into this game 3-2-5, plus-1, in his last six games. He is 1-5-6, minus-3, in 16 career games against Washington.

Vegas relies a great deal on its defense to contribute offensively. Every one of the nine defensemen to dress for the club this season have points, and five of them are in double digits. Seven of the nine have goals and have combined for a total of 28 goals. Shea Theodore leads the blueliners in both goals (eight) and points (29). Now in his seventh NHL season and fifth with Vegas, he has established himself as a reliable and productive defenseman in the offensive end of the ice. With one more point he will have his fourth straight season with 30 or more points, and his eight goals in 37 games have him on a pace to eclipse his career best in goals (13 in 71 games with Vegas in 2019-2020). He is also proving to be comfortable with more ice time, his 23:07 per game this season a career high and the third straight season he has averaged more than 22 minutes per game. Theodore is 5-13-18, plus-3, over his last 18 games. He is 0-1-1, plus-3, in eight career games against the Capitals. 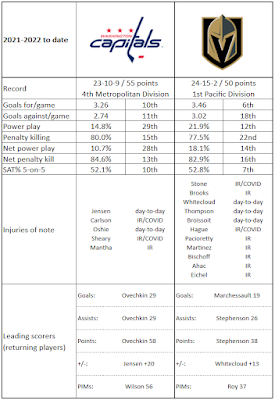 1.  Vegas has the second-best scoring offense on the road in the league this season (3.69 goals per game), trailing only Colorado (3.79).

2. The Golden Knights’ road power play is humming along at 27.8 percent, third-best in the league.

5. In 16 road games, Vegas has taken a lead into the third period eight times and won all of them.

1.  Twenty-five of 30 skaters to dress for at least one home game for the Caps have points.

5. Eleven defensemen have dressed for the Caps this season. All but one have at least one point (Alex Alexeyev is without one in one game played). Four of them have plus-minus ratings over plus-10 (Nick Jensen: plus-20; Dmitry Orlov: plus-17; Martin Fehervary: plus-15; John Carlson: plus-12).

It was a long time coming – 29 games, in fact – but Nicklas Backstrom finally made his way back into the Capitals’ lineup after a lengthy rehabilitation of a hip injury suffered last season. Backstrom entered the lineup without the benefit of a full training camp or early season games that would enable him to skate a full measure of minutes at an NHL pace. Nevertheless, he has been productive in his return. In nine games since coming back, he is 2-6-9, plus-3, very much the same nearly point-a-game player Caps fans have seen for more than a decade. And, he has points in seven of those games (including a game-winning overtime goal in a 3-2 come from behind win over Ottawa in what was his first multi-point game of the season) with even or better plus-minus ratings in seven of those contests.

He has not yet been burdened with a full measure of his usual ice time, his 17:42 per game being lowest of his career to date. That might be expected to change in the second half of the season. There might be some who look at Backstrom upon his return and think him a step slow. Backstrom has never been a player to follow the pace set by others, but rather bends the game to his preferred pace. This might get harder to accomplish as the NHL and its players continuing to get faster. Nevertheless, Bsackstrom is a player with more than 1,000 games on his resume; he can adjust or at least accommodate his game to neutralize the speed advantages some teams will have over the Caps. Backstrom is 4-1-5, minus-2, in six career games against Vegas.

These are two good teams in a bit of a rut at the moment. Both are more offensive than defensive teams, although the Caps (at least earlier in the season) had an underrated defense that limited shots and shot attempts. This game might not be pretty and might end up being one in which the team that can be more consistent over a full 60 minutes comes out with the win. Advantage: home team.