The Peerless Prognosticator is ON THE AIR!!! -- Game 36: Capitals at Wild, January 8th

The Washington Capitals complete their back-to-back set of games for this week with a visit to Xcel Energy Center to face the Minnesota Wild.  As we pen this piece, the Caps are preparing for the first game of their back-to-back set in St. Louis against the Blues, trying to extend a three-game points streak (2-0-1).  The Wild have been like the little girl with the curl over the last six weeks, going 9-4-1, but they opened that run with an eight-game winning streak before posting a five-game losing streak (0-4-1).  They ended that losing streak with a 3-2 win in Boston against the Bruins on Thursday night.  It left them in fourth place in the Central Division, four points out of the division lead with three games in hand on division leader Nashville.

One would have to call the Wild a “veteran” team with six the 28 skaters to dress this season over 30, as are two of the four goaltenders they have employed.  Defenseman Alex Goligoski is the grayest of the graybeards on the team (36 years old).  Goligoski is in his 15th NHL season and, with his arrival in the Twin Cities last July as a free agent, is playing for his fourth NHL team (Pittsburgh, Dallas, and Arizona being the others). Goligoski has never been much of a goal scorer on his own (two seasons with 10 or more goals, an average of 7.3 goals per 82 games), but he has been a very good set up man.  Five times in 15 seasons he posted 30 or more assists; in six other seasons he recorded at least 20 assists (an average of 31.4 assists per 82 games over his career).  This season looks a lot like many of the others, with a 2-19-21 scoring line over 29 games, a 6-54-60 pace per 82 games.  Goligoski has been a consistent offensive producer so far, not going more than two consecutive games without a point through his 29 games played to date.  He has also been more productive at home so far, going 2-10-12, plus-11, in 13 home games versus an 0-9-9, plus-5, scoring line I 16 road contests.  Goligoski is 1-9-10, plus-8, in 23 career games against Washington.

Before this season, the label that might have best described right wing Ryan Hartman would have been “journeyman.”  He was a first-round pick of the Chicago Blackhawks in the 2013 Entry Draft (30th overall), but like many players in the lower half of the first round in that draft class, he underwhelmed when reaching the NHL.  He spent parts of four seasons in all with Chicago, a total of 141 games, and posted a 19-goal season in 2016-2017, his first (and as it turned out, only) full season with the club.  From there he moved on to Nashville, where he spent parts of two seasons, before moving on to Philadelphia for 19 games after a trading deadline deal.  After that brief stint with the Flyers, Hartman signed as a free agent with the Wild in July 2019.  He seems to have found a home, if his production is any indication.  He has 31 goals and 70 points in 153 games with the Wild, all highs among the four cities in which he has played. Wit a team-leading 15 goals in 32 games, he is on pace to surpass his career high in goals, that 19-goal season in Chicago in 2016-2017.  His goal-scoring pace has slowed somewhat, though.  Hartman had 13 goals in his first 23 games of the season, but he has only two in his last nine contests.  Hartman is 1-3-4, even, in 11 career games against the Capitals.

So far this season, 97 goalies have dressed for at least one NHL game.  Cam Talbot is the tenth-oldest of this group (34 years old).  And you have to go all the way to Robin Lehner, the 28th oldest goalie to dress this season, to find one who has appeared in more games (25) than Talbot (24). Talbot has been successful on a win-loss basis (15-8-1), but his underlying numbers have been less impressive – 3.00 goals against average (33rd among 52 goalies to log at leat 500 minutes), .909 save percentage (26th in the same group), .915 even strength save percentage (31st among 51 goalies playing in at least 10 games), .878 save percentage when shorthanded (17th among the same group).  The disconnect is more pronounced at home, where Talbot has an impressive 7-2-1 record, but also has a 3.23 goals against average and a .897 save percentage.  It is the profile of a goalie who looked ready to join the elite level of goaltenders back in 2016-2017 with Edmonton (a league leading 73 appearances, 42-22-8 (led the league in wins), 2.39, .919, seven shutouts, and a fourth-place finish in Vezina Trophy voting), but who has struggled to maintain that level of performance since.  In four seasons after that career year, Talbot was 73-66-12 (20th in wins over that period), 2.96 (53rd of 68 goalies with at least 2,500 minutes), .908 (48th among the same group), with six shutouts in 161 games with four teams (Edmonton, Philadelphia, Calgary, and his first season in Minnesota last year).  This year seems to be an extension of that trend.  Talbot, who is listed as day-to-day with a lower body injury, is 3-7-0, 2.77, .907 in 12 career appearances against the Caps. 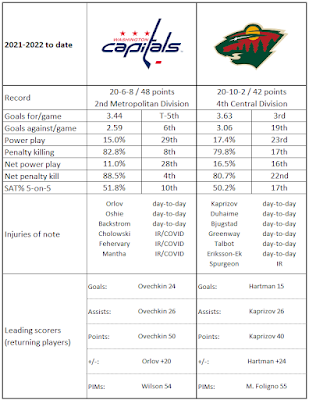 3.  Bad news for Caps fans…The Wild are one of four teams not to allow an overtime goal this season (San Jose, Columbus, and Arizona are the others).

5.  Minnesota is one of four teams in the league with 10 or more one-goal wins (Tamps and Nashville have 12 apiece; the New York Rangers have 11).

1.  The Caps went into Friday’s game leading the league in games in which they scored first (23).  They have 16 wins under those circumstances (tied for third-most in the league).

Kirill Kaprizov will not play against the Caps on Saturday.   He was on the receiving end of this hit from Boston’s Trent Frederic on Thursday night in a 3-2 win over the Bruins in Boston.

It matters.  He has been one of the genuine surprises in his season and a half in the NHL since being taken as a fifth-round pick in the 2015 Entry Draft (135th overall) by the Wild.  In 87 career games to date he has 41 goals and 91 points. This season he already eclipsed his Calder Trophy-winning rookie season 24 assist total in 55 games with 26 helpers in 32 games.  Kaprizov opened this season with points in each of his first three games, all Wild wins.  He had a three games in four with points to open November, all Wild wins.  He had a remarkable 11-game stretch to end November and begin December over which he went 7-14-21, plus-16, including a pair of four-point games, and the Wild went 9-1-1.  He has had ten multi-point games this season over which the Wild went 7-3-0.  The Wild are 9-3-1 in game in which he posted at least one goal, 15-5-2 in games in which he recorded at least one point.  They are just 5-5-0 when Kaprizov failed to record a point.  Only Ryan Hartman has been on ice for more even strength goals (42) than Kaprizov (41), and Kaprizov is tied for fourth among Wild skaters in on ice even strength goal differential (plus-13). His contributions have matter and will no doubt be missed so long as he is out of the lineup.  This would have been his first career game against the Caps.

It has been almost three weeks since Vitek Vanecek saw game action for the Caps   Between COVID protocol, the league pause in its schedule, and the solid play of Ilya Samsonov in front of him on the depth chart, Vanecek as been accumulating a coat of rust.  He is another player who is unlikely to play in this game, unless his non-Covid illness clears up before game time on Saturday (Zach Fucale is currently serving as backup).  It is going to be important to get Vanecek playing time moving forward given the uneven season he has had so far.  Take save percentages.  He started the season with each of his first three games over .915 and .946 overall.  Then came a four-game streak with each game under .900, .861 overall.  That was followed by a four-game stretched over which Vanecek finished over .900 three times and was .922 overall.  That gave way to two games under .900 followed by two games over .930.  He wrapped up his season to date with a .875 performance in a 3-2 loss to Los Angeles on December 19th.

Vanecek has appeared in 16 games this season, which is a lot for a “backup,” even given the unsettled roster over time as a result of COVID and injuries.  But going without work over a three-week period and likely to remain out of action until at least Monday at home against Boston is a situation the Caps must hope gets resolved sooner rather than later.  With apologies to Zach Fucale, who has a shutout in his lone NHL appearance this season, and Pheonix Copley, who has NHL experience, the Caps will be better off with Vanecek as backup and occasionally pushing Samsonov for ice time than with the other two goalies mentioned.  Vanecek likely will have to wait to face the Wild for the first time in his NHL career.

Minnesota is a solid club and a dynamic one on home ice, where their 4.29 goals per game rank third in home scoring offense in the league.  But just as they score often at Xcel Energy Center, so do they allow goals, their 3.07 goals allowed per game ranking just 23rd.  The Caps are not a run-and-gun sort of team, and the trick here, even with Kaprizov (the second leading goal scorer and leading point producer) out, will be to keep this from becoming an 80’s style contest.