The Peerless Prognosticator is ON THE AIR!!! -- Game 37: Bruins at Capitals, January 10th

The Washington Capitals find themselves in an unusual place as they return home on Monday night to face the Boston Bruins.  For the first time since opening November, they find themselves with a three-game losing streak (0-1-2), the result of which is the Caps having fallen to third place in Metropolitan Division and just four points ahead of the Pittsburgh Penguins in fourth place.

On the other side, the Bruins come to DC as winners in four of their last five games to start the new year (4-1-0).  Brad Marchand and David Pastrnak have sparked the recent run of success with three goals apiece. Marchand is also tied with Taylor Hall for most points since the start of the new year (six).  Marchand – the player everyone associated with 31 other franchises loves to hate – is having what is a by now a typical Marchandian year.  Perhaps even better. His 14-19-33, plus-4 scoring line in 26 games puts him on a pace to finish 41-56-97, plus-12.  If he should reach the 41 goal projection, it would be his first 40-goal season of a 13-year career.

And it is this sort of performance that is sometimes obscured by his antics on the ice.  But Marchand has been a first-team NHL All-Star twice in the five seasons preceding this one and a second-team All-Star in two other seasons.  He has received votes for the Hart Trophy as most valuable player in each of the last five seasons (his highest finish was fifth, which he accomplished twice – in 2018-2019 and last season), and he has received Selke Trophy votes as best defensive forward in each of the last six seasons (his highest finish was ninth, achieved in each of the past two seasons).  Only once over the last 11 seasons did he finish with fewer than 20 goals, that being the abbreviated 2012-2013 season when he had 18 In 45 games.  He topped 30 goals in four of the last six seasons, falling two goals short in 2019-2020 and one goal short in 2020-2021, both seasons being cut short due to COVID issues.  Marchand is 15-18-33, plus-2, in 39 career games against the Capitals.

Pastrnak, on the other hand, had a less productive first half of the season in scoring goals than Bruin fans have become accustomed to.  He had a decent, if not dominating start, with eight goals in his first 19 games.  But then he went dormant, going without a goal in nine straight games and managing only a pair of assists for his trouble.  He does seem to be coming out of his slump with three goals in his last three contests, but he is not, at the moment, the goal scorer he was when he shared the Maurice Richard Trophy with Alex Ovechkin as the league’s top goal scorer in 2019-2020 (both players had 48 goals).  Ove the last season and a half, Pastrnak has 31 goals in 79 games.  The drop in production is a reflection of a drop in efficiency.  Over those 79 games he shot to a 9.9 shooting percentage, while over his first six seasons he shot a combined 14.7 percent and never had a single season under 10 percent, and only one below 13 percent.  Pastrnak is 8-13-21, minus-1, in 22 career games against Washington.

Defenseman Charlie McAvoy is consistent.  In each of the last three seasons, including this one, he posted five goals.  The difference being the number of games it took to get there – 67 games in 2019-2020, 51 games last season, and only 28 games so far this season.  He is on a pace to finish with 14 goals this season, which would double his career high of seven goals, accomplished twice, in each of his first two seasons (2017-2018 and 2018-2019).  McAvoy has had an interesting home-road split this season. While his scoring line bears little difference between home (3-8-11 in 14 games) and road (2-7-9 in 14 games), he is a plus-9 on the road but only a minus-2 at home. The difference is in his presence on-ice at even strength in goals scored and goals allowed.  At home he has been on ice for 11 goals for, but 13 goals against, while on the road those numbers are 14 and 6 (that plus-8 goal differential is best on the team).  He’s been on the ice for far fewer goals scored against the B’s in road games.  H has been dangerous in the offensive zone recently, though, with multi-point games in two of his last three contests.   McAvoy, who is listed as day-to-day with a lower body injury, is 1-9-10, plus-11, in 13 career games against Washington. 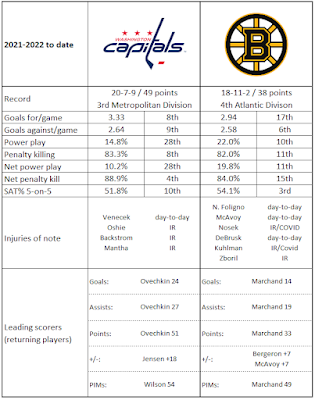 2.  The Bruins’ road scoring defense is third in the league (2.33 goals allowed per game).

3.  Only Pittsburgh has allowed fewer goals in the first period of road games (six) than Boston (eight).

5.  Ten of Boston’s 15 road games have been settled by three or more goals.  They have a 6-4 record in such games.

1.  Washington is undefeated at home in games decided by three or more goals (4-0).

4.  Washington is a net plus-16 in penalties drawn less penalties taken in home games, tied for fourth-best in the league.

5.  The Caps have five shorthanded goals on home ice so far this season, most in the league.

Charlie McAvoy is the go-to defenseman for offense for the Bruins, but Derek Forbort is not all that far behind in offensive production.  Among defensemen, he and Matt Grzelcyk are the only ones to dress for all 31 games this season, he ranks second in goals (four), fourth in assists (three). Fourth in points (seven), fourth in plus-minus (plus-2), first in even strength goals (four), tied for second in even strength points, is one of three defensemen with a game-winning goal, and has been on ice for 20 goals at even strength (tied for fourth).

This is Forbort’s first season in Boston after spending his first six seasons manning the blue line for the Los Angeles Kings (who took him as a 15th overall pick in the 2010 Entry Draft, one spot ahead of Vladimir Tarasenko, taken by St. Louis), Calgary Flames, and Winnipeg Jets.  The Bruins signed him as a free agent last July.  He does come into this game in a prolonged offensive slump, going 0-2-2, minus-1, in his last 17 games.  Forbort is 0-2-2, even, in six career games against Washington.

Nick Jensen is approaching some minor personal milestones.  He enters the new week having appeared in 175 games for the Caps, closing in on the 190 he played in his first posting with the Detroit Red Wings.  Goals are five with the Caps, one short of the six he had in Detroit.  Assists (33 with Washington versus 37 with the Wings) and points (38 versus 43) reflect similar small, and narrowing differences.  The difference is in the quality of his surroundings.  Jensen was minus-14 with the Red Wings, while he is plus-27 so far with the Caps.  That plus-27 is third best among defensemen since his arrival, trailing Dmitry Orlov (plus-48) and John Carlson (plus-28).

One key to success over a long season is avoiding long losing streaks or sluggish stretches.  The Caps are in danger of taking a fourth consecutive loss for the first time this season against the Bruins, who are 5-3-2 against the Caps in their last ten meetings.  It will be a challenge, and it will be interesting to see if the Caps can harness intensity for 60 minutes that has been lacking lately.