The Peerless Prognosticator is ON THE AIR!!! -- Game 76: Capitals at Avalanche, April 18th

The Washington Capitals scored nine goals against the Philadelphia Flyers and eight against the Montreal Canadiens within the past week.  They were the third and fourth times this season that the Caps scored at least seven goals in a game.  Impressive.  But now they take on a club that might be the gold standard for offense in the league.  The Colorado Avalanche, who the Caps will face at Ball Arena on Monday night, have posted seven or more goals nine times in 75 games this season.  It will be one of the biggest challenges the Caps’ defense and goaltending will face to date.

Seven 20-goal scorers.  Three 30-goal scorers.  Seven skaters with at least 50 points, including two defensemen.  One might be forgiven for thinking that the maintenance staff at Ball Arena frequently changes light bulbs in the goal lamps during games.

Mikko Rantanen is not a household name among hockey fans, perhaps even less so among hockey fans east of the Continental Divide.  But Rantinen is the team leader in goals (36) and points (91) going into this contest.  Still only 25 years old, but in his seventh NHL season, Rantanen has established himself as a reliable and prolific goal scorer.  He has 20 or more goals in each of his six full seasons to date, including this one, and he has topped 30 goals three times in the last four seasons.  His 36 goals this season are a career high, as are his 91 points.  His 16 power play goals to date tie a career best set in 2018-2019.  His production has been rewarded with ice time, his 20:54 per game this season being the most ice time of his career to date.  If there is an odd wrinkle in his season to date, it is that his shooting percentage – 14.6 percent – is the lowest of his career.  Even so, his 16.0 shooting percentage since 2016-2017 is 10th among 329 skaters with at least 500 shots on goal over that span.

Rantanen, despite his young age, is proceeding smartly up the all-time franchise rankings.  With 165 goals, he needs only two to tie Alex Tanguay for tenth place all-time in Avalanche history.  His 242 assts rank 14th, as do his 407 points.  He has 65 career power play goals for the Avs, good enough for eighth place on the all-time franchise list, and his 151 power play points rank ninth.  His 23 game-winning goals are tied with Claude Lemieux for 12th place on the team’s all-time list.  Rantanen has been a bit more productive at home (21-30-51, plus-31, in 36 games) than he has been on the road (15-25-40, plus-7, in 36 games), but not overly so.  What he has been at home is consistent in his scoring.  Only once in those 36 games on home ice did he go consecutive games without a point, and since that occurrence to open March, Rantanen is 7-7-14, plus-6, in nine games at Ball Arena.  Rantanen is 6-6-12, minus-3, in eight career games against the Caps.

Cale Makar gets the lion’s share of attention among Colorado defensemen, and rightly so.  But don’t sleep on the season Devon Toews is having on the Colorado blue line.  His 13 goals are tied for sixth among the league’s defensemen, his 44 assists are tied for ninth, and his 57 points are also tied for ninth among the league’s defensemen.  Toews has three game-winning goals, tied for eight among defensemen.  He has 43 takeaways, tied for 15th among defensemen.  His plus-52 rating is tied for third among all skaters in the league, while his plus-51 goal differential on ice at even strength ranks fourth among all skaters.  The plus-minus and even strength goal differential are both tops among defensemen.  On all of those measures – goals, assists, points, plus-minus, takeaways – Toews has established career highs.  In fact, his production so far outstrips previous years, this year’s numbers challenge those he compiled over the previous two seasons combined – goals (13 versus 15 over the previous two seasons), assists (44 versus 44), points (57 versus 59), plus-minus (plus-52 versus plus-30).

Unsurprisingly, Toews has been more productive at home (9-23-32, plus-33, in 32 games) than he has on the road (4-21-25, plus-19, in 32 games).  He did suffer a drought on home ice recently, going without a point in six consecutive games, but he followed that up by going 1-3-4, plus-5, over his last four games at Ball Arena.  It might be worth noting that in the fur losses Colorado has on home ice with Toews in the lineup, he failed to record a point.  The Avs are 28-2-2 on home ice with Toews in the lineup.  Toews is 3-3-6, plus-4, in seven career games against Washington.

On a team with as much firepower as Colorado, what happens in the defensive end can be overlooked.  And “overlooked” might be an apt description of Darcy Kuemper’s career.  When considering the best goalies in the game, his name would never come up, but this is a goalie who has the third-best save percentage in the league (.922) since 2017-2018 among 53 goalies with at least 5,000 minutes played.  Seven times in ten NHL seasons, he posted save percentages of .915 or better, four times (including this season) over .920.  He has the best career save percentage in Avalanche history (.925; minimum: 100 minutes) and the fifth-best goals against average (2.41). 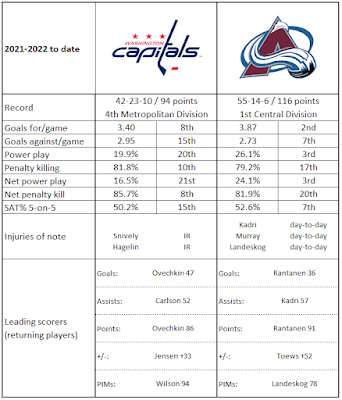 4.  No one is blowing out the Avs on their rink.  Their 13-1 record in games decided at home by three or more goals is best in the league by winning percentage (.929).

3.  Washington has 11 wins on the road when outshooting the opposition, 11 wins when they are out-shot.

4.  Only Carolina and Colorado have more third period goals scored in road games (52 apiece) than the Caps (50).

Kadri has been especially adept at spreading the wealth at home, posting 38 assists in 32 home games to date, a team high and second-most in the league behind Florida’s Jonathan Huberdeau (50).  The odd part of his scoring at home is that his shooting is less efficient.  His 9.4 shooting percentage is quite a bit less than his 13.9 percent shooting on the road.  Kadri has been quite consistent in putting up points on home ice this season, doing so in 27 of 32 games at Ball Arena.  Only once this season has he gone consecutive games without a point, going without one over a three-game stretch from January 14th through January 22nd.  Kadri is 8-9-17, minus-1, in 24 career games against the Caps.

When facing a team with superior skill, make their lives difficult.  Annoy them, get under their skin, get in their way, be physical.  This is the role a player such as Garnet Hathaway plays.  While not quite what one would call an “agitator,” he has the capacity to make opponents wish they were elsewhere doing something else with their time than enduring Hathaway’s badgering up and down the ice.  Not that Hathaway is a player who displays a physical edge at the expense of skill.  In 69 games to date, he already has a career high in goals for a season (13), has equaled a career high in assists (12), posted his first 20-plus point season (25), has a career best plus-20 rating, has four game-winning goals (one off his career best), and he is averaging 13:33 in ice time per game, more than a minute above his previous career high (12:19 set least season).

Colorado is fast, skilled, and deep.  Their defense is, if anything, underrated or, to a degree, laboring in a quietly effective manner in the shadow of their offense.  It is the type of team that the Caps have struggled against at times this season, and what makes it more difficult is the Avalanche’s domination of opponents on home ice.  A win here would be a statement win of the sort that the Caps could use this late in the season.  But with the Caps’ recent gusher of goals scored (30 in their last five games), It could be a wild ride.