The Peerless Prognosticator is ON THE AIR!!! -- Game 71: Capitals at Penguins, April 9th

The Capitals have struggled, particularly at home since January 1st, posting an 18-16-3 record in the new year, the 20th-ranked team in the league in points (39) and a 7-12-1 record at home, 28th in the league in points (15) and in points percentage (.375).  Meanwhile, the Penguins have had struggles of their own over the last 10 weeks, going 14-11-5 since dropping a 2-1 overtime decision to the expansion Seattle Kraken on January 27th, the 17th-ranked team in points earned (33) and points percentage (.550).  After being shut out by the New York Rangers, 3-0, on Thursday night, they come to DC on a three-game losing streak and a 2-5-1 record over their last eight games.

The Penguins have struggled with injuries this season, leaving them with only one skater to dress for all 72 games to date.  Evan Rodrigues is that player, and he has made the most of his opportunity.  He ranks fourth on the team in goals (18), tied for fifth in assists (23), fifth in points (41), tied for fourth in power play goals (seven), second in shots on goal (218), and fourth in individual shot attempts-for/on-ice at 5-on-5 (56.7 percent).  And, he has done this while ranking 11th in ice time per game (16:37) and sixth among forwards in power play ice time (2:03 per game).

Not bad for an undrafted free agent who, in six previous NHL seasons, managed only 34 goals in 234 games with Buffalo and Pittsburgh (a 12 goal pace per 82 games), never so much as posting a double digit goal total in any of those seasons (his high was nine with the Sabres in 2018-2019).  He has been particularly effective on home ice, going 13-12-25, plus-2, in 35 games at PPG Paints Arena.  His shooting percentage on home ice is 11.9, which is not an eye-popping number, but it is almost three times better than his road shooting percentage (4.6 percent, five goals on 109 shots, the same shot total he has to date on home ice).  However, his offensive production has fallen off concurrently with the Penguin’s struggles of late, especially on home ice where he is 3-5-8, minus-1, over his last 18 games on home ice since January 20th.  Rodrigues is 1-4-5, minus-3, in 12 career games against the Capitals.

Over the Penguins’ recent slide, defenseman Brian Dumoulin has been a bit of an enigma.  In his last 29 games, corresponding with the Pens’ fall-off, he has the second-best goal differential/on ice at even strength (plus-7) and is tied for best plus-minus on the team (plus-8, with Radim Zohorna).  However, he has little to show for it personally, posting no goals and three assists over those 29 games.  What is odd about this development is that Dumoulin is having one of his better years offensively overall.  He has never been what anyone would call an offensive defenseman, but his three goals ties for his third-highest goal total with 10 games remaining in this season to add to it.  His 14 assists is also tied for third-highest in his career, while his 17 points stand alone as the third-highest total of his career. 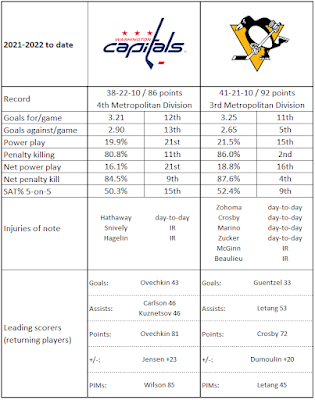 1.  In the all-time series between these teams, Pittsburgh has allowed more goals per game to the Caps on home ice per game (3.38) than they have against any other Eastern Conference team in their history.

2.  Only the New York Rangers and the New Jersey Devils have more all-time wins in Pittsburgh against the Penguins (19 and 30, respectively) than the Caps (18).

3.  Only the Rangers and the New York Islanders have more wins in Pittsburgh against the Pens all-time (eight and 13, respectively) than the Caps (seven).

4.  No team has beaten the Penguins all-time on their ice more when trailing after one period than the Caps (34 wins when they lead the Pens after the first period).

5.  Pittsburgh has lost to the Caps 34 times all-time when trailing after two periods.  Only the Devils (42 wins) and Rangers (41 wins) have more victories in that situation.

1.  In 117 games against the Penguins in Pittsburgh, the Caps trailed after two periods 49 times.  Only once did they win – October 16, 2008, when they erased a 3-1 Penguin lead after 40 minutes with three unanswered third period goals to win, 4-3.

4.  Washington has only two penalty shots awarded to them in games in Pittsburgh all-time.  Dale Hunter and Alexander Semin were the shooters, neither converted.

5.  The leader for the Caps in their all-time series in Pittsburgh in penalty minutes per game is Mike Weber.  He only played one game for the Caps in Pittsburgh, a 6-2 loss on March 20, 2016.  He compiled 19 minutes with a double-minor for roughing, a five-minute major for boarding, and a game misconduct.

Playing in the shadow of Sidney Crosby for most of his career, Evgeni Malkin is among the most efficient scorers in the league over his 16-yeara career, when he is healthy, but we will get to that.  In 16 seasons, Malkin averaged at least a point per game 14 times, and averaged 1.17 points per game over those 16 seasons, third in the league over that span, trailing only Connor McDavid (1.43) and Crosby (1.27).  He is averaging 1.03 points per game this season.  What is odd about his production, though, is that in the 18 games in which he has played on home ice, he has points in 15 of them, but Pittsburgh is just 7-5-3, hardly indicative that his scoring has driven success to an extraordinary degree.

But it is the games played overall that might be significant here – 35 in all.  Malkin has never been an especially durable player, topping 70 games played only five times in 12 full 82-game seasons prior to this one.  Only once in the nine seasons preceding this one did he top 70 games played, dressing for 78 games in 2017-2018, also the last season in which he topped 75 points (42-56-98).  Since 2009-2010, Malkin has played in 733 of 983 scheduled regular season games, just 74.6 percent of the schedule.  For all the attention afforded Crosby’s injuries over the years, he dressed for 808 of those same 933 games (82.2 percent), not exactly iron man numbers, but he has been less brittle than Malkin over the years.  In the 35 games Malkin has played this season, he has been consistent, posting points in 24 of them.  He did have a dry spell in early March, going six straight games without a point, but since then he has points in seven of nine games, going 7-5-12 in those games, three of his goals being game-winners.  Malkin is 24-46-70, minus-13, in 54 career games against Washington.

Jensen has been something of a good luck charm in this regard, if goal differential at even strength is considered.  His plus-20 goal differential is best on the team among all skaters, while his 35 goals scored against the Caps at evens when he is on ice is the fewest among the six Capital defensemen playing in more than 15 games so far this season.  His ice time matters as well.  In 22 games in which he skated at least 20 minutes so far this season, Washington is 16-3-3.  What he might want to avoid, oddly enough, is racking up hits.  In 19 games in which he was credited with three or more hits, the Caps are just 8-9-2, not surprising for a defenseman for whom possession of the puck matter as much as it does for Jensen.  If he’s hitting, he doesn’t have the puck.  Jensen is 1-6-7, plus-7, in 21 career games against the Penguins.

This game has taken on a level of importance than might not have seemed possible even as recently as a week ago.  The Pens are, as noted, 2-5-1 in their last eight games, while the Caps seem to be emerging from a spell of lackadaisical play, if their 4-3 win over Tampa Bay in their last outing is an indicator.  The teams are now separated by just six points in the standings, and the Caps hold two games in hand.  Starting with this game, Washington has a very difficult schedule to close the season, which makes a win in this one important if the Caps are to climb one more rung in the Metropolitan Division standings.