Capitals vs. Panthers: The Cousins Weigh In on Game 5 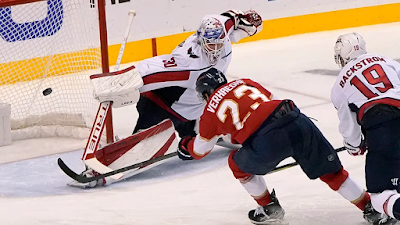 For 25 minutes, the Washington Capitals looked as if they were going to put the heavily-favored Florida Panthers on the brink of elimination.  And then, Florida showed why they were heavily-favored in their series with the Caps, scoring five unanswered goals in a 5-3 win in Game 5 of the series.  It left Capitals Nation shellshocked and the cousins in a mood.  But let’s take a look back with the cousins anyway…

Peerless:  Did you guys think, as I did, that the Caps were going to break through and take a stranglehold on this series when they went up, 3-0?

Fearless:  I did.  This is a veteran team with a lot of postseason experience and knows – or at least should know – how to close out games.  When it was 3-0, especially in how the Caps got their goals – fighting for and getting position in front of the goaltender to tip a long range shot, not quitting on a play and fishing a puck out of the skates of a defender who had know idea where the puck was before snapping it home from the top of the crease, and a gorgeous 2-on-1 rush that was finished in sweet fashion off a perfect feed – it looked as if the Caps could break Florida’s will.  We saw how that worked out.

Cheerless: Cuz, the Panthers are “Team Comeback.”  No team had more wins in the regular season when trailing first than the Panthers (24), and their 24-10-4 record when giving up the first goal was the only one over .500 in winning percentage in that category (.632). They had 11 wins when trailing after two periods, most in the league, and their winning percentage (11-16-1/.393) was best in the league.  And it’s not as if the Caps hadn’t seen that ability to comeback up close and personal.  The Caps took a 4-1 lead into the third period in their last regular season meeting back in November and lost, 5-4…in regulation.  You might not have expected the Panthers to come back, but if you were surprised, you weren’t paying enough attention during the regular season.  It’s what they do.

Peerless: Alex Ovechkin and Nicklas Backstrom, the mainstays of the Caps for years, combined for one point last night (Ovechkin had an assist).  Between them, they have two goals in five games in this series (one for each). While they have figured prominently in the scoring (Ovechkin has five assists and Backstrom four), do they need to be more productive on the goal scoring side?

Cheerless: It’d be nice.  Backstrom is a bit more worrisome.  He has one goal on 30 shots in his last 17 playoff games.  And it might be a bit of a stretch to pin too much blame on him for not scoring goals, the Caps are still just 4-13 in those 17 games.  Ovechkin’s goal production might have different reasons for being slim lately, but he is also struggling with three goals on 41 shots in his last 11 playoff games over which the Caps are 3-8.  They are 37-25 in the 62 playoff games in which he scored a goal in the playoffs.  You have to think he has to break through in Game 5.

Fearless: It has been an odd series for both of them.  Ovechkin has more hits (24) than shots (18); Backstrom has more hits (seven) than assists (four).  Scoring hits has been a rather generous affair in this series; the Caps and Panthers rank first and second in credited hits in the playoffs to date (251 and 225, respectively), but those numbers for Ovechkin and Backstrom would suggest they are not being as productive as they need to be in the respective strengths of their game.

Peerless: Which begs the question…are they healthy?  Backstrom had a long rehab from a hip injury, and Ovechkin missed the last three games of the regular season with an “upper body” injury.

Fearless: Neither of them look right.  There is one telling stat for Backstrom – his faceoff winning percentage.  Eighty-one players have taken at least ten draws so far. Backstrom ranks 80th in that group at 29.6 percent.  One wonders if his wonky hip is giving him enough leverage to win draws.  And, just from appearances, he looks slow.  He has never been the most fleet of skaters, but there are times he looks like a battleship trying to do a 180.

Cheerless: Everyone is nursing some injury or other at this time of year, but what Ovechkin and Backstrom are dealing with, if they are less than 100 percent, is especially important with Tom Wilson’s availability for Game 6 (or seven) questionable.  T.J. Oshie has been a marvel in this series, and he plays with a verve (like that word, cuz?) that inspires teammates, but Ovechkin and Backstrom have been the cornerstones of this team for a decade and a half.  If they don’t produce, the Caps don’t advance.  And it might be a matter of their health.

Peerless: Last night, over the last 35 minutes of the game, the Caps looked like a team that might finally be out of gas.  Is that your take?

Cheerless:  Yeah, they’re the pick-up truck on blocks in the front yard.  This was always an issue lurking in the background with this team this season.  They’re old, and they’ve played a lot of games.  Only three teams have played more playoff games than the Caps (49) over the last five years, including this one.  Eight Caps have played more than 40 playoff games over those five years.  It might not be the end of the road for this team in terms of that “window” folks yak about, but for this season, they just have the look of a team that needs a nap.

Fearless:  No.  This series was always going to be, given the disparate styles of play and philosophy, a matter of which team could impose its will and style on the other most often and over the longest stretches.  The Caps are a heavy team that plays with a deliberate pace, by NHL standards, while the Panthers rely on depth of skill and a swarming offense to shock opponents into submission.  The Caps have had two really bad stretches in which they allowed Florida to play the game to its liking, the lat 17 minutes of the second period in Game 2, when Florida scored three goals in a 5-1 win, and a 19-minute stretch spanning the second and third periods when the Panthers scored those five unanswered goals.  The Caps have been reasonably to very good at controlling pace and style otherwise.  They certainly have it in them to do so again in Game 6.

Cheerless:  If you’re looking at home ice as an advantage, you’re looking in the wrong place.  This team should stay in a hotel, bus to the rink, and wear white jerseys for this game.

Cheerless: Already got my beer and snacks for that game.

Fearless: So that explains the 53-footer with the Coors logo I saw backing up to your shack?

Cheerless: Think I should get another delivery?

Peerless:  Let’s just hope the Caps deliver a win to extend this series one more game.