“Even if I don't finish, we need others to continue. It's got to keep going without me.”
-- Terry Fox

The 2021-2022 season for Nicklas Backstrom might have been the most difficult and, in the end, most heart-wrenching of his career.  In this, his 15th season with the Washington Capitals, Backstrom missed the first 28 games of the season trying to come back from a hip injury, played intermittently over the next eight contests, and then gutted his way to playing in 44 of the last 46 games of the season.  But it was not pretty.  More times than any Backstrom fan would have liked, he looked like a player who, after a decent start upon his return,  just could not catch up from having to miss training camp and almost the entire first half of the season.  And at the end, Backstrom himself hinted at the difficult road ahead when he noted on breakdown day after the Caps were eliminate from the postseason, "obviously we'll see what's going to happen.  We have some decisions to make. Those decisions aren't finalized yet, so we'll take it day by day." 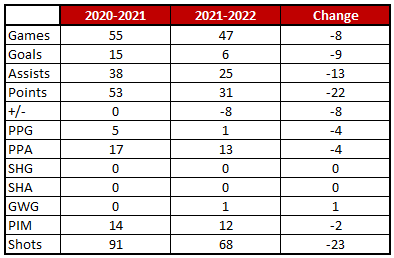 Backstrom actually came out of his hiatus in pretty good shape, going 3-10-13, plus-3, in his first 14 games of the season.  He had points in ten of those games and was second, by one one-hundredth of a point, behind the team leader in points per game (Evgeny Kuznetsov).  He tied Kuznetsov for the team lead in assists over that span.  His personal shot attempts-on ice percentage at 5-on-5 (54.2 percent) led all skaters who played in at least ten games over that stretch.  He was on ice for 13 goals at even strength, second among forwards (Alex Ovechkin: 14), and he was a plaus-4 in goal differential at even strength, tied for second among forwards (Daniel Sprong: plus-5).

It didn’t last, cuz.  It almost didn’t start.  In putting together that 14-game start, Backstrom missed five games.  And it was not as if that pretty good start mattered all that much.  The Caps were 7-6-1 in those 14 games.  In his last 33 games, he was 3-15-18, minus-11, and those last four “tens” look like a fading player.  He did finish six among Caps skaters in that 33-game stretch from February 3rd through the end of the season, but he also had only nine even strength points in that span (he also had nine points on power plays).  Of 20 skaters to play in tenor more games over that span, his 7.7 shooting percentage ranked 16th, next to last among forwards (Johan Larsson was 7.1 percent in 14 games).  And Backstrom, being the sort of player who through the years has done the big and the little things well, struggled in the less visible parts of the game.  His 43.9 personal shot-attempts for percentage at 5-on-5 was worst on the team over those last 33 games among Caps appearing in at least ten games.  And of 181 players to take at least 100 faceoffs over that span, his 44.2 winning percentage ranked 149th.  He had the look of a player who just wore down as the season went on.

Odd Backstrom Fact II… Shooting wasn’t especially kind to Backstrom, either.  The Caps were 7-7-2 when he posted two or more shots in a game; they were 6-4-1 when he did not record a shot.

Game to Remember… March 9th at Edmonton.  When the Caps descended on Edmonton for a March 9th matchup, they were arriving from Calgary, where they beat the Flames, 5-4, the previous evening to extend a winning streak to three games.  Nicklas Backstrom scored points in the latter two games, looking to extend his personal points streak to three games, which would tie his longest of the season, set in his first three games of the 2021-2022 campaign.  He also entered that game against the Oilers with 998 career points.  He notched his 999th point when he opened the scoring with a goal less than three minutes into the second period.  Edmonton would rally to take a 2-1 lead into the second intermission, but in the seventh minute of the third period, Backstrom did what only one Capital and 92 players before him ever accomplished…

It was a typical Backstrom play – understated, subtle, and effective.  Taking a pass in stride at his own blue line, taking a few strides, and hitting T.j. Oshie on the rush with an Oiler defender seemingly in position to break up the play.  It allowed Oshie to break in alone down the right wing and snap a shot past goalie Mikko Koskinen to tie the game.  Unfortunately, however, the game ended in what would be almost a typical Caps fashion.  After Edmonton regained the lead, the Caps tied it in the dying seconds on Oshie’s second goal of the game, but they lost in overtime on a Connor McDavid goal.  For Backstrom, though, the game was historic.

Game to Forget… April 3rd vs. Minnesota.  The Caps had six days to shake off the 6-1 loss that the Carolina Hurricanes pinned on them at Capital One Arena to close the March schedule before the Minnesota Wild came to town on April 3rd.  The hiatus did neither the Caps nor Nicklas Backstrom much good.  Backstrom was ineffective against the ‘Canes – no points, minus-1, 2-for-12 on faceoffs in less than 17 minutes of work.  It would be worse against the Wild.  Minnesota opened the scoring just 36 seconds into the game, and a minute later, they doubled their lead when Tyson Jost took a feed from Jonas Brodin, walked around Backstrom (on his first shift of the game) in front of the Caps’ bench, skated in and scored to make it 2-0 just 97 seconds into the game.  It would be the start of a long day for Backstrom, who finished without a point, a minus-3 rating that matched his season worst (against Boston on January 10th), and no shot attempts in 16:05 in ice time, the third lowest he logged on home ice for the season.  It would be his second straight game without a goal, a streak that would grow to 13 games to end the regular season.

Postseason… Nicklas Backstrom rose to the occasion in the postseason as much as any Capital did.  In the six-game series against Florida, he was 2-4-6, plus-1, posted at least one point in five of the six games, finished tied for second on the team in points, was one of only five Capitals with a plus rating.  It was a significant improvement over his last two trips to the playoffs over which he was just 0-2-2, minus-4, in ten games overall.  This is not to say there were no holes in his game, though.  His personal shat attempts-for at 5-on-5 of 38.8 percent was 17th of 18 skaters dressing for more than one game.  And, of 91 players taking at least ten faceoffs through games of May 22nd, he ranked 86th in faceoff winning percentage (35.1).

Looking Ahead… There is considerable uncertainty with respect to Backstrom’s future with the team, and no one seems to realize this more than Backstrom himself.  His chronic hip condition is perhaps the worst lingering problem a hockey player can endure in terms of sapping his effectiveness, and the range of options available to him to remedy, or at least live with, the effects is wide, from therapy to surgery to, if it comes to that, retirement.  He will be 35 years old in November, and he carries a cap hit of $9.2 million for each of the next three years.  In this past season, 12 centers carried cap hits of at least $7.5 million.  Backstrom ranked last on that list in games played, goals, points, shooting percentage; he was tenth in points per game and 11th in average ice time (source: capfriendly.com).

In the End… Nicklas Backstrom is, for lack of a better term, the “silent warrior,” whose appearance as a low-key personality on the ice disguises a focused and determined player whose skill, attention to detail, and, until his hip problems, durability combined to make him one of the greatest players in team history and one of a small cadre of elite centers of his era in the NHL.  While he might never be the player, health-wise, he was before the hip problems occurred, Nicklas Backstrom has to at least improve on his 2021-2022 numbers to balance cost and value to the club.  If not, the Caps are going to be saddled with a liability that neither the team, nor the greatest center in Capitals history, either deserve or can afford.  What path Backstrom takes in terms of his rehabilitation might be the most important story to follow in the off-season and in the season to come.