When the Washington Capitals traded Madison Bowey and a second round draft pick to the Detroit Red Wings for Nick Jensen and a fifth-round draft pick in February 2019, the Caps might have been hoping for the same sort of spark that Michal Kempny generated for the club when he was obtained via trade with the Chicago Blackhawks a year earlier, a deal that helped propel the Caps to a Stanley Cup.

Things did not work out that way.  The Caps were eliminated in the first round of the postseason by Carolina, and Jensen went without a point in seven games with a minus-2 rating.  In fact, Jensen was rather underwhelming with the Caps in his first season and change with the team, going 0-13-13, plus-4, in 88 games.  He had not established himself as much of a force in the offensive end in his career at that point, being more of a “puck mover” and savvy defender than an offense generator.  But things picked up for Jensen in his second full season with the Caps, going 2-12-13, plus-5, in 53 games in 2019-2020.  He followed that up with a career year this past season, setting career bests in goals (five), points (21), plus-minus rating (plus-32), and recording his first career game-winning goal. 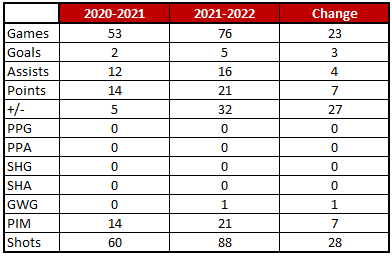 Odd Jensen Fact… That fifth round pick that came with Jensen in the 2019 trade has some interesting history of its own.  The Caps traded this pick and a fourth rounder in the 2019 draft to New Jersey for a third-round pick.  With that pick, 91st overall, the Caps selected Aliaksei Protas, who just wrapped up his first season with the Caps.

Odd Jensen Fact II… Jensen recorded five goals this season, but only one of them came on home ice, in a 6-3 win over Colorado on October 19th.

Game to Remember… October 19th vs. Colorado.  The Caps went into their third game of the season, against the Colorado Avalanche, looking to extend a streak of games with points earned to three.  Colorado split a pair of games at home to open the season before heading to Washington for their first road game of the season.  The Caps broke on top in the seventh minute on an Evgeny Kuznetosv goal, but the Avs tied it with a shorthanded goal in the 14th minute of the period.  Washington scored late in the period when Tom Wilson jumped on a loose puck along the right wing wall in the Caps’ zone and fed it forward to Nick Jensen breaking out of the defensive zone. Jensen led what would become a 3-on-1 break with Alex Ovechkin and Dmitry Orlov.  Jensen fed Orlov in the middle, and Orlov immediately returned the puck to Jensen who stepped up and snapped a shot that beat goalie Darcy Kuemper on the long side over his blocker to make it 2-1 going into the first intermission.

Colorado scored in the fourth minute of the second period to tie the game at 2-2, but the Caps scored a pair of goals less than two minutes apart late in the period to take a 4-2 lead.  The Caps extended their lead in the first minute of the third period when they applied persistent pressure in the Colorado end, the puck eventually finding its way to Jensen at the top of the offensive zone. His shot was turned away by Kuemper, but right to Nic Dowd along the goal line to Kuemper’s right.  Dowd settled the puck and snapped a shot behind Kuemper from a severe angle 39 seconds into the period to make it a 5-2 game and all but end the competitive portion of the evening.  Colorado scored a power play goal with just over three minutes left, but the Caps added an empty net goal to grab a 6-3 win.  The goal and assist for Jensen were his first two points of the season.  He was credited with five hits to lead the team and added a takeaway to earn the game’s second star.


Game to Forget… January 20th at Boston.  The Caps headed to Boston to take on the Bruins having alternated wins and losses over their previous four games.  The pattern suggested things would not go well for the Caps, and they didn’t.  Things started well enough, the Caps scoring just over four minutes into the contest, courtesy of Evgeny Kuznetosv.  The Bruins answered less than a minute later to stall any momentum the Caps might have had, and then they took a lead mid-way through the second period on a David Pastrnak power play goal.  It put the Caps in catch-up mode from that point forward.  They tied the game late in the second period on a Lars Eller goal, but they fell behind again mid-way through the third period on a Jake DeBrusk goal.  The Caps tied the game once more less than a minute later on a Nicklas Backstrom goal, but Boston got the last one, a Charlie McAvoy power play goal with 45.0 seconds left to escape with a 4-3 win.  Jensen logged just 11:35 in ice time – his lowest of the season – suffering an upper body injury that ended his evening in the second period.  He would miss the Caps’ next four games.

Postseason… Jensen has made great strides since joining the Caps, but that has not extended to the postseason.  In this, his fourth postseason with the club, he did not record a point and was a minus-5.  His minus-5 goal differential at even strength was second worst on the team.  Through four postseasons and 26 playoff games with the Caps, he is 0-0-0, minus-8.

Looking Ahead… Jensen ended the regular season third in seniority among active Caps defensemen with 217 games played.  He is fourth among active Caps defensemen in postseason games played.  He will be entering the walk year of his current contract (a $2.5 million cap hit) as one of the veterans the Caps are likely to lean on pretty heavily in 2022-2023.  His number do not jump off the page, but his effectiveness was displayed across a range of categories.  For the Caps to challenge for a playoff spot and a deep run, though, he might very well have to raise his game another notch.

In the End… Hockey is not a subtle game, but there are subtleties to it that lurk in the cracks among statistical categories.  Jensen is the sort of player to exploit them, a player who has become effective as a puck mover to start and provide continuity to plays, to tap into occasional offensive contributions he was not making earlier in his career, and being effective, if not physically dominating, in his own end of the ice.  It made him a valuable asset the Caps need at the top of his game next season and a player worthy of a look to extend his stay in Washington past next season.