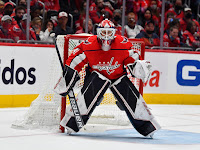 “You have to think of your career the way you look at the ocean, deciding which wave you're gonna take and which waves you're not gonna take. Some of the waves are going to be big, some are gonna be small, sometimes the sea is going to be calm. Your career is not going to be one steady march upward to glory.” 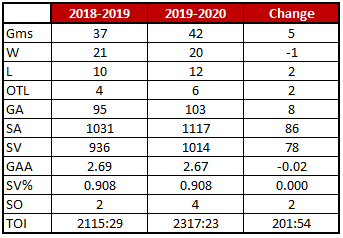 Fearless’ Take… The 2014 Entry Draft was a good one for goaltenders.  Igor Shesterkin, Ilya Sorokin, Thatcher Demko, Ville Husso, Elvis Merzlikins.  And Vitek Vanecek.  One of ten goalies taken in that draft to appear in the NHL, Vanacek has held his own, performance-wise, in his career to date – fifth in games played (79), fourth in wins (41), third in goals against average (2.68), fifth in shutouts (six), second in Gimmick save percentage (.793).

Odd Vanecek Fact III… Vanecek is already in the top ten in wins, all-time, among goalies born in Czech Republic (ninth with 41 wins).

Game to Remember… January 15th at New York Islanders. When the Caps headed to Long Island to face the Islanders in mid-January, they were in the midst of their longest losing streak of the season to that point – four games (0-2-2).  They allowed 19 goals in the four games. Vanecek was coming off a lackluster 12 saves on 15 shots performance in relief of Zach Fucale in a 7-3 loss to Boston in the game before the Islanders contest.

The Caps scored early to take a 1-0 lead, Tom Wilson putting them in front just 4:35 into the game.  Vanecek would make sure that goal held up until Alex Ovechkin scored an empty net goal to give the Caps a 2-0 win.  The 23-save shutout was Vanecek’s first of the season and set him off on a run of four shutouts over a 23-game span.

Game to Forget… March 28th vs. Carolina.  The Caps won back-to-back 4-3 decisions over Buffalo and New Jersey as March was coming to a close, but they would move up in weight class when the Carolina Hurricanes came to Washington for the last game of the month.  The Hurricanes were struggling, going 2-3-2 in their previous seven games and 1-3-1 in their previous five road games.  The Caps fell behind early, trailing by a pair of goals at the first intermission.  The Caps halved the lead on a Tom Wilson goal in the seventh minute of the second period, but Carolina scored three times in a span of seven minutes to end the competitive portion of the game and Vanecek’s evening after 40 minutes.  The five goals Vanecek allowed on 23 shots marked the first time in his career he allowed five goals in regulation in a game on home ice.  Starting with that game, he finished the regular season with a 3-3-1 (one no-decision), 3.61, .864 record in eight games.

Looking Ahead… Vanecek is an arbitration-eligible restricted free agent.  Given that the Caps left him exposed in the expansion draft, where he was selected by Seattle, they would not seem completely wedded to the idea that he will be with the club going forward.  But complicating matters is the inconsistent play of the goalie the Caps hoped would take the number one job by the throat in 2021-2022 – Ilya Samsonov.  Vanecek’s just-expired contract had a $716,667 cap hit, and it would seem unlikely he would be getting much of a raise on a new deal.

Are the last two remarkably similar seasons for Vanecek a floor for his performance from which he will improve, or is it a ceiling that will retard his progress?  How the Caps see that future will be the basis for not only his future with the team, but possibly that of his partner, Samsonov, also an arbitration-eligible free agent who, even with his inconsistent season, would likely place a heavier burden on the Capitals’ salary cap (his cap hit in 2021-2022 was $2.0 million, all of it in base salary).  In what will be just his third season in the NHL, Vanecek might have come to a career crossroads.