"If your actions inspire others to dream more, learn more, do more and become more, you are a leader."
-- John Quincy Adams 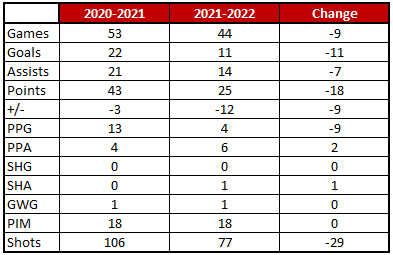 Fearless’ Take… Over those 457 games Oshie has played for the Caps, only Alex Ovechkin has more goals per game (0.59 to 0.35) among players appearing in at least 100 games over that span, and Oshie ranks fifth in points per game, fourth among forwards (0.71).  This season, the difference in Capitals success was even more pronounced with Oshie in the lineup.  The Caps averaged 1.34 standings points per game when he was in the lineup (26-11-7), 1.08 points per game when he was not (18-15-5).  Washington was 12-3-4 when he posted at least one point this season.  Among Caps appearing in at least 20 games, he was fifth in credited hits per 60 minutes, his 6.72 hits/60 being most of his career.

Cheerless’ Take… There is a flip side to some of those number, cuz.  Take points.  Sure, the Caps were successful when he posted points, but he didn’t do it all that often.  His 0.57 points per game was a career low.  About hits… the Caps were 15-8-1 when he recorded at least two, but they were also 11-3-6 when he was credited with fewer than two.  His minus-10 goal differential at even strength was the worst of his career, and in only 44 games. A critical element of the power play, he averaged only 8.2 shots per 60 minutes with the man-advantage, third lowest of his career and lowest as a Capital.  His 49.0 shot attempts-for on-ice at 5-on-5 was the lowest of his career.  His numbers were an odd counterpoint to the success the Caps had when he played.

Odd Oshie Fact II… When Oshie recorded a hat trick against the Ottawa Senators in a 7-5 win on October 25th, it was his third hat trick in the regular season for the Caps.  All of them have been on the road (March 18, 2017 at Tampa Bay and May 5, 2021 at the New York Rangers being the others).

Odd Oshie Fact III… Despite being a winger, Oshie was often called upon to take faceoffs. He took 169 draws in 44 games this season.  In 14 games in which he was over 50 percent in faceoff wins, the Caps were 10-3-1.

Game to Remember… October 25th at Ottawa.  The Caps started their season with points in five straight games, going 3-0-2 before heading to Ottawa for a matchup with the Senators.  Oshie had a modest start, posting a goal and an assist in the seasons’ first five games.  The game against Ottawa would be more productive.  After the Senators opened the scoring less than three minutes into the contest, Oshie got the Caps even in the seventh minute when the Caps took advantage of a turnover by the Senators deep in their own zone.  Trevor van Riemsdyk gobbled up the loose puck and fed Oshie darting to the net out of the corner to the right of goalie Anton Forsberg.  Oshie snapped a shot past Forsberg on the far side, and the Caps were tied.  Less than five minutes later, it was Oshie again, giving the Caps the lead, Anthony Mantha and Connor McMichael getting the assists, McMichael recording his first NHL point.  The Caps chased Forsberg with two more first period goals to take a 4-1 lead to the first intermission, but the Senators stormed back to start the second with three goals in less than seven minutes to tie the game, 4-4.  Alex Ovechkin put the Caps back in front with a goal late in the period, and Oshie then completed the hat trick with 7.3 seconds left in the period when he took a feed from McMichael behind the Ottawa net, circled out, and tucked the biscuit under the left leg pad of relief goalie Filip Gustavsson.  It would prove to be the game-winning goal in the Caps’ 7-5 win and Oshie’s only game-winner of the season.


Game to Forget… January 15th at New York Islanders.  Oshie has had a career’s worth of success against the Islanders, going 15-16-31, plus-11, in 38 career games against the Isles.  That 38th career game was not among his most successful.  Oshie skated only two shifts and 1:46 in ice time when he suffered an upper body injury.  The Caps would win this game, 2-0, but Oshie would go on to miss 14 games, the Caps going 7-7-0 in that stretch.

Postseason… Oshie had a productive series for the Caps in their loss to Florida in the first round.  He led the team with six goals, four more than any other Capital and almost a third of the team’s total (19).  He finished with a plus-2 rating, tied for second best on the team, and a plus-2 goal differential at even strength fueled by being on ice for a second-best five even strength goals.  He was credited with 24 hits, fourth on the team and third among forwards, and he led the team in shots on goal (22).  There were a couple of bad numbers that stood out, though, one of them being his two takeaways while recording 11 giveaways, most on the team.  He also had a 38.6 percent shot attempts-for percentage at 5-on-5, worst on the team in the series for players appearing in more than one game.

Looking Ahead… It is hard to look forward without looking back on Oshie. In seven years with the Caps, he has missed 78 regular season games.  It is perhaps the price a player pays for playing a rough and tumble style that might be more appropriate for a bigger player.  So, the question becomes whether Oshie, who will turn 36 years of age in December, can flourish and remain healthy playing the way he does going forward.

Oshie is something of an unusual case, the team performing well when he is in the lineup even when his numbers suggest a lesser outcome at times.  He does seem to have an intangible quality that lifts the game of teammates.  For 2022-2023, Oshie will carry a $5.75 million cap hit that will extend for an additional two seasons with a modified no-trade clause (he can submit a ten-team no trade list).  It makes it important for the Caps that he maintain his health for economic as well as performance considerations.  It will be a matter that bears watching as the new season begins in October.

How many of the minus were at the end of a game trying to tie game...with a empty net..osh is the heart ❤️ of this team..he does not just think about his stats like some...ovi...total TEAM pkayer