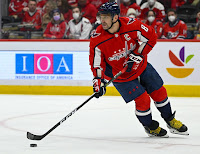 “Most of the things worth doing in the world had been declared impossible before they were done.”
-- Louis D. Brandeis

When Justice Louis Brandeis authored those words, he was speaking of the pursuit of equality.  But the sentiment applies to any number of pursuits, even hockey.  And Alex Ovechkin finds himself on the last legs of a journey thought to be impossible just a few short years ago.  Ovechkin will go into the 2022-2023 season with 780 career goals, 114 goals behind Wayne Gretzky’s once considered impossible to top 894 career goals.  He will not reach that mark this season, but having recorded his record-tying ninth 50-goal season last year, he is approaching striking range of that record and, more to the point, continues to post numbers at his age that themselves seem to border on the impossible.

In seven seasons since he turned 30 years old, he has 305 goals.  Unsurprisingly, this total tops all NHL players over the period.  But it is also the eighth highest number of total goals scored in the NHL by a player from his age-30 season onward.  Of the ten players in NHL history to record at least 300 goals starting with their age-30 season, only Phil Esposito had more goals from his 30-year old through his 36-year old season (333).  And, being 110 goals behind Gordie Howe, the leader in this category with 415, Ovechkin seems a decent bet to one day top this list.

While one might wonder just how long Ovechkin can continue his assault on the record book, his 2021-2022 season gave no indication that his decline, inevitable as it might be, is imminent.  He was fourth in the league with 50 goals, and he posted a 90-point season, the first time he hit the 90-point mark since 2009-10 (109 points) when he was 24 years old.  He also had his first shorthanded goal since the 2008-2009 season.

Odd Ovechkin Fact… Alex Ovechkin is, and will forever be known as a goal scorer.  But he is the active leader among left wings in career assists (630), almost 200 more than the second-place player (Brad Marchand with 444).  Among active forwards, only Patrick Kane has more (750) among non-centers.

Fearless’ Take… Alex Ovechkin has never been shy about shooting the puck.  Over his career he averages 4.76 shots per game.  But with age and experience, his shot totals have diminished a bit.  Not that he’s become meek, he averaged 4.34 shots per game last season, the 15th time in 17 seasons he averaged more than four shots per game.  But with the tip in shooting frequency, he has become more efficient.  In his first 13 seasons his best shooting percentage was 14.6 percent in 2007-2008, when he had a career high 65 goals.  Over his last four seasons he topped 15 percent three times, including last season (15.0 percent).  And, he continues to be among the most durable players in the game, especially for one with as many seasons on his resume.  Since his 30-year old season in 2015-2016, 1,719 players have dressed for at least one game.  Ovechkin, who played in 77 games last season, is tied for 34th on that list in games played (514).

Cheerless’ Take… Ovechkin had an odd statistical combination that might not appear all that flattering.  He had 50 goals, but only five of them were game-winners.  He became jus the third player in NHL history to post at least 50 goals and have five or fewer game-winning goals three times (Wayne Gretzky and Michel Goulet are the others).  He had only one game-winner in his last 26 games on home ice.  Ovechkin also topped 20 minutes of playing time 46 times; the Caps were 18-19-9 in those games.  They were 25-3-3 in the 31 games he played less than 20 minutes.

The Big Question… Do the Caps need to have another big start from Ovechkin this season, and if so, does he have it in him?

Alex Ovechkin got off to a spectacular start last season.  In his first 33 games, covering the 2021 portion of the season, he went 24-26-50, plus-21.  He had five multi-goal games, including a hat trick against Florida in a 4-3 win on November 26th, and 16 multi-point games, including a four-point game on Opening Night in a 5-1 win over the New York Rangers.

This season, given injuries, the Capitals might need a similar start.  In the 2021 portion of the season last year, Nicklas Backstrom and Tom Wilson combined for nine goals (all by Wilson).  Wilson also had 24 points.  The Caps have added some players – Connor Brown and Dylan Strome, for example – who could provide some offensive punch, and the Caps could get by with a bit less offense with more reliable goaltending in Darcy Kuemper.  But getting Ovechkin off to a good start would seem a critical ingredient to get the Caps through the first couple of months until Wilson returns to the lineup, barring any setbacks in his rehabilitation from knee surgery.

Alex Ovechkin is not the best player in the league.  It has been some time since he was even in that conversation.  But no player in the league is chasing so much history, and it isn’t close in that regard.  Career goals, 50-goal seasons, most goals with one franchise, most 50-goal seasons after age-30, most career multi-goal games, and on and on.

And the thing is, his pursuit of personal records aligns with the Caps’ need for him to produce with a thinner lineup at forward than the team would like to start the season.  He has been consistently productive in the early going over the last several seasons.  If he continues that pace, the Caps are likely to avoid falling behind and out of a playoff-eligible spot in the standings until they get healthier.  And with that, records that might have seemed unlikely, if not impossible just a few years ago could suddenly become Ovechkin’s.