If yesterday was Skating Day, today was Scrimmage Day as Groups B and C faced off against one another in the second half of the day’s action. The first half of the day’s proceedings – staring at 10:00 – featured Group A going through drills for almost 90 minutes. Just as was the case yesterday, there was an emphasis on skating, but the session included more offensive zone sets sprinkled in. There seemed to be a marked drop in the intensity level after the first 60 minutes. Maybe the guys were saving themselves for the board-to-board version of the Herbies that ended the morning.

Nicklas Backstrom skated the entire session (he left early yesterday), although it looked from here as if there was just the trace of favoring an ankle at the end of the skate.

Alex Ovechkin, who apparently doesn’t like to lose at anything, finished first in his group in each phase of the Herbies at the end of the morning.

Michal Neuvirth took a puck high near his mask, and it seemed to faze him. He took a few seconds on all fours in the crease and spent the next few minutes shaking it off, but he recovered to look pretty sharp by the end of the morning. 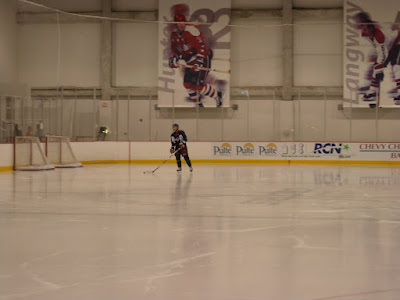 Oh, to be young with a half dozen pucks and the rink all to yourself... 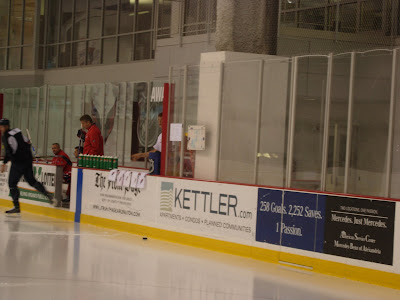 The man behind the pillar...Alexander Semin, practicing his "puck toss"
(points if you get the reference) 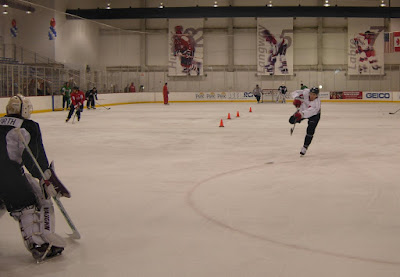 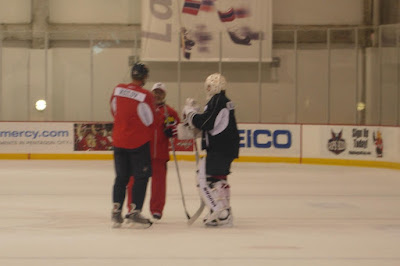 Viktor...tell Simeon not to commit so early on shots.
(Kozlov)..."Coach says, the blue in your jersey sets off your eyes." 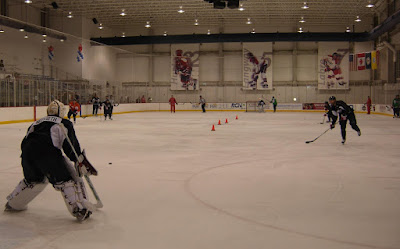 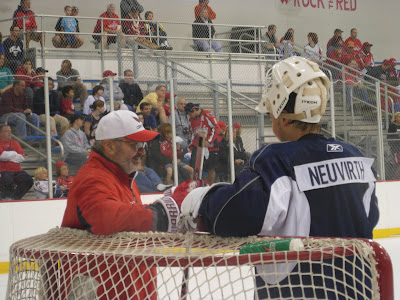 Even the breaks are filled with imparting advice...

In the afternoon, it was time for the first scrimmage – Group B against Group C in Game One of the Duchesne Cup round robin. The top goalies started for their respective groups – Jose Theodore for Group B (in blue) and Brent Johnson for Group C (in white). Braden Holtby and Daren Machesney relieved for the last two “periods” of the scrimmage (which looked to follow a 30-20-10 minute running time format).

We were paying special attention to Chris Clark, and he came through the scrimmage looking as if the injury suffered last year was giving him no trouble.

Gotta give Mathieu Perreault credit – he was sticking his nose in where the big trees live on a few occasions.

Michael Dubuc had a couple of fine chances, one on a nice set up from Dmitri Kugryshev, but was unable to convert.

Alexandre Giroux and Tomas Fleischmann scored on similar plays, not giving up on the puck moving across the crease, finally potting the puck when the goalie was down and out. 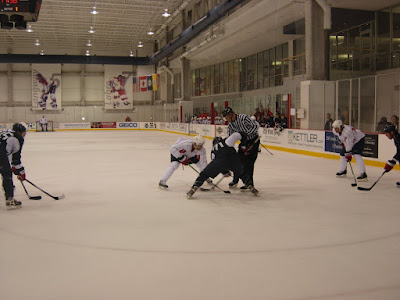 For the uninitiated, this is called a "faceoff." 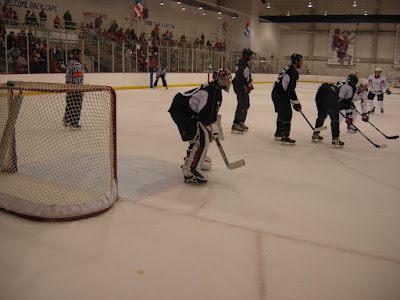 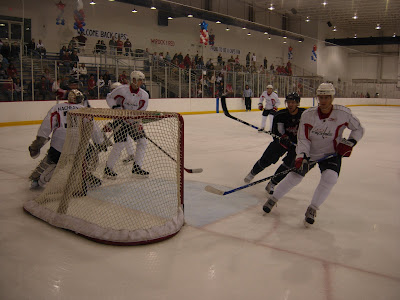 Machesney... "Please don't tell me it went in." 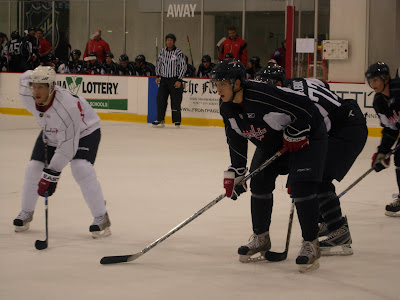 These guys are getting younger every year.