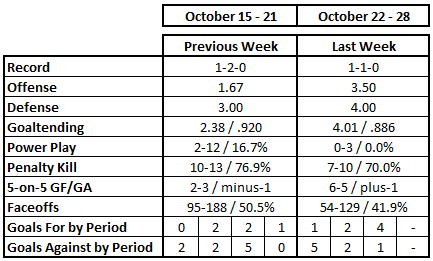 This was Western Canada Week for the Caps, and the 2017 version had a spooky resemblance to the trip the Caps made to the provinces last year. You might recall that the Caps dropped the opener of their trip last year to the Edmonton Oilers, 4-1.  Compare that to the 6-2 drubbing the Vancouver Canucks laid on Washington in the first game of this year’s trip.  In the second game of last year’s trip the Caps made use of a two-goal third period to pull away from the Canucks in a 5-2 win.  In the second game of this year’s trip, Washington scored five unanswered goals on the Edmonton Oilers after falling behind, 2-0, three of them in the third period, to take a 5-2 decision.

Splitting the two games for the week left the Caps in sixth place in the Metropolitan Division, five points behind the surprising New Jersey Devils in first place.  Of more concern is that they are outside the playoff mix at the moment, one point behind the second wild-card team, the Philadelphia Flyers (12 points).

The Caps suffered from a lack of balance in goal scoring over the first three weeks of the season, and if there was a sliver of silver of the lining of the cloud that was Week 4, it was getting some more balance.  Chandler Stephenson scored his first NHL goal in the Caps’ loss in Vancouver.  Jay Beagle recorded his second goal of the season, and Devante Smith-Pelly scored his first as a Capital in the 5-2 win over Edmonton.  Lars Eller got his first of the season on a one-timer in that win over the Oilers.

Then there was the top line and an odd switch in roles.  Evgeny Kuznetsov recorded his first three goals of the season in Week 4, one against Vancouver and two against Edmonton.  It was Kuznetsov’s fifth career multi-goal game and second in Edmonton. He had a hat trick on Oilers’ ice in a 7-4 win on October 23, 2015.  Meanwhile, Alex Ovechkin had a four-assist week, three of them coming against the Oilers in the 5-2 win.  For Ovechkin it was his 12th career game with three or more assists and his first since he had three in a 6-5 loss to the Arizona Coyotes on November 2, 2014.

The Caps started the week as if they had a team case of jet lag, allowing 15 shots on goal and three tallies to the Vancouver Canucks in the first period of the game that opened the week.  Or perhaps it was the rust that accumulated from having no game action from Saturday (a 4-1 loss to Florida at home) to Thursday against the Canucks.  In that respect it was also similar to last season' trip to the west when the Caps dropped a decision to the New York Rangers at home, and then having no game action until the following Wednesday in Edmonton, where the Caps allowed a pair of goals on ten shots in what would be a 4-1 loss.

Shots allowed continue to be a problem.  The Canucks didn’t need many after their 15-shot first period but still finished with 30, the eighth time in ten games that the Caps allowed 30 or more shots. Edmonton recorded 40 shots on goal in the 5-2 Caps win, and it was not score effects.  The Oilers had 16 shots on goal (and both goals) in the first period, 14 more in the second period.  It was the second time this season that the Caps allowed 40 shots to an opponent, the other being when Tampa Bay recorded 40 in a 4-3 overtime win for the Lightning on October 9th.

If there was a bright spot, it was the job that the Caps did on Connor McDavid in the win over the Oilers.  McDavid went into that contest having recorded a point in each of the Oilers’ first five home games this season (4-3-7, plus-2) with 22 shots on goal (4.4 per game).  Washington did not shut him out (he did have an assist), but did hold him to two shots after the first period and rendered him irrelevant in the outcome.  For that, Caps fans might thank Nicklas Backstrom, whose shifts often overlapped significantly with those of McDavid (shift chart from nhl.com; click for a larger image):

This is where that whole, “you are only as good as your last game” idea comes into play, because for the first four periods of the week, the goaltending for the Caps was gruesome – 6.00, .826.  But then there were the last 40 minutes of the week in which Braden Holtby stopped all 24 shots he faced and looked more like the confident and aggressive goalie he has been over the last few years.

The odd part of the goaltending situation is how different the two goaltenders have been.  Holtby, despite a 2.75 goals against average, has the 15th best save percentage among 42 goalies with at least 200 minutes of ice time (.919).  Not quite up to his recent standard, but not bad, all things considered.  Philipp Grubauer has just not found a comfort zone yet.  Among those same 42 goalies with at least 200 minutes he is 41st in goal against average (4.67) and dead last in save percentage (.850).  With seven saves on eight shots in 25 minutes of work in Week 4, he actually improved that save percentage.

In Week 4, it was all about the opportunities.  The Caps had three, all of them in the loss to Vancouver, two of them coming in the third period of that game, after the competitive portion of the contest was settled.  The Caps could only draw what was a coincidental delay-of-game penalty against Edmonton and did not have a power play in that contest.

The Caps did have their chances against Vancouver, recording six shots in 4:31 of power play ice time, and they got the shots from players they want to take them – two from Alex Ovechkin, two from Evgeny Kuznetsov, and one from John Carlson (Alex Chiasson had the other).  But the opportunities were spare and the timing of them was not particularly relevant to the outcome. 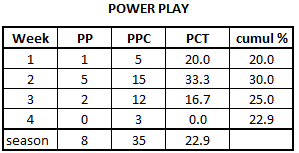 Week 4 was the bad and the good.  Going 3-for-6 on the penalty kill against the Canucks in the first game of the week was, if not the difference in its entirety in the decision, then the largest part of it.  It was a case of taking too many penalties (eight that resulted in six power plays) and allowing too many chances (11 shots on goal in 7:28 of ice time).

Things improved, to a degree, against the Oilers.  The Caps still allowed Edmonton four man advantage opportunities (two of them in the odd occurrence of Lars Eller being whistled twice for shooting the puck over the glass; combine that with his goal in that game and “shooting” was his theme for the night), but they allowed only six shots on goal in eight minutes of shorthanded ice time, none of them from Connor McDavid. 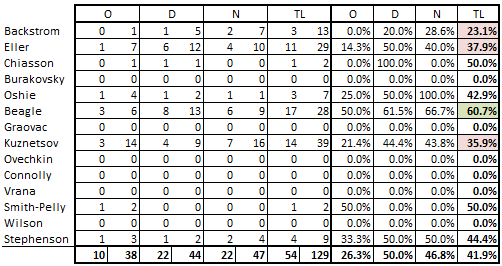 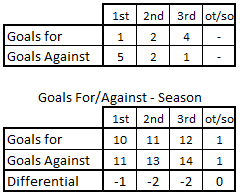 The Caps were without arguably their top defenseman (Matt Niskanen) and a top-six forward (Andre Burakovsky) for both games.  Nicklas Backstrom missed the Vancouver game due to illness, while Brett Connolly left the Vancouver game early under a concussion protocol after being checked into the glass and missed the Edmonton game.  That is a lot of offense missing.  But the Caps are still allowing far too many shots on goal to anyone’s liking (more than 33 per game).  They still have to demonstrate they can achieve a measure of balance in scoring.  They need more consistent goaltending.  These are the problems of a team that might be bouncing along the margin of playoff eligibility all season unless they can make progress in finding solutions.