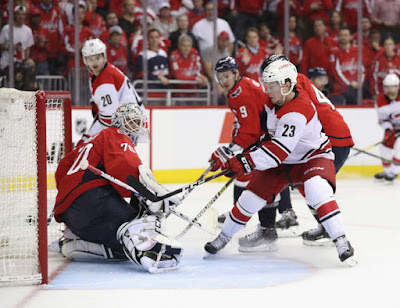 It was Holtby’s third overtime Game 7.  No goalie has had more (tied with four others).  He is now one of 6 goalies in NHL history to lose two Games 7 in overtime, even with a 1.86 GAA and .938 SV in those three games. May there never be a third loss.
Posted by The Peerless at 8:22 AM No comments:

The Washington Capitals and Carolina Hurricanes faced off in Game 7 of their Eastern Conference quarterfinal series at Capital One Arena on Wednesday night. It took extra time, and when it was over, it was the Carolina Hurricanes eliminating the defending Stanley Cup champions, 4-3, in double overtime.

The Caps spent little time easing into the contest.  Andre Burakovsky was a one-man wrecking crew in the third minute of the game.  He chased down Lucas Wallmark at the right wing wall and finished a check as Wallmark dumped the puck into the corner.  He then pivoted and homed in on Brett Pesce, who was having trouble controlling the puck.  Burakovsky stripped him of it and stepped out through the right wing circle.  Faking Trevor van Riemsdyk to the ice, Burakovsky skated through the low slot and roofed a shot over the glove of goalie Petr Mrazek and under the crossbar to make it 1-0, 2:13 into the period.

Then it was time for Alex Ovechkin to author a highlight reel play that stands among the best highlight plays of his career.  After both teams completed line changes, Dmitry Orlov sent a long pass from behind his net to Ovechkin on the Carolina side of the red line.  Ovechkin gathered in the pass and then backhanded a pass off the side wall at the players’ bench to free himself from Dougie Hamilton.  Ovechkin raced down the right side through the faceoff circle, beating Jaccob Slavin to the puck and drawing it around the sliding defenseman.  Closing on Mrazek, he fed Tom Wilson for a one-timer that found the back of the net, and the Caps had a 2-0 lead 6:23 into the period.

The teams exchanged power plays later in the period, but there was no further scoring.

-- The teams split 20 shots on goal down the middle, ten apiece, but the Caps had a slight 21-20 edge in shot attempts.

Washington had a chance to put the Hurricanes in a deep hole when they were awarded a power play in the ninth minute of the period.  It would be Carolina that would take advantage, though.  Sebastian Aho converted his own rebound from the edge of the left wing circle at the 9:51 mark to halve the lead.

The Caps restored their two goal lead less than four minutes later. Evgeny Kuznetsov eluded two Hurricanes while skating the puck down the right wing wall.  He nudged it ahead to Carl Hagelin, who carried it into the offensive zone.  Filling in the middle behind Hagelin, Kuznetsov took a return pass and had several options available – a pass to Hagelin for a one-timer, a pass to his left for a Jakub Vrana one-timer, or take the shot himself.  He dialed up the last option, snapping a shot over Mrazek’s blocker to make it 3-1, 13:22 into the period.

Carolina got that one back later in the period when Teuvo Teravainen collected a sliding puck in the slot, turned, and snapped a shot through Holtby at the 16:37 mark.  That closed the second period scoring for both teams.

-- The teams were even in shots in the second period at nine apiece.  The Caps had a 19-18 edge in shot attempts.

Third periods have been an issue in this series and all year long for the Caps, and it took Carolina less than three minutes to tie the game.  Jordan Staal curled through the right wing circle and wristed a shot that beat Holtby cleanly to the far side, the game tied 3-3, 2:56 into the period.  Despite some back and forth, and a series-saving swipe of the puck out of the Hurricane crease by Brock McGinn late in regulation, the teams would finish 60 minutes tied, 3-3.

Tension.  Suspense.  Pressure.  And no goals.

“Mr. Game 7,” Justin Williams, put the Caps out of their exhausted misery, setting up the game-winning goal by firing a shot from the right wing to the Caps’ net, where Brock McGinn redirected it out of mid-air and past Holtby’s blocker to end the contest at the 11:05 mark of the second overtime, thus ending the Caps’ reign as Stanley Cup champions.

-- Over the last period in regulation and two overtimes, Carolina out-attempted the Caps, 52-35.

-- The Capitals never trailed on home ice until the series’ final shot on goal.  Not one second.

-- Nick Jensen was the only Capital not to record a shot on goal.

-- The Caps fell to 14-17 all-time in home playoff overtime games.  They are now 1-8 in multiple overtime games on home ice, their lone win coming in Game 2 of the 1985 Patrick Division semifinal against the New York Islanders (2-1).

-- Braden Holtby finished the postseason with a 2.67 goals against average.  That is his highest GAA in any of his seven postseason trips.

You play an entire 82-game, six-month season, and certain things are made known, good and bad.  The Caps had two issues this season that were consistently frustrating.  They were a team that did not finish games well, compared to the rest of the league, and they were a lousy faceoff team.  Both came back to bite them in the end.  They took a lead into the third period, and they coughed it up less than three minutes in.  So, overtime.  Then, in the second overtime, they lost a defensive zone draw and never got the puck out of their own end before Carolina scored the game-winning goal.  Doing the same things the same way and expecting a happy result in this instance might have been insanity.

There will always be that happy time in early June 2018 when the Caps became champions and celebrated like no other team, as a team and with their fans.  Nothing ever takes that away.  And while there will be the usual soul-searching and evaluation of this team, that is for another time.  We are sad that it came to an end all too soon, but these Capitals defended their title honorably.  Champions are always champions, even when the title moves on to another city.
Posted by The Peerless at 12:34 AM 1 comment: