“True happiness is... to enjoy the present, without anxious dependence upon the future.”
-- Lucius Annaeus Seneca

There are few players who seem to have more fun being a hockey player than Nate Schmidt.  As it was once eloquently, if graphically put (on "The Tonight Show," of all places), he was “most likely to puke rainbows when he opens his mouth.” 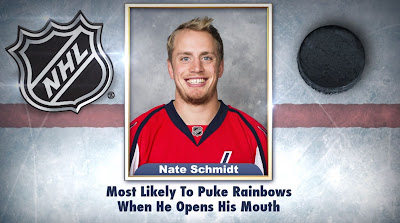 That attitude should not obscure the fact that Schmidt had a career year in 2016-2017 with the Caps, despite missing 22 games.  He scored a career high three goals, tied a career high with 14 assists, recorded a career high 17 points, was a career-best plus-22, and posted a career-high 5.0 shooting percentage.

More than any player, though, his ice time suffered with the acquisition of Kevin Shattenkirk at the trading deadline.  Starting with Shattenkirk’s first game with the Caps on February 28th, Schmidt was in the lineup only seven times in the last 21 games of the season.  Even with the limited duty, Schmidt managed to finish the season with a measure of consistency, recording points in each of his eight ten-game segments and failing to get an assist only in his seventh such segment.  He was an even or better player in each of his last seven segments and was plus-6 in his last four games of the season.

Schmidt’s possession numbers had an odd quality to them.  His individual Corsi-for at 5-on-5 was a respectable 53.5 percent (numbers from stats.hockeyanalysis.com), but it dissolved to a point when comparing him among teammates.  He had a good possession chemistry with Brooks Orpik, with whom he spent most of his 5-on-5 ice time.  Together, they had a 56.3 percent Corsi-for at fives, but when apart, both dropped by more than seven points.  It turned out that Schmidt was worse with every other defenseman with whom he was paired than he was when apart from them. 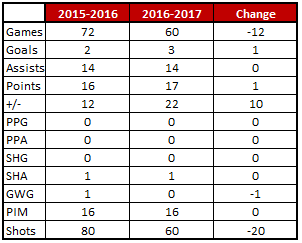 Cheerless’ Take… Yeah, it’s nice that the Caps did well when he had a point, but more Nate was not necessarily better.  The Caps were 12-10-1 in games in which he skated more than 16 minutes, 6-1-1 when he skated fewer than 13 minutes.

Odd Schmidt Fact… No player for the Caps had more games of plus-3 or better in 2016-2017 than Nate Schmidt.  He had six such games.  In fact, no defenseman has had more such games in a season for the Caps since Sylvain Cote in 1993-1994 (eight games).

When the Columbus Blue Jackets came to Washington for a January 5th contest, they were riding a 16-game winning streak, the second-longest in NHL history, and were looking to tie the 1992-1993 Pittsburgh Penguins for the longest winning streak in league history.  It was the Caps who came out strong to start the game, though, getting goals from Daniel Winnik (with an assist from Schmidt) and John Carlson in the first period to take a 2-0 lead.  Any thoughts the Blue Jackets had of changing the momentum were put to rest seven minutes into the second period when Schmidt took a feed from Alex Ovechkin and fired a shot on goalie Sergei Bobrovsky that was stopped.  He followed up his own shot, though, and his second chance shot got through Bobrovsky to make it a 3-0 lead.  It was the dagger in the heart of the Blue Jackets’ winning streak and for Schmidt one of three two-point games in his season.

The Caps lost their first game of their season series against the New York Rangers in October at Verizon Center and didn’t get a chance to even the series until February, when they visited Madison Square Garden.  It was a goalies sort of contest from the start.  Philipp Grubauer got the start and stopped 18 of 19 shots in the first period, while Henrik Lundqvist was his usual stingy self against the Caps.  Alex Ovechkin did manage to solve Lundqvist for a power play goal in the second period, leaving the teams tied going into the third.  One slip could be the difference in this game.  Unfortunately for Schmidt and the Caps, it came with less than nine minutes left off a faceoff in the Caps’ end to the right of Grubauer.  Jay Beagle won the draw from Mika Zibanejad, but Chris Kreider got inside position on Schmidt and beat him to the puck.  Kreider found Mats Zuccarello in the slot for a shot that slipped between Grubauer’s pads for the game-winning goal.  Schmidt skated one more shift after that and finished with two shot attempts (both blocked), a hit, and a takeaway in 14 minutes and change for the afternoon…and that minus-1.

When one considers that this was Schmidt’s second career postseason and the performance of his cohorts, he did pretty well.  He tied for second in points among Caps defensemen (1-3-4) despite missing two games in the opening round against Toronto.  He was a team-best plus-6 among all Capital skaters, and he was the only defenseman for the Caps to finish in plus territory in the second round against Pittsburgh (plus-1).  What might be the odd part of his postseason was that it was an image in negative from his regular season in terms of ice time and team success.  The Caps were 5-2 in games in which he skated more than 16:30, 1-3 in games in which he skated less.  It might be worth noting that his two lowest ice times were in Games 6 and 7 against the Penguins (11:20 and 13:10, respectively).

Nate Schmidt is still climbing that developmental ladder that took him from being an undrafted graduate of the program at the University of Minnesota to signing with the Caps as a free agent to parts of two seasons with the Hershey Bears to all or part of four seasons with the Caps.  He still has only 200 games of regular season and 21 postseason games of experience.  But the next rung on that developmental ladder might be in steel gray and gold instead of red, white, and blue.  Schmidt might be property of the Vegas Golden Knights by the time you read this sentence, his name being prominently mentioned as a potential selection by the Golden Knights in the expansion draft.  It would be unfortunate, given that the Caps are thin on defense with the likely departures of Karl Alzner and Kevin Shattenkirk to free agency and the untested (at the NHL level) quality of defensemen in Hershey such as Madison Bowey or Christian Djoos.  But however anxious Caps fans might be about Schnidt’s future, he’s been a lot of fun to watch.