The Peerless Prognosticator is ON THE AIR!!! -- Game 73: Kings at Capitals, March 25th

The phrase, “no rest for the wicked,” comes from the Book of Isaiah. The NHL’s version of this is “no rest for the playoff hungry.” And so it is for the Washington Capitals who, despite having won five of six standings points on their trip to California last week, come home to face two stout opponents this week in their hunt for a spot in this year’s Stanley Cup playoffs.  No rest indeed.

First up for the Caps is the Los Angeles Kings, a team that denied the Caps a sweep in California by winning in a trick shot competition, 2-1, at Staples Center last Thursday. The Kings are coming to Washington from just up I-95, where they battled the Philadelphia Flyers on Monday night. That makes it two games for Los Angeles since they played the Caps, so not much has changed from when we took a look at them in some depth for last week’s game in southern California.  Nevertheless, here is how the two teams compare going into Monday night's games: 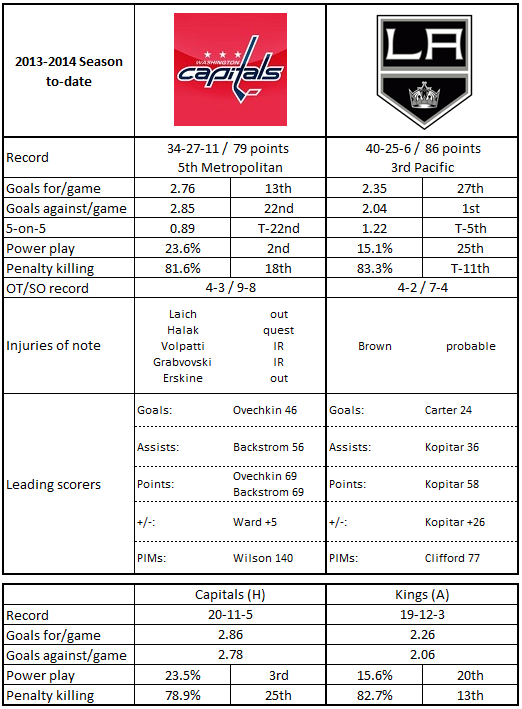 1. When Jonathan Quick shutout the Florida Panthers, 4-0, on Saturday it was his fifth shutout of the season. That placed him in a tie for second behind Boston’s Tuukka Rask, who has six. It was his 30th career shutout in 327 appearances. He is one of only 23 goalies in NHL history to record 30 or more shutouts in his first seven seasons. In each of his last eight blankings he faced fewer than 30 shots on goal. The shutout also left Quick alone at the top of the win column in Kings’ history with 172, passing Rogie Vachon for the top spot.

2. The four goals that the Kings scored against the Panthers was the first time they scored as many as four goals at home since January 9th in a 4-2 win over Boston, a span of 14 games.

4. On the other hand, no team has allowed fewer goals (70) nor averaged fewer allowed on the road (2.06) than the Kings.

5. Going into Monday’s game in Philadelphia the Kings had ten straight games with Corsi-for and Fenwick-for percentages at 5-on-5 over 50 percent. The longest such streak with both measures over 50 percent for the Caps this season: four games, accomplished twice.

1. The Capitals are one of three teams – Calgary and Florida being the others – to have four goalies play more than 400 minutes this season: Braden Holtby, Philipp Grubauer, Jaroslov Halak, and Michal Neuvirth.

2. Evgeny Kuznetsov is already among the top 35 rookie forwards in assists (five). Doubt he will catch Colorado’s Nathan MacKinnon (31) for the top spot.

3. Ten rookie skaters have dressed for the Caps this season, and eight of them have points. Only Nicolas Deschamps and Cameron Schilling did not register a point in their brief stints with the big club.

4. If Philipp Grubauer does not get another minute with the Caps this season (and frankly, if he does, a figurative meteor will have struck this team) he will have fared well in his rookie season. Among rookie goalies appearing in at least 10 games, Grubauer is second in save percentage (.925) to Los Angeles’ Martin Jones (.932).

5. So far this season, 11 Capitals have skated 500 or more minutes in 5-on-5 close score situations. Who leads the team in Corsi-for relative percentage (their percentage relative to team percentage when they are not on the ice)? Dmitry Orlov (+9.4) and Mike Green (+7.4). Go figure.

Seven times in his nine-year career Mike Richards appeared in 70 or more games. The only season among them in which he did not reach the 40-point mark was his rookie season in 2005-2006 when he was 11-23-34 in 79 games for the Flyers. He hit the 40-point mark on Saturday against Florida when he scored late in the first period of a 4-0 win. It is, however, his only point in his last seven contests. He is just 3-2-5 over his last 20 games. This also happens to be his worst shooting season (7.0 percent) since his rookie campaign (6.5 percent). He does not play as prominent a role with Los Angeles as he once did for Philadelphia, but with almost 650 games in his resume, and recognizing that he plays hard, spirited minutes, one starts to wonder if things aren’t beginning to take their toll, at least on his offensive game, even though he is just 29 years old.

Something strange happened in the second period of the Capitals’ game against the Toronto Maple Leafs on March 16th. It started when Dion Phaneuf scored for Toronto 8:05 into the period to bring the Leafs to within 3-2 of the Caps. Jay Beagle found himself on the ice on the next shift, but came off when Jack Hillen took a penalty 27 seconds after the Phaneuf goal. Then, having seen that penalty killed off, Beagle went off himself on a penalty a minute after the Hillen penalty expired. The Caps killed that penalty, too, but on Beagle’s next shift he, who started the game centering a line with Dustin Penner and Tom Wilson, had new linemates – Alex Ovechkin and Marcus Johansson – 15:33 into the second period.

Except for power plays, that Beagle-Ovechkin-Johansson line would remain intact for the remainder of the game against Toronto, then be left intact almost for the entirety of the Caps’ road trip to California. For Beagle it has no doubt been exciting, but not for his numbers. Consider that over a five-game period ending with that game against Toronto, Beagle had a cumulative Corsi-for percentage at 5-on-5 of 61.2, while in his three full games centering Ovechkin that number dipped to 40.9. Sure, there are factors to consider such as meshing with an infrequent linemate, facing superior opponents bent on defending Ovechkin, etc. But is this experiment in matching such different players working? One could say that “results matter,” and at this time of year that is as important as it gets. But was the Caps 2-0-1 run through the Golden State a product of anything Ovechkin or Beagle did as linemates, either at the offensive or defensive ends? The answer to that question should probably be answered by wiser hockey minds than ours, but the fact that this line does not have an even strength point in three games, added to the optics and the underlying numbers, suggest that it has not been the case.

1. Move the Puck. If the Caps stand around on this team, they are going to be run over. Make the Kings move their feet, make them move, period. That will be especially important against a team playing its second game in two nights and third in four nights, the last two of them three times zones from home.

2. Quicker Picker-Upper. Going into the land of giants is a tough chore on this team, but if the Caps are to be successful, it might not be on first shots taken. They need to follow things up from in close and pick up loose pucks, whether it is in front of Jonathan Quick or Martin Jones.

3. No peeking. It is scoreboard watching time, and one might expect the occasional peek at the out of town scoreboard. This is a team that has focus issues without even adding that nonsense. Eyes front, boys. Focus on the ice.

The Caps have five home games remaining starting with this contest against the Kings. None of them can be considered easy, especially with the last three Stanley Cup winning franchises coming to visit, including the Kings. If the Caps are going to make it to the post-season, they are going to earn it. The price of lackadaisical play over their first 72 games, there is little margin for error now, and no mercy to be found from those who come to visit.