The Peerless Prognosticator is ON THE AIR!!! -- Game 57: Devils at Capitals, February 20th

The Washington Capitals have had a good run of late, winning seven of their last eight games.  They get a chance to make it eight wins in nine contests on Saturday evening when they host the New Jersey Devils at Verizon Center.

The Capitals have not been what one would consider dominant over those eight games, what with five of them settled by a single goal, two of them in overtime (“3-2” seems to be the preferred score these days, the final score in four of the wins).

On the other hand, the Devils come into this game having gone 3-2-0 since they dropped a 3-2 Gimmick decision to the Caps at Verizon Center on February 6th.  Four of those games were settled by a single goal, the Devils winning three of them (one in overtime), before dropping a 6-3 decision to the Philadelphia Flyers on Tuesday.

Among the individual scorers since last facing the Caps, Adam Henrique is tied for the lead in goals (two, with Joseph Blandisi), and he leads the team in total points (four).  On a team starved for offense (last in the league in scoring offense), he has been one of the few reliable contributors. Since the beginning of the new calendar year, Henrique is 6-6-12 in 20 games.  He among the more accurate shooters in the league, scoring 19 goals on 18.1 percent accuracy.  That ranks tenth among players averaging at least 10 minutes per game and appearing in at least 30 games.  Henrique is 4-4-8, minus-9, in 16 career games against the Caps.

Kyle Palmieri leads the Devils in goal scoring (21), but until he scored against the Flyers last Tuesday he had gone nine games without a marker. It was a case of things just drying up. Palmieri was 0-for-26 over those nine-plus games before he struck late in the third period against Philadelphia. However, he has already established a career best in goals, surpassing the 14 goals he recorded in each of the past two seasons with the Anaheim Ducks.  He also has a career high in total points (37), six better than the 31 he had in the 2013-2014 season with Anaheim.  In five career games against the Caps, Palmieri is 0-1-1, minus-1. 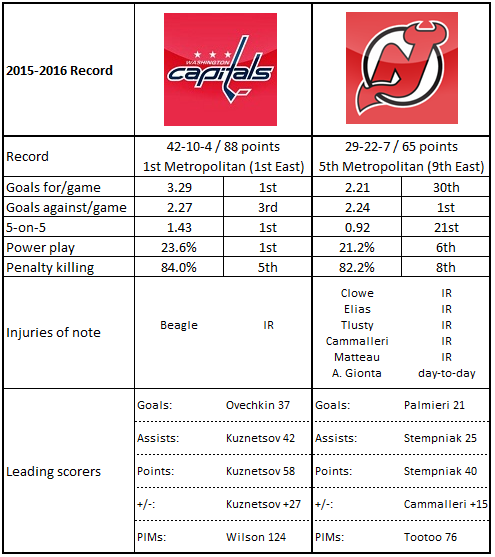 2.  The Devils do not have a goal from a defenseman in their last seven games.  Not since David Schlemko scored a power play goal (the game-winner) in the third period in a 3-2 win over the Rangers on February 2nd.

4.  The Devils are fine at both ends of the game in terms of goal differential, a plus-3 in the first period and a plus-1 in the third.  But those second periods.  Their minus-12 goal differential is tied for fifth-worst in the league with the Toronto Maple Leafs.

3.  Despite the heavy goal totals from Ovechkin, the Caps do have goals from nine different players in their last six games.  They also have points from 15 different skaters, five of them five or more points.

5.  Washington is not exactly lighting the world on fire with their possession numbers, either.  Since facing the Devils back on February 6th, their Corsi-for at 5-on-5 overall is 48.5 percent (numbers from war-on-ice.com)

The flip side of having a goaltender get as many minutes as Cory Schneider does for the Devils means that the backup spend a lot of time on the bench modeling headwear.  There have been 84 goalies to dress in the NHL this season.  Of that number, New Jersey backup goaltender Keith Kincaid ranks 62nd in total minutes played, and the 22 goalies behind him include a lot of netminders who might have been called up from the minors for a game or two.  The lack of playing time hardly makes Kinkaid a bad goaltender.  Quite the contrary.  In 31 career games he has a respectable .916 save percentage.  This year he is 4-5-1, 2.28, .918 in 11 appearances, including a 28-save, 1-0 shutout of the Los Angeles Kings in his last appearance on Valentine’s Day.  With the Devils playing back-to-back games this weekend, starting with the New York Islanders on Friday night (Schneider is expected to get the call against the Islanders), the Caps might get a look at Kinkaid.  He is 0-0-2, 2.24, .921 in three career appearances against the Capitals.

Last year, Marcus Johansson set career bests in goals (20) and points (47).  With 25 games to go in this season he is on a pace to do even better in goals (21) and points (52).  His plus-14 has already demolished he previous career best (plus-6 last season), he has more game winning goals this season (7) than his last three seasons combined (6), his shooting percentage is his best ever (16.1), and while  he is still a work in progress as a faceoff man, his 48.4 percent is, yes, another career high.  Since missing four games earlier this month to injury, Johansson is 1-3-4, plus-2, in five games.  If there is one thing missing from his offensive game it is reflected in a return to old habits – a reluctance to shoot.  He has just 10 shots on goal in his last ten games.  Johansson is 3-3-6, minus-1, in 19 career games against New Jersey.

The Devils have a good record in the second half of back-to-back sets of games, 4-1-2 so far this season.  That one loss in regulation came to the Caps on October 10th, a 5-3 loss in the Devils’ second game of the season.  On the other hand, the Caps are in a good schedule rhythm at the moment, not having had back-to-back games on their record since January 16-17.  This is the first game of a four-game home stand for the Caps and an opportunity to take advantage of teams that have had their issues at one time or another this season – New Jersey, Arizona, Montreal, and Minnesota.  But you can only play the team that is next on the schedule, and the Devils will be their usual annoyingly devoted to their system selves.  It might make for an ugly game, but then again, all wins are beautiful in their own way. 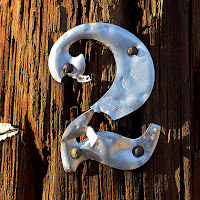 It took extra time on Thursday night, but the Washington Capitals made sure their trip to Brooklyn was a happy one as the Caps squeezed past the New York Islanders, 3-2. It was the Caps’ third win in three tries against the Islanders this season.

It was a game that did not start out in a promising way for the Caps, who surrendered the first goal late in the first period. John Tavares got the Islanders on the board when he took a pass from Nick Leddy just inside the Caps’ blue line, circled through the right wing faceoff circle, and wrong-footed a wrist shot past goalie Braden Holtby at the 15:41 mark.

It was part of an early game funk for the Caps that resulted in head coach Barry Trotz making some adjustments among forward lines. It had the intended effect less than two minutes into the second period. It started with Justin Williams and Leddy fighting for the puck in the corner to the left of goalie Thomas Greiss. Williams fought Leddy to a draw, allowing Evgeny Kuznetsov to swoop in and gather up the puck. Circling behind the Islander net, Kuznetsov spun and sent a pass back out to the left of Greiss where Alex Ovechkin was waiting. Ovechkin wasted no time snapping the puck into the net, and the game was tied 1:25 into the period.

Less than two minutes later, the Caps scored a more conventional power play goal. With the top line reunited, T.J. Oshie held the puck just inside the blue line as Nicklas Backstrom filled in down the middle. Oshie led Backstrom perfectly with a pass, and Backstrom slid the puck off to his left where Ovechkin was gliding in. Ovechkin took one step to his right and fired a laser past Greiss to make it 2-1 just 2:52 into the period.

The one-goal lead held up through the rest of the second period, and when the Caps worked through the first 18 minutes of the third period without damage, it looked as if they would get out with their one-goal lead intact. However, a cross-ice clearing attempt by Marcus Johansson did not have enough energy and was settled by Travis Hamonic at the right point. Hamomic fired the puck at the Washington net. Holtby made the stop, but the puck squirted out to Frans Nielsen to Holtby’s left. With time to pick his spot, Nielsen snapped the puck over Holtby’s left shoulder and into the top of the net to tie the game, 2-2, with just 1:44 left in regulation.

That would be how the teams went to overtime, and it looked as if the five-minute session would not be sufficient to settle matters. In the final minute, with the open ice allowed by the 3-on-3, John Carlson drew the puck to the right point, crossing paths with Justin Williams as he did. Carlson then fed Williams high in the offensive zone, and Williams blistered a one-timer that sailed through a screen and past Greiss for the game-winner in the Caps’ 3-2 win.

-- The win was the Caps’ 21st on the road, matching their home win total. Only the Chicago Blackhawks have more home wins (22) than the Caps’ have road wins this season.

-- Alex Ovechkin recorded ten shots on goal.  That makes three games in his last four in which he hit the ten-shot mark. No other player in the NHL has more than two such games all season (Evgeni Malkin has two).  He has more shots on goal in his last four games (35) than 297 skaters to have dressed for games this season.

-- Justin Williams had a goal and an assist to extend his points streak to three games and four in his last five.  Over those five games he is 3-3-6, plus-3.

-- Ovechkin’s two goals gave him six multi-goal games this season, putting him in a tie with Tyler Seguin for most in the league.

-- You have to work hard at making a play look as easy as Nicklas Backstrom’s assist on Ovechkin’s second goal.  And no player in the league builds as solid a resume in as understated a fashion.  With that assist, Backstrom has points in nine of his last 12 games, over which he is 4-9-13, plus-2.

-- The trapezoid behind the opponent’s net is always going to be known as “Wayne Gretzky’s Office,” but Evgeny Kuznetsov seems to want to start a franchise of his own.  The back pass from behind the net to the uncovered weak side has become something of a signature move for Kuznetsov, who recorded a point for the 12th time in 15 games and his third game in a row.  He is 3-18-21, plus-8, over his last 15 games.

-- Braden Holtby might want the John Tavares goal back, but he looked sharper than he did in any game since he stopped 33 of 35 shots against the Philadelphia Flyers in a 3-2 win back on February 7th.

If there is one place the Caps have struggled a bit this season, it has been in the 3-on-3 overtime.  In games settled during the five-minute session, this win lifted their record to 4-3 (they are also 3-1 in the Gimmick).  This win was gratifying in one important sense.  At this time of the season – the “dog days of February,” if you will – and against an opponent that the Caps had already beaten twice, this might have been a game in which focus was flagging.  Early on, that looked to be the case.  But Barry Trotz took swift action to shake things up among his lethargic forwards, the players shook off the fog, and they tended to business.  Again.  It is a trait this team just keeps demonstrating.