The Peerless Prognosticator is ON THE AIR!!! -- Game 30: Red Wings at Capitals, December 11th

The Washington Capitals return to Capital One Arena after a successful road trip to host the Detroit Red Wings on Tuesday night.  The Caps went 2-1-0 on their just completed three-game road swing to improve their road record to 9-5-1.  Washington will be looking for their ninth win on home ice this season when they take on Detroit.

As for the Red Wings, they would have to qualify as one of the league’s surprise teams, despite resting in sixth place in the Atlantic Division.  Their 13-13-4 record does not diminish their improvement much (but we will get to that).  After starting the season with a ghastly 1-7-2 record after ten games, Detroit is 12-6-2 in their last 20 games and 6-2-0 in their last eight road games after opening the season with five road losses (0-4-1).

The Red Wings are a team well-removed from the glory days of 25 straight playoff appearances and four Stanley Cups.  Pavel Datsyuk, Henrik Zetterberg, and Nicklas Lidstrom are gone.  The new generation of Red Wings centers, in a manner of speaking, on youngsters such as Dylan Larkin.  The 15th overall pick of the 2014 entry draft is now in his fourth season with Detroit and has become the player the club leans on most heavily for offensive production.  His 11 goals is tied for the team lead, while his 28 points lead all Red Wing skaters.  Those numbers put the young center roughly on a pace toward last season’s 16-47-63 in 82 games.  He has been hot of late, posting three straight two-point games (1-5-6 overall) going into Monday night’s contest with Los Angeles.  He has been a consistent contributor this season so far, not going more than two games without a point through 30 games played.  Those 30 games point to his durability, Larkin having missed only four games in three-plus seasons.  In 10 career games against Washington, Larkin is 1-4-5, plus-2.

Another of the young guard in whom Detroit is putting a measure of trust is forward Andreas Athanasiou.  The 24-year old was signed to a two-year contract extension last July that will pay him a total of $6 million and allowed the parties to avoid arbitration.  He, like Larkin, is in his fourth season with the club and is tied with Larkin for the team lead in goals (11) through Sunday.  With seven assists to go with his goal total, Athanasiou seems to be a good bet to eclipse his career-high of 33 points set last season.  The odd part of his contributions so far are their relationship to wins, or the lack of them.  Athanasiou has goals in nine games this season, but the Red Wings are only 5-4-0 in those games (5-8-4 when he did not record a goal).  Detroit is only 6-5-1 when he recorded a point, 4-7-3 when he did not.  The Wings are 3-1-0 in the four games he missed earlier this season.  He is 4-1-5, minus-1, in seven career games against the Caps.

The youngest defenseman on the roster is one for whom big things might be expected.  In what was a defense-heavy top of the 2016 draft, Dennis Cholowski was the eighth blueliner picked, that with the 20th overall pick by Detroit.  It took him a few years to reach the big time, but he broke through this season, and he is making his presence felt.  His four goals ranks third among all rookie defensemen, and he is tied for third among rookie defensemen in points (12).  No rookie defenseman has more power play points than Cholowski through Sunday (seven), and he is one of only six rookie defensemen with a game-winning goal.  As is the case with many rookies, though, even very good ones, there are slumps and pauses.  Going into Monday’s game against Los Angeles, Cholowski carries his longest streak without a point this season – six games – and his minutes have been pared back, to an average of 16:40 over those six games after averaging 19:38 over his first 22 games.  He went without a point in the Red Wings’ 3-1 loss to the Caps on November 23rd, his only career appearance against Washington. 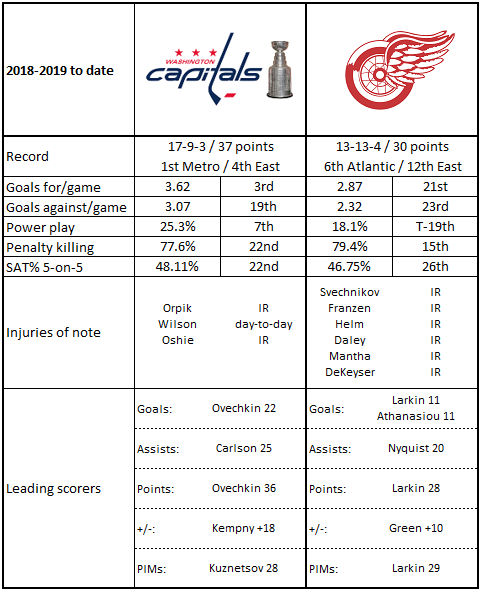 1.  About that improvement over their poor start.  After going 1-7-2 to start the season, Detroit went 9-2-0 in their next 11 games.  However, starting with their 3-1 loss to the Caps on November 23rd, Detroit is 3-4-2 going into Monday nights’ game against the Los Angeles Kings.

2.  Gustav Nyquist leads the Red Wings for December in quite a few categories: goals (four, with Frans Nielsen), assists (five, with Larkin), points (nine), and plus/minus (plus-5).

4.  Nobody blows out Detroit.  Well, almost nobody.  The Red Wings have lost only two games this season by three or more goals, fewest such losses in the league (tied with Calgary), and they came in consecutive games back in October, an 8-2 loss in Boston to the Bruins and a 7-3 loss in Montreal against the Canadiens.

5.  Since those back-to-back losses allowing a total of 15 goals, Detroit has allowed more than three goals in regulation four times in 24 games and only one of those games on the road (a 5-4 overtime win over Toronto last Thursday).

1.  The Caps are running well behind last season in one respect.  They have five wins by one goal so far this season, on a pace for 14 such wins.  They had 20 one-goal wins last season.

3.  The Caps are the most efficient shooters in the league with a 12.2 shooting percentage as a team.

4.  Only Tampa Bay has more 5-on-3 goals this season (four) than the Caps (three, tied with Florida and Boston).

5.  Washington has more 5-on-6 goals scored (seven) than any team in the East except Philadelphia (eight).

On a team in which four rookie defensemen have dressed this season, Mike Green is now a mentor more than the Young Gun he was with the Capitals.  He is one of four defensemen with the club age 33 or older (he is 33) who will, among their other duties, be asked to shepherd the likes of Dennis Cholowski and, to a lesser extent perhaps (owing to their limited number of games played), Filip Hronek, Joe Hicketts, and Libor Sulak.  Not that Green is merely a graybeard imparting advice.  Of 165 defensemen to have dressed for at least 20 games through Sunday, Green ranked tenth in points per game played (0.76 on 16 points in 21 games).  It is his best points per game since he recorded 76 points in 75 games (1.01 per game) with Washington in 2009-2010, the latter of two consecutive seasons in which he was a Norris Trophy finalist.  Not bad for a player who missed the last nine games last season to a neck injury and the first nine games this season to illness.  And beware when Green does record a point.  Detroit is 9-2-1 in the 12 games in which he had at least one, 3-5-1 in the nine games in which he was held without a point.  Green is still looking for his first goal against his old club; he has one assist and is minus-7 in eight games against the Caps.

After a sluggish start to the season, Dmitry Orlov is starting to put things together in the offensive end of the ice.  He was 0-2-2, minus-8, over his first 16 games despite getting almost 23 minutes in ice time per night.  He broke out of his slump in a big way with two goals and an assist against the Minnesota Wild on November 13th.  Starting with that game, Orlov is 2-7-9, plus-4, over his last 13 games with a bit less ice time (22:29 per game).  He still has some climbing to do, though; his minus-4 is still worst among defensemen.  Even there, improvement is evident.  Orlov was a “minus” player in nine of his first 16 games, but he has been one only four times in his last 13 games.  What he might not yet be, though, is a dependable minutes eater.  The Caps are 1-3-1 in games in which Orlov skated more than 24 minutes this season, 16-6-2 in games in which he skated 24 minutes or less.  Orlov is 1-2-3, plus-1, in 12 career games against Detroit.

It would be way too easy to take the Red Wings lightly.  They won only 63 games over the past two seasons; this is a team that once won 62 games in a single season not all that long ago (ok, 1995-1996).  The last time they won fewer games in consecutive seasons was 1989-1990/1990-1991 when they won 62 games, and a young left winger scored 46 goals over the two seasons – Gerard Gallant, now the coach of the Vegas Golden Knights.  Detroit can score; they have four or more goals in five of their last seven games.  Their problem recently has been keeping pucks out of the net (3.86 per game over their last seven games).  It could make for something of a shootout at Capital One on Tuesday.