For the Washington Capitals, Week 2 opened with a shaky effort on home ice, got more unsteady on the road, but closed on a hopeful note in a difficult place.  When all was said and done, the Caps had one of every decision – a win, a loss, and an extra time loss.  Here is how it happened. 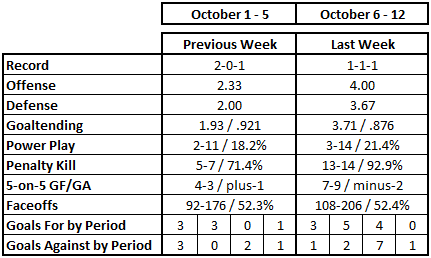 If you are looking for a silver lining in this week, it might be that the results were better than expected.  Last season, the Caps went 0-2-2 in four games against the Dallas Stars and Nashville Predators, two overtime losses against the Stars and two games against the Predators that made one think of the saber-toothed tiger of the Predator logo feasting on docile prey, outscoring the Caps 13-5 in their two games.  The 4-1 win in Dallas over the Stars to close the week was especially encouraging.  Washington had not won a game in regulation in Dallas since October 17, 1995.  How long ago was that?  There are 165 players to have dressed so far this season in the NHL who were not yet born on that date.

It would be hard to find much fault with the offense in Week 2.  The scoring was balanced – seven different Caps among 19 skaters to dress had goals in the three games, 14 had points, 16 recorded at least one shot on goal.  Even more impressive, the Caps did it against teams that finished second (Dallas Stars) and fourth (Nashville Predators) in scoring defense last season.  Want even more impressive?  When the Caps scored four goals in Dallas against the Stars, it was the first time in 15 home games, dating back to last February 19th, that the Stars allowed more than three goals on home ice.  And, the team was efficient, scoring 12 goals on 83 shots overall (14.5 percent).

On an individual level, Alex Ovechkin led the team with three goals in the three games, bringing his total to four for the season (tied for sixth in the league) and his career total to 662, six short of Luc Robitaille for 12th place all time.  John Carlson led the team for the week in assists (five) and points (seven), and was a team-best plus-3.  His ten points for the season were tied for third in the league at week’s end and led all defensemen.  He also had the Caps’ only game-winning goal for the week, becoming the tenth defenseman in the league to record at least one this season.

Three other Caps tied for second behind Carlson in overall scoring with four points apiece – Nicklas Backstrom, Tom Wilson, and Ovechkin.  In his first week back after opening the season on a three-game suspension, Evgeny Kuznetsov went 2-1-3.

The defense was decent-bad-good over the three games, from beginning to end of the week.  They held Dallas to 26 shots on goal to open the week in Washington and to 25 shots on goal in Dallas to close the week.  In between was another matter.  Nashville jumped on the Caps for 13 first period shots to set a tone, and the 16 shots on goal they posted in the third period was indicative of the dominance that earned them a 4-1 win of the period on their way to a come-from-behind 6-5 win.  They had 38 shots on goal for the game.

A glass half full/glass half empty week in net for the Caps.  The half empty part is the part that had better fill up soon.  Braden Holtby got the nod in the first two games of the week, and even if you subscribe to the notion (with which we concur) that no goaltender’s numbers, good or bad, are entirely a product of his play, Holtby had a disappointing week.  In the two games he stopped only 54 of 64 shots overall (a .844 save percentage) and was 36 for 45 in saves on even strength shots (.833), fourth-worst among 56 goalies to dress in Week 2 across the league.  October has never really been Holtby’s month to shine.  He has a fine 26-17-5 win-loss record over his career of Octobers, but his 2.71 goals against, .908 save percentage, and seven shorthanded goals allowed (most of any month) have not been impressive.  But those numbers look better than his numbers so far this season.  But, it’s early.

It’s early in Ilya Samsonov’s career, too.  And a fine start it has had.  Samsonov got the call for the game in Dallas to end the week, and he was impressive in his second career start in a place that has been unkind to the Caps.  He allowed a single goal, becoming the first Capital ever to allow less than two goals in a complete game in Dallas since the Stars moved there in 1993.  He became the first rookie Capital goalie to win his first two starts since Michal Neuvirth did it in 2009 (Holtby won his first two appearances, but the first was in a relief role).

Better than Week 1, but not where it might be with this skill level.  Still, the power play did show signs of health as the week wore on.  The Caps were 0-for-5 against Dallas to start the week, a streak of futility that reached six when they failed on their first power play chance against Nashville.  However, the Capitals scored on two of their next three man advantage opportunities against the Predators in the 6-5 loss, the one on which they failed being an abbreviated 17 second chance to end the game.  After going 1-for-5 against the Stars on Saturday, the Caps closed the week 3-for-8 after starting it 0-for-6.

The Caps still have some work to do in applying pressure, insofar as it means getting pucks to the net.  The Caps managed 17 shots on goal with a man advantage in 17:22 of power play ice time.

Another glass-half-full/glass-half-empty week.  Yes, the Caps were very effective in killing penalties, their 13-for-14 week allowing them to jump into the top ten in penalty killing.  The 92.9 percent kill rate was better than any of the 14 weeks last season in which the Caps faced ten or more shorthanded situations.

On the other hand, there were those 14 shorthanded situations in three games.  It was the third-most faced by any team in Week 2, and both teams ahead of them – Dallas (20) and Carolina (18) played four games.  Compare that to the seven shorthanded situations the Caps faced in Week 1, and one gets the feeling the Caps might have lost another standings point (or two) had their penalty killing been less effective.

What the Caps did very well in Week 3 was suppress power play shots on goal against.  In 25:10 of shorthanded ice time, the Caps allowed their three opponents a total of 13 shots on goal.

Week 2 was almost identical to Week 1 in the circle, the Caps following the 52.3 percent week with a 52.4 percent week.  It was a somewhat high-volume week, given that three games were played, and the opportunities were spread around rather liberally.  Twelve Caps took at least one draw, and six took more than ten.  Nic Dowd had the best week among the ten-plus group, winning more than 64 percent of his faceoffs.  Nicklas Backstrom was the only member of that group to finish under 50 percent.

The individual performances led to fine overall efforts in the ends.  Washington was over 55 percent in both the offensive and defensive ends, more than offsetting an under 45 percent performance in the neutral zone for the week.

It sticks out like a sore thumb – third period goals allowed.  Seven in three games.  At least one goal allowed in the third period in all three games.  Those third period collapses in the first two games of the week cost the Caps three standings points, the extra point they would have earned against Dallas to start the week and two points outright in the four-goals-against collapse against Nashville in the middle game of the week.  As a result, the Caps have not allowed the most third period goals (they are tied for third most allowed), but when coupled with overtime goals allowed, no team has allowed more goals after 40 minutes than the Caps (11 in the third period and overtime, tied with Los Angeles). 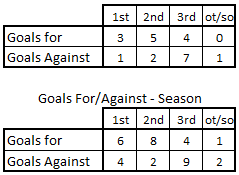 The record is not much different, but how the Caps are getting there this season bears little resemblance to last year through two weeks.  Goals scored and allowed are down, not really a surprise, even this early, given the alterations in personnel among the bottom six from more offensively oriented players to more two-way players.  Shots and shot attempts have changed rather radically, and for the better in both categories.  The power play is off, and the penalty kill is better, leaving the total special teams index both last year and this well into the positive territory (111.8 last season, 109.7 this season).

Grittership categories look off so far this season, but the hits, blocked shots, and takeaways drop offs could very well be the result of better team defense that limits opponents’ possession opportunities. 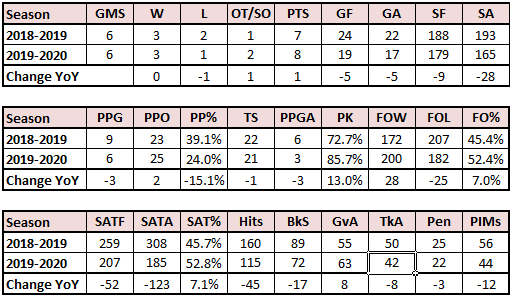 That the Caps got a win in Dallas, a place where they had only one other regulation win in their history there, was a good way to end the week.  But two blown third period leads, especially the four-goals allowed collapse in Nashville, were opportunities squandered.  This is a team that is integrating quite a few new parts, either added late last season or over the summer, that effect both the forward and defensive groups.  And perhaps those getting to know you pains have opened up holes that Braden Holtby has been unable to close frequently enough.  How the Caps improve on that will be something to watch in Week 3 when the Caps take on teams of a more run-and-gun bent.

Posted by The Peerless at 2:34 PM No comments: