The Peerless Prognosticator is ON THE AIR!!! -- Game 26: Ducks at Capitals, December 2nd

The Washington Capitals wrap up their short two-game home stand on Sunday afternoon against the Anaheim Ducks with a chance to extend their current winning streak to eight games, their longest since a nine-game streak from December 31, 2016 through January 15, 2017.  Over this seven-game winning streak to date, the Caps have outscored opponents by a 30-16 margin.

The Caps will be hosting a team on a bit of a roll of its own.  Anaheim has won five of its last six contests, falling only to the Predators in Nashville last Sunday.  In those six games the Ducks outscored their opponents, 16-13, four of the wins coming by one goal, two of them in overtime.

Nick Ritchie is a surprise as the leading goal scorer for the Ducks in their 5-1-0 run.  His four goals doubles that of any other skater, four of whom have a pair.  Ritchie has not given any persistent signs to date that he will grow into a reliably productive goal scorer. In two full seasons coming into this year, Ritchie totaled 24 goals in 153 games.  The four he has in this recent run are his only four of the season to date.  He has dressed for only 13 games so far this season, missing nine games to start the season due to visa issues, and missing another six games to an upper body injury before returning to the lineup on November 9th.  He comes into this game with points in six of his last eight games (4-4-8).  Ritchie is 2-0-2, plus-1, in five career games against the Caps.

As the calendar flipped to December, no team played more games than the Ducks (28).  Only one defenseman appeared in all of them – Brandon Montour.  Montour, in his second full season and third overall with Anaheim, leads all Duck defensemen in assists (10) and points (12).  The former second-round draft pick of the Ducks (55th overall in 2014) has displayed some promise as an offensive defenseman.  His nine goals in 80 games last season was second to Hampus Lindholm (13) among Duck defensemen, while his 32 points tied Cam Fowler for second among the blueliners behind Josh Manson (37).  He started this season slowly, going 1-2-3, minu-5, in his first 14 games.  Over his last 14 games, though, Montour is 1-8-9, minus-2.  Montour is without a point in four career games against the Caps and is minus-1. 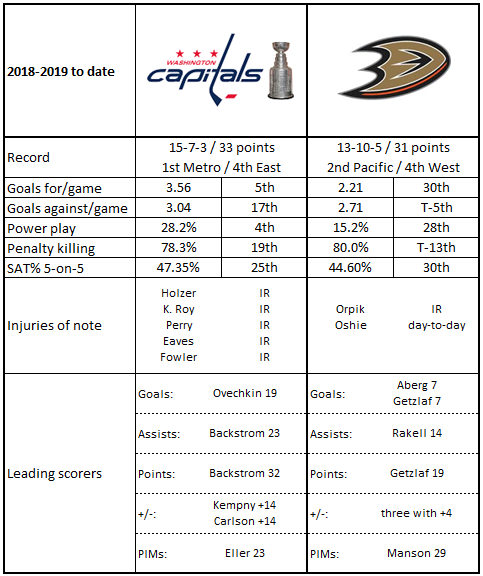 1.  This will be a team trying to overcome an opponent’s strength in recent games with a decided weakness. While the Caps have killed 22 of 23 shorthanded situations in their seven-game winning streak, the Ducks have the 23rd ranked road power play and are only 3-for-19 overall (15.8 percent) in winning five of their last six games.

1.  That nine game streak to end 2016 and begin 2017 for the Capitals featured four shutouts over the last six wins of the streak.  Braden Holtby shutout the Columbus Blue Jackets, Ottawa Senators, and Chicago Blackhawks, while Philipp Grubauer blanked the Philadelphia Flyers in what would be the last game of the winning streak.

2.  That winning streak was not the end of the Caps’ points streak.  They dropped a wild 8-7 overtime decision to the Pittsburgh Penguins to end the winning streak, but they then won three more in a row.  When added to the 2-1 Gimmick loss to the New Jersey Devils in the game before the winning streak started, it made for a 14-game points streak (12-0-2).  It was part of a larger amazing run in the 2016-2017 season in which the Caps went 26-4-5 over a 35-game stretch from December 3rd through February 18th.

When the Anaheim Ducks traded for Adam Henrique in November 2017, they might have been anticipating obtaining from the New Jersey Devils a player about to embark on the prime goal-scoring years of his career.  After posting 27 goals in 117 games over parts of three seasons to open his career, Henrique averaged almost 23 goals a season over his next four years, hitting the 30-goal mark in 2015-2016.  However, he had only four goals in 24 games last season when he was traded to the Ducks with Joseph Blandini and New Jersey's 3rd round pick in 2018 entry draft for Sami Vatanen and a conditional third round pick in 2019 or 2020 NHL Draft.  He did step up his goal scoring after heading west last season, netting 30 goals in 57 games.  He has fallen back a bit so far this season with six goals in 28 contests going into Sunday’s game.  What he does have is respectable point production in recent games, recording a point in seven of his last eight games (2-5-7).  Henrique is 6-5-11, minus-13, in 25 career games against Washington.

Andre Burakovsky had a sluggish start to the 2018-2019 season, but he is giving hints that he might be breaking out of those early season doldrums.  He is 2-1-3, plus-1, with eight shots on goal after posting only two goals and two assists with 23 shots on goal over his first 20 games.  Oddly enough, the four goals he has in 25 games this season matches the total he had in his first 25 games last season.  In a way, that’s the good news.  In the “glass-half-empty” category, Burakovsky still has to demonstrate he has the durability that makes a player dependable (remember, he missed 44 games the previous two seasons) and he was stuck on 12 goals in each of the last two seasons before this one.  His skills profile suggests he is capable of much more.  His engagement, even if it does not result in goals or points, matters, at least early.  For example, in 10 games in which he recorded at least two shots on goal, the Caps are 8-2-0, while they are 7-5-3 in the 15 games in which he recorded one or no shots on goal.  Burakovsky is 3-0-3, plus-2, in five career games against Anaheim.

Anaheim has not scored more than three goals in a road game since they beat the Sharks in San Jose, 5-2, in their first road game of the season.  On the other side, the Ducks have allowed four or more goals in four of their last seven contests on the road.  They do have wins in their last three road contests, so the Caps cannot just show up for a win.  But the Ducks are not a particularly strong road team this season, either.  The Caps have been an opportunistic team on their seven-game winning streak, whether getting fine goaltending from Braden Holtby (5-0-0, 1.49, .957 on this streak) or goal scoring from a variety of players (seven from Alex Ovechkin, six from Tom Wilson, and five from Nicklas Backstrom, including his second career hat trick against New Jersey on Friday).  The Caps can – and should – have enough weapons to dispatch the Ducks to close the home stand, even with the fine recent play of goalie John Gibson.