The Peerless Prognosticator is ON THE AIR!!! -- Game 46: Capitals at Stars, January 21st

The Washington Capitals take a 12-game points streak to Dallas on Saturday night and face the Stars in a rink that has been one of the most unfriendly venues to the Caps in all the NHL.  In fact, the Capitals have never won a game in regulation time at American Airlines Center since it opened in 2001.  The last time the Caps won a game in regulation time in Dallas was October 17, 1995 at Reunion Arena, 4-3.  Some odd facts about that game…

In their ten-game skid, Patrick Eaves and John Klingberg lead the club in goals with four apiece.  Klingberg has quietly become one of the top offensive defensemen in the league.  Over the three seasons he has been in the league, he is one of a group of 13 defensemen with at least 25 goals and at least 120 points.  That is a group that includes Brent Burns, Oliver Ekman-Larsson, Shea Weber, Kris Letang, P.K. Subban, and Erik Karlsson.  You know…the biggies.  This season, he is right there again, tied for 11th in goals among defensemen (7) and tied for 13th in points (26).  Oddly, perhaps, his offensive contributions do not track well with team success.  Dallas is 3-2-1 in the six games games he recorded goals and 8-8-5 in the 21 games he registered points.  Klingberg is 0-4-4, plus-1, in three career games against the Caps. 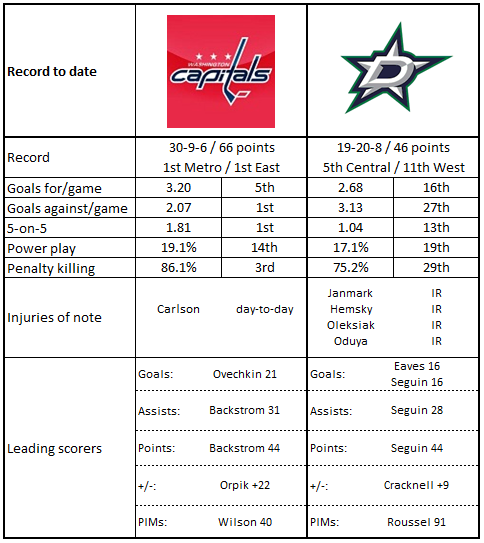 1.  If the Caps are going to get well on the power play, this is the team against which to do it.  Over their last ten games, the Stars allowed power play goals in eight games (multiple power play goals five times) and are 23-for-36 overall (63.9 percent).  On the other hand, the Stars do have the 11th-ranked home penalty kill (83.6 percent).

2.  When on the power play, no team has allowed more shorthanded goals than the Stars (eight, tied with Philadelphia).

4.  If the Stars are trailing after two periods, a loss has been automatic.  Dallas is one of two teams that have not yet won a game when trailing after 40 minutes.  They are 0-16-2; the New York Islanders are 0-11-1.

3.  The Caps have not allowed a first period goal in their last eight games.  No, not even in that 8-7 fun house game against Pittsburgh.  Toronto was the last club to do it, back on January 3rd.

4.  There is even strength, and there is 5-on-5.  Don’t confuse them.  The Caps are tied with the New York Rangers for the most goals scored at 5-on-5 this season (105).  However, Washington is one of seven teams that has not yet scored a 4-on-4 goal this season.

He is not quite the grand old man of the Lone Star State, but Jason Spezza has a lot of miles on him.  It seems just yesterday that he was the second overall draft pick of the 2001 entry draft, taken by the Ottawa Senators.  Now, 883 games later, he is entering the autumn of his career at age 33, the fourth-oldest player on the Stars’ roster of skaters.  This season, while Spezza is tied for third on the club in total scoring (27 points, with Patrick Eaves), he is far from the production of his heyday.  His seven goals in 40 games is his lowest goals-per-game output (0.18) of his career.  His points-per-game (0.64) is the second-lowest of his career, surpassed only by his first season in the league in 2002-2003 (0.68).  Although he has points in nine of his last 14 games (12 points overall), Spezza does not have a goal in his last 11 contests.  He has had his success against the Caps, though, going 12-22-34, plus-1, in 35 career games against Washington.

Alex Ovechkin scored the first two goals of the Caps’ 5-2 win over the Pittsburgh Penguins on January 11th, the night he reached the 1,000 point mark.  Since then, 11 different Capitals have combined to score 28 goals.  None of them are Ovechkin:

Including that January 11th win over the Penguins, the Caps are 4-0-1.  Ovechkin does have six assists since those two goals against the Penguins, but clearly, at least for the moment, it’s not all about how Ovechkin produces in terms of goal scoring. Nor is it how much ice time he gets.  Only once in the last 21 games has he skated more than 20 minutes (he did have a 20:00 night against the Islanders on December 27th), and in those 20 games in which he did not pass 20 minutes, the Caps are 16-2-3.  Ovechkin is, for the time being, less a solo performer and more a “headliner” who generates interest from opponents (such as cheating to his side on power plays), allowing the ensemble to shine.  There are fans who might be nostalgic for Ovechkin’s 50-goal seasons, but that seems less and less a likelihood this season (he is on a pace for 38 goals) just as the club seems to be establishing its depth and consistency up and down the roster.  Ovechkin is 7-3-10, minus-2, in 12 career games against Dallas.

Dallas is known as “Big D.”  For the Capitals, “D” has been synonymous with “despair” in their meetings against the Stars in Texas.  This is not the best of Dallas teams, though.  They can muster a lot of offense, but their defense and special teams, particularly on the penalty kill, leave much to be desired.  One would think that a club having as much success as the Caps on offense recently (54 goals in their last 11 games) would be able to exploit the defense and goaltending deficiencies of this club and exorcise the demons that have tormented them in this city.