The Peerless Prognosticator is ON THE AIR!!! -- Game 19: Capitals at Predators, November 14th

Fresh of a sweep of their first “home stand” of the season – ok, two games – the Washington Capitals head back out on the road for a two-game roadie beginning with a visit to Bridgestone Arena and the Nashville Predators.

The Caps head out on their road trip having buttoned things up nicely since suffering a 6-2 loss to the Vancouver Canucks on October 26th. In eight games since then, the Caps have allowed to total of 16 goals and have allowed as many as three just twice.

They will need that defense against the Preds, who come into this game having scored 17 goals in their last four games, all of them wins to jump into third place in the Central Division. The scoring load over that four-game winning streak has a distinct Nordic quality. Viktor Arvidsson, a native of Skellefteå, Sweden, is tied for the club lead in goals in that span (three, with P.K. Subban) and leads in total scoring over those four games (3-2-5). It is no fluke, either. Arvidsson, in his second full season with the Predators last year, recorded 31 goals last season, tying him for the team lead with Filip Forsberg. His three goals in the Predators’ last four games has lifted him into second place on the club in goal scoring (six), behind Forsberg (eight), and two of the three goals he has in this run were game-winners. The odd thing about Arvidsson’s scoring line this season (6-4-10 overall) is that he gets points when he scores goals. He has just one game this season in which he recorded a point without it being a goal among them (an assist in Nashville’s 5-4 Gimmick win over Pittsburgh last Saturday). Arvidsson is 2-1-3, minus-1, in five career games against Washington.

Calle Jarnkrok is tied for second in points for the Preds in their four-game winning streak (2-2-4). The native of Gävle, Sweden, is in his fourth full season with Nashville and has demonstrated over the past two seasons his potential to be a dependable mid-teens goal scorer (he had 16 goals in 181 games two years ago and 15 in 81 games last year). His recent surge in points comes after a lengthy dry spell, one in which he opened the season with an assist in a 4-3 loss to the Boston Bruins, and then went his next eight games without a point. Jarnkrok is 3-3-6, plus-6, in his last seven games. The thing with Jarkrok is that more Jarnkrok seems to equal more success. Nashville is 6-1-2 in games in which he skated more than 15:30, 3-4-0 in games in which he skated less. He is 0-2-2, plus-1, in seven career games against the Caps.

Miikka Salomaki completes the Nordic trio at the top of the Predator scoring list over their four-game winning streak. The Raahe, Finland, native has hadan up and down existence with Nashville over his four-year NHL career. He had a one-game stint in 2014-2015 (he scored a goal in what was his NHL debut), followed up by a formal rookie season in which he was 5-5-10, minus-1, in 61 games. Last season his development was cut short as he missed all but five games to a hand injury. He started slowly this season, going without a point in his first nine games. However, he is 1-3-4, plus-2, in his last three games. Salomaki is without a point in two career appearances against the Capitals. 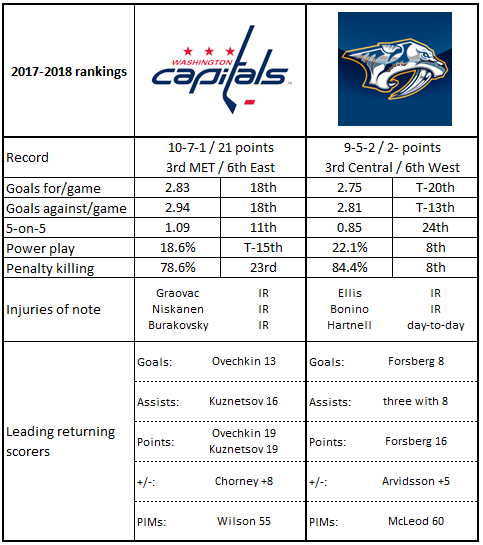 1.  Nashville is dead last in the league in first period scoring with eight goals in 16 first periods so far. Not that they give up a lot, though. Only the St. Louis Blues (nine, through Sunday’s games) have allowed fewer than the Predators (10). If you’re late to a Predators game, chances are you haven’t missed much.

5.  Nashville has quite a disparity in their home and road penalty kill, and not in the way you might assume.  On the road, the Predators have killed 47 of 52 shorthanded situations (90.4 percent), while at home they are just 18-for-25 (72.0 percent).

1.  The Caps have alternated wins and losses on the road since the start of the season (5-4-1). If the pattern holds, they will beat Nashville, having lost a 3-1 decision to the Buffalo Sabres in their last road contest.

2.  The Caps have tightened up in road games since the start of the season. In their first six road games, the Caps allowed 27 goals (4.50 per game). In their last four road contests they allowed just nine goals
(2.25 per game).

3.  The Caps have a 5-1-0 record in November, and the success might be a product of balance. Four players have two or more goals, Alex Ovechkin leading with three. Eleven players have at least one goal over the six contests. Six different Caps have four or more points, Lars Eller and John Carlson leading with six points apiece. Sixteen different skaters have points overall.

4.  In ten wins this season, seven different Caps have game-winning goals; T.J. Oshie the only one with two. Oshie and Evgeny Kuznetsov have the Caps’ two game-deciding goals in the freestyle competition.

5.  John Carlson is one of 13 defensemen in the NHL to have been on ice for more than 20 goals scored by the Caps and more than 20 goals allowed (through Sunday’s games). The list includes Erik Karlsson, Aaron Ekblad, Kris Letang, and P.K. Subban, among others, so it’s not a list of stiffs.
The Peerless’ Players to Ponder

Back to the Nordic theme. If Pekka Rinne gets the call against the Caps in goal for the Predators, he will do no worse than keep pace with Carey Price in a tie for seventh place among active goaltenders in games played (both currently have 520, and both of their teams play on Tuesday night). Rinne holds the seventh spot to himself in wins among active goalies (277), more than 100 more wins than the second-place winningest goalie in Nashville history, Tomas Vokoun (161). Rinne, a three-time Vezina Trophy finalist (never a winner), most recently in 2014-2015, has had an up and down career with the Preds, at least insofar as his save percentage is concerned. In ten full seasons with Nashville, including this one, that save percentage ranged from .902 on the low end (in 24 games of the 2013-2014 season, cut short due to hip surgery) to .930 on the high end (in 64 games of the 2010-2011 season).

This season appears, at least in the first quarter of it, to be one of his “up” years. His .929 save percentage to date would be, if sustained over the entire season, his second highest career mark for a full season. But even in the context of this season there has been a bit of that up and down quality. In his first two games he had a combined save percentage of .869, splitting a pair of decisions. Then, Rinne went on a 4-0-2 run in which his save percentage was .963 and included his only shutout so far this season. In his last four game, that save percentage is .906, but it includes a 19 save on 23 shots performance in a loss to St. Louis and a 26 saves on 30 shots performance in a win over Pittsburgh. Those games bookend a pair of performances over which he stopped 70 of 74 shots (.946) in wins over Anaheim and Columbus. Rinne is 3-1-0, 2.25, .920 in four career appearances against Washington.

Among active Capitals, Nicklas Backstrom is the active leader in career points against the Nashville Predators (4-11-15 in 15 games).  In that respect, this opponent might be just the tonic Backstrom needs to shake off the cloak of a slump that has him with just one point (an assist) in his last nine games.  Backstrom has been especially unlucky – or just plain dry – scoring goals.  He is 11 games without a goal since he had one in the 8-2 pasting the Caps took from the Philadelphia Flyers on October 14th.  Over those 11 games he is 0-for-21.  He is still doing the little things, though.  He has at least one blocked shot in nine of those 11 games and is 52.6 percent in faceoffs.  Nevertheless, the Caps would like to get Backstrom going, seeing as how they are 4-2-1 in the seven games in which he registered a point.

This will be a good opportunity for the Caps to take stock of where they are. They have improved lately, but they have not really dominated games with any regularity. They will be visiting a city in which their success has been uneven (5-6-1 with one tie, all-time). What they might improve upon is getting off on the right foot against opponents early, a challenge against a team like Nashville that plays the early parts of games so close to the vest. This is one of those games – w weeknight game on the road against a team that is neither a natural rival nor one they see often – that can cause the Caps to trip after some recent success. It is the sort of game they pushed through to wins over the past few years on the basis of depth and skill. This year, they will have to find motivation and will in greater supply in games such as this.