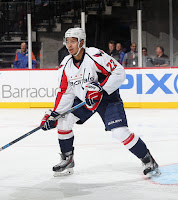 “Patience is bitter, but its fruit is sweet.”
-- Jean-Jacques Rousseau

At this time last year, the Washington Capitals and their fans were contemplating the possibility of starting two rookie defensemen as a regular feature of their lineup.  Neither Madison Bowey nor Christian Djoos started for the Caps on Opening Night.  But whereas Djoos made his way into the lineup and more or less remained there through the regular season (63 games) and the playoffs (22 games), Bowey found his way into the lineup but dressed for only 51 games, none after February 20th.  He would be the roster casualty of the Caps obtaining Michal Kempny for the stretch run to the postseason.

Not that his season was a failure so much as it was unsatisfying.  For example, Bowey was only the 18th rookie defenseman in Caps history to dress for at least 50 games, but he was the only one of those 18 defensemen failing to record a single goal.  He is one of only a dozen Caps rookie defensemen in franchise history to post at least a dozen assists.  Mike Green didn’t do it (ten), despite playing in almost 20 more games (70) in his rookie season.  Kevin Hatcher came up short, too (10 assists in his 1985-1986 rookie season).  For that matter, so did Djoos (11).

If there was a disturbing aspect to Bowey’s play, it was in taking penalties.  Among the 14 rookie defensemen to appear in at least 50 games, Bowey tied for third in penalty minutes taken per game (0:28, with Tampa Bay’s Mikhail Sergachev).  And, there were the possession numbers.  Of that same group of 14 rookie defensemen, his shot attempts-for percentage at 5-on-5 was the worst of the group (44.69; source: NHL.com).  He was the only one of the group whose number in this category was under 50 percent when the team was behind (47.99).  This despite 54.62 percent of his total offensive and defensive zone starts being taken in the offensive zone.  There might be a fair number of Caps fans, however, who would attribute much of this result to his being paired with Brooks Orpik for much of his time.

Despite not scoring a goal in his rookie season, Madison Bowey finished in the top ten among rookie defensemen in points per game (tenth/0.24 per game; minimum: 30 games).

One has to think the goal scoring will come.  Consider that no defenseman in Kelowna Rockets history (the team for which Bowey played in Canadian junior) has more career goals than Bowey (58).  He did get a fair amount of responsibility for a n NHL rookie otherwise.  Bowey was one of 30 rookie defensemen to skate 15 minutes in at least 13 games.

Hey cuz?  About that goal scoring in junior.  Bowey averaged 11.6 goals per season at Kelowna.  Well, Scott Hannan averaged 11.5 per season with Kelowna, and he ended up with just 39 goals in 1,166 career NHL games.  And about that ice time.  In the 14 games in which Bowey skated at least 15 minutes last season, the Caps were 5-8-1.

The Big Question… Can Madison Bowey crack a lineup that looks set in its top-six defensemen?

What was the Capitals’ biggest question mark going into last season – the three defensive pairings – appears to be the most solid fixture on the roster going into this season.  Matt Niskenen – Dmitry Orlov, John Carlson – Michal Kempny, and Brooks Orpik – Christian Djoos appear to be the pairs that would be penciled into the lineup if tonight was Opening Night.  It leaves Madison Bowey in a bit of an odd place.  He is not the sort of veteran that would normally occupy a seventh defenseman spot on a roster the way that a Taylor Chorney might have last season.

Bowey needs playing time, and under ideal circumstances, if the team manages his development with that in mind, he might be starting the season in Hershey.  But Bowey is no longer waiver exempt.  Unless he has an outstanding camp, he could find himself in an odd no-man’s land, unable to crack the lineup for significant stretches, but a player the team would not prefer to expose to waivers.  Add to this the fact that his position on the depth chart might be challenged from below by players such as Lucas Johansen or Jonas Siegenthaler, and it makes for an interesting situation to watch, if an uncomfortable one for the player.

This is not to say that Bowey will become Mike Green 2.0, any more than he will become the scoring-limited sort like Scott Hannan.  His immediate challenge is getting playing time on a team that is largely set in its top-six defensemen.  That is not a bad thing for the Caps, and it might not be a bad thing for Bowey, who could end up finishing his apprenticeship in Hershey this coming season.  He has worked his way back from what was a gruesome injury in December 2016 that made for a bitter interruption in his development.  As it is, he is at a stage in his career and plays at a position where patience is called for.