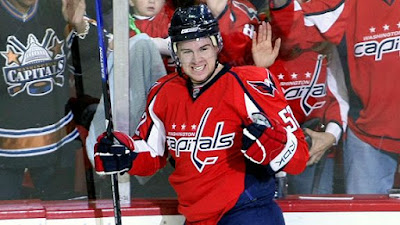 We saw that sign at an ice cream establishment on our drive up to Hershey this past weekend, where we watched the Bears win a couple of playoff games. It brought us to mind of the sort of season had by Mike Green. Whether the product of injury, illness, or demonic possession, one could not have foreseen the sort of drop off in production Green had between his regular season and his playoffs. Comparing his regular season of 68 games to his playoff numbers, extrapolated over a comparable 68 games, the result is as follows:

But let’s get to dessert first. Green had one of the most prolific seasons by a defenseman. His league ranking among defensemen in several categories bears this out:

Green did this in only 68 regular season games, at least five fewer games played than any of the top-20 scorers among defensemen in the NHL. Dig deeper, and the same results appear (all for defensemen playing in at least 50 games):

And it’s not as if he padded his stats against also-ran opponents, either. Against the other seven Eastern Conference playoff teams, he was 10-15-25, +12 in 27 games. But nestled in that last set of numbers is this… 0-0-0, -4. That was Green’s line in four games against Philadelphia, and it might have served as a bit of a harbinger of things to come in the post season. Philadelphia is among the more aggressive forechecking and puck pursuit teams, and Green had his troubles here (yes, it’s a small sample).

Looking at his ten-game segments is a bit deceptive...

He lost virtually the entire third segment to a shoulder injury, playing one game (he was 1-2-3 in his return from injury, against Ottawa). It masked what would be a fairly consistent first half of the season, followed by rather substantial improvement in the last half. It was in that last half (in Games 49-56) during which Green set a record for consecutive games with a goal scored by a defenseman. During those eight games, he was 10-7-17, +8. That is important in that if you take that stretch away, Green was still 21-35-56, +16 in 60 games, which would still have left him tied for sixth in scoring among defensemen while having played at least 17 fewer games than any defenseman above him.

Green had a big year on the offensive side of the ledger.

It’s not as if he was a slug on defense, either, although he remains something of a work in progress in that regard. The evidence of his progress is perhaps reflected best in his ice time while killing penalties. In 2007-2008, Green averaged a grand total of 20 seconds a night on the PK, last on the team among defensemen (50 games, minimum). This year, he averaged 2:28 a game. That was still only fourth on the team (among defensemen playing at least 50 games), but clear evidence of his being given more responsibility in his own end. And he responded to the increased responsibility. Although he did not face the best power play opposition (worst on the team among defensemen), he was on the ice for fewer than half of the goals scored against per-60 minutes in those situations than the next best Capital (John Erskine).

But then, there were the playoffs. In his last ten regular season games, Green was 6-6-12, +2. That was against some pretty weak competition (nine of those games were against teams that did not make the playoffs), but there was nothing in his play to suggest a full-blown meltdown in the playoffs. From our seat, Green had to be injured (the shoulder he injured earlier in the year, made worse by an awkward tumble into the boards in the opening round series against the Rangers?). He was tossing change-ups at the net, and he was avoiding contact when pressed in his own end. It make for a lack of offense at one end (the one goal he scored coming in Game 6 of the opening round) and getting abused in his own end (minus-6 in the last six games of the second round, no plus games among them, and Green is still the leader, so to speak, in giveaways in the 2008-2009 playoffs, the only player with more than 20). It probably isn’t fair to say this in light of what we think had to be an injury, but if there was one factor above all others that contributed to the Caps’ early exit, it was the difficulties Green had at both ends of the ice.

At the start of the season, we said this of Green…

“In the last ten years, only one defenseman playing more than 60 games in a season achieved a point-per-game performance (Nicklas Lidstrom – 80 points in 80 games in 2005-2006). Green, given his talent, the talent around him, and the philosophy of the club, appears best positioned among current NHL defensemen to achieve that level of production.”

We also said it wouldn’t be this year – we were wrong about that. And Green had an otherwise sweet regular season, historic and certainly worthy of a defenseman selected as a finalist for the Norris Trophy. But the playoffs were a helping of broccoli – perhaps something to be endured and perhaps healthy in the long run. But it did not leave a good taste in anyone’s mouth.