The Peerless Prognosticator is ON THE AIR!!! -- Game 11: Capitals at Canadiens, November 1

The Washington Capitals wrap up their “four straight games out of town” tour (they stopped off at home after the win in Calgary last Saturday) with a visit to Bell Centre to face the Montreal Canadiens.  The Caps are looking to build on the success of the western Canada leg of the journey, having won two of three games.  On the other side, Montreal will be hoping to wash the taste of a 4-1 loss to the Dallas Stars at Bell Centre on Tuesday out of their mouths.

The Canadiens started the season fast, opening with a 4-1-1 record in their first half-dozen games.   Since then, however, Montreal is 2-2-1 to slip to 6-3-2 overall and into fourth place in the Atlantic Division.  Montreal has had a consistent offense in the 2-2-1 slide, scoring three goals in four consecutive games (five in a row, including the win against the St. Louis Blues before this slide started) before being held to one by Dallas.  The inconsistency has been on the defensive side of the ledger where the Habs have alternated four goals allowed in games with better defensive efforts, a 3-2 win over the Calgary Flames and a 3-0 whitewashing of the Boston Bruins.

The defensive inconsistency lately has not spread to goaltender Carey Price, at least not in its entirety.  He was the goalie of record in four of the five decisions (2-1-1), but he posted a goals against average of 2.23 in those games and a save percentage of .919.  Price is coming off a season in which he appeared in only 49 games, a season interrupted by injury absences due to a lower body injury and a concussion.  It matters because heavier workload has agreed with him over the years.  Six times before this season Price appeared in more than 60 games, and in four of them he posted save percentages over .920, and in only one of them did he post a goals against average over 2.50 (2.83 in 52 appearances in 2008-2009).  He has been especially tough to beat at home over his career – 164-92-47, 2.30, .922, with 28 of his 41 career shutouts.  However, he has struggled against the Caps, going 6-13-4, 3.30, .891, with one shutout in 23 career appearances.

Max Domi leads the Canadiens in points (5-6-11), and he is one of 20 players in the league to have posted at least ten points and logged at least ten penalty minutes (he has 10, although six of those came in Tuesday’s loss to Dallas).  Domi is in his first season with Montreal, having arrived in a trade with Arizona for Alex Galchenyuk in one of those trades in the category “players who need new scenery.”  Domi had a six-game points streak stopped against Dallas (5-3-8), and he will come into this game having scored only one of his five goals on home ice this season.  His dispatch to Montreal would seem to be a product of his being unable to capitalize and improve on a fine rookie season in which he went 18-34-52, plus-3, with Arizona.  He managed only 18 goals and 73 points over the next two seasons combined.  His 11 points in 11 games so far would suggest the change in scenery has been beneficial.  Domi is 0-4-4,. Plus-4, in six career games against Washington.

For the first seven seasons of Jeff Petry’s career, he was a defenseman of modest offensive production, more of a “glue that binds” sort of player.  He never topped eight goals in any of those seasons (four-plus seasons with Edmonton and two-plus seasons with the Canadiens) and never reached the 30-point mark.  Last year was a different story.  In the first season of his career in which he appeared in every contest in an 82-game season, he went 12-30-42, the goals, assists, and points being career bests.  He did it largely by being the go-to force from the blue line on the power play.  Petry’s six power play goals doubled his career total, and his 17 power play assists were more than he recorded in his previous five seasons combined (13).  He also skated 23:30, also a career high.  His goal scoring so far this season is not matching last year’s pace (one), but he does have nine points in 11 games so far.  Petry is 2-3-5, minus-4, in 13 career games against the Caps.

1.  Montreal does a good job suppressing shots.  The 28.4 shots per game allowed is fifth-best in the league.

2.  The Canadiens have been gifted a lot of power play chances on home ice (28/third-most in the league), but they have done little with those opportunities (17.8 percent/18th).

3.  Montreal closes games poorly.  They have only six third period goals all season, last in the league.

4.  The second period is known as the “long change” period for team, their bench being across the red line from the goal they must defend.  For the Canadiens, it is the “power play period.”  No team has spent more time on the man advantage in the middle period than Montreal so far (35:11), almost 12 more minutes than they have spent shorthanded (11:47).

5.  The Canadiens are capable of playing from behind with a certain urgency in one respect.  Their shot attempts-for percentage at 5-on-5 (61.50) is fourth-best in the league. 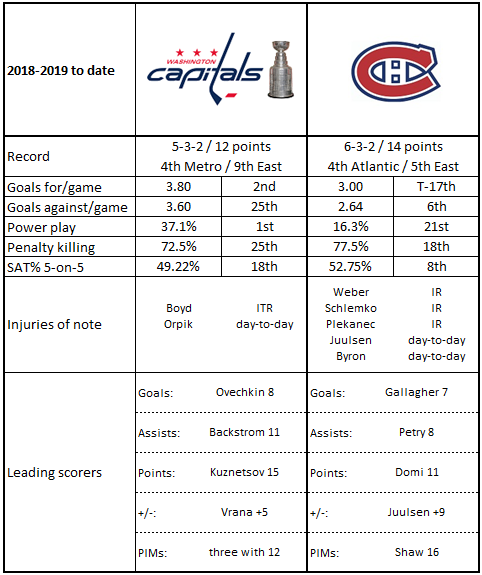 1.   Alex Ovechkin scored eight goals in October. It will surprise precisely no one that since he came into the league in the 2005-2006 season, Ovechkin has scored goals in more games in the month of October than any other player, 64 games in all (72 goals).  It would surprise only a few that Ovechkin happens to have more goal-games in every month of the NHL regular season calendar (October through April) since he came into the league.

4.  OK, so which forward you got with the most shorthanded time on ice per game… Lars Eller? Chandler Stephenson?  Nicklas Backstrom?  No, no, and no.  It’s Devante Smith-Pelly with 2:11 per game.

5.  The key to stopping the Caps’ power play might be to keep them from getting any shots to the net. Sounds almost cliché, but the Caps have 13 goals on 44 shots, a 29.5 percent shooting percentage.  Evgeny Kuznetsov has five power play goals on only 11 shots 45.4 percent).

Did you ever have something in your shoe that doesn’t quite hurt, but annoys the heck out of you?  You take off your shoe, shake it vigorously, put it back on, only to find your annoyance is still there?  Well, that’s Brendan Gallagher.  He’s not so much a “little ball of hate” in the mold of Pat Verbeek from years gone by or Brad Marchand of more recent vintage.  He’s more like, “what’s that damned buzz in my ear that won’t go away?”  But while he might annoy, poke, prod, get under the skin of opponents, he has developed into a talented offensive player.  Last season he posted a career high of 31 goals, more than he had in 117 games over the previous two seasons combined (29). He came out of the box hot this season, posting seven goals in 11 games played to date, three of them game-winners.  Only once in six games on home ice so far has he failed to record a goal (October 11th in a 3-0 loss to Los Angeles).  Gallagher is 3-1-4, minus-7, in 14 career games against the Caps.

After being concussed in a pre-season game in St. Louis on September 25th, Michael Kempny was absent from the lineup until taking the ice for the third regular season game for the Caps.  His ice time has not be rationed in any extraordinary way since his return, ranging from 16:06 against Edmonton last Thursday to 20:38 against Calgary last Saturday, averaging 17:44, about a minute more than he averaged with the Caps in 22 games to close the regular season last spring.  What he does not have in those minutes is point.  Kempny has one assist, that coming in a 6-5 Gimmick loss to Florida on October 19th.  Not that he was a big point producer last spring, posting two goals and an assist in those 22 games with Washington.  However, with Dmitry Orlov (0-1-1) and Christian Djoos (0-2-2) with sluggish offensive starts from the blue line, any contribution Kempny makes would certainly be welcome.  He does not have a point in four career games against Montreal.

Washington has had an unworldly level of success at Bell Centre.  The Caps have not lost a game in regulation in Montreal since January 10, 2009 (a 5-4 loss on a Sergei Kostitsyn goal with less than 30 seconds left).  Since then, the Caps are 13-0-2, only three times in that span did the Caps allow more than two goals, and only four times did they allow more than 30 shots on goal.  They have outscored Montreal by a 53-28 margin in that span.  The default position might be “Montreal is due.”  We don’t do default.