The Peerless Prognosticator is ON THE AIR!!! -- Game 46: Capitals at Blue Jackets, January 19th

Having dispatched their closest pursuers in the Metropolitan Division on Sunday night, the Washington Capitals pivot to take on the division's worst team on Tuesday evening.  The Caps spotted the New York Rangers a goal, then came back to win, 5-2, to start Week 15 of the NHL season.  They now head to Columbus to face the Blue Jackets in a Buckeye Blockbuster.

Well, perhaps not a “blockbuster,” the noise of the cannon at Nationwide Arena notwithstanding.  Since the Blue Jackets beat the Caps, 5-4, in a Gimmick on January 7th, Columbus is 2-3-1.  While those wins have come in their last two games, ending a four game losing streak, those wins also came at the expense of the Toronto Maple Leafs and the Colorado Avalanche, teams that find themselves outside the playoff mix.

Colorado has struggled to score in this recent half-dozen game run.  The Blue Jackets recorded only 13 goals over those games , giving up 19 in the process.  Brandon Dubinsky has almost a third of that total, scoring three goals (3-1-4) in his last five games after enduring a seven-game streak without one.  While Dubinsky has been scoring more often of late, what he has really been rolling up is penalty minutes.  Over his last 17 contests Dubinsky has 29 penalty minutes, a total that includes each of his three fighting majors this season.  Dubinsky, a hard-nosed sort of player dating back to his days with the New York Rangers, leads the team in credited hits (114), and he leads the club in faceoff winning percentage (51.7).  In 27 career games against Washington, Dubinsky is 5-12-17, plus-6.

Two other Blue Jackets have more than one goal over their past half-dozen games.  Cam Atkinson has a pair of scores, both coming in losses, a 4-2 loss to Minnesota on January 5th and a 4-3 overtime loss to Carolina on January 9th.  The odd part about his recent performance is that his two goals came in the four losses, over which he was a minus-4.  He is without a point in his last two games while going plus-2.  Atkinson has both of the Blue Jackets’ shorthanded goals this season, one of them coming in that loss to Carolina on what was his only shot on goal of that contest.  He is 6-4-10, plus-5, in 11 career games against Washington.

Alexander Wennberg has a pair of goals in his last half-dozen games as well.  One of them was the game-winner in Columbus’ 3-1 win over Toronto last Wednesday, breaking the Blue Jacket’s four-game losing streak.  It was the first game-winning goal of his career in what was his 101st NHL game.  Wennberg has been reasonably hot lately.  Over his last 19 games he is 4-11-15, this coming after he recorded a single goal (his only point) in his first 15 games of the season.  Wennberg has two assists in five career games against the Caps.

Goaltender Sergei Bobrovsky was activated off the injured reserve list on Friday after spending more than a month on the shelf, the result of his suffering a groin injury on December 8th against the Los Angeles Kings.  With Bobrovsky unavailable, Columbus resorted to goaltending by committee.  It has not been successful.  While Bobrovsky’s numbers do not overwhelm (11-12-6, 2.52, .916, with one shutout), the trio of Joonas Korpisalo, Curtis McElhinney, and Anton Forsberg are 6-13-3, 3.17, .898.  With Bobrovsky activated, Anton Forsberg (the winning goalie in the Blue Jackets’ 5-4 trick shot win against the Caps on January 2nd) was re-assigned to the Lake Erie Monsters of the AHL.

Here  is how the teams compare overall: 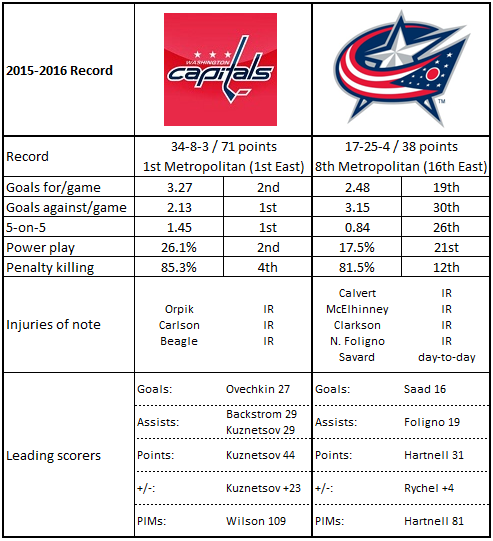 1.  Columbus nicked the Caps for a pair of power play goals on three chances in that 5-4 freestyle win earlier this month.  They have two power play goals in 19 chances (10.5 percent) over six games since then.

2.  Columbus’ penalty kill is decent enough at 81.5 percent for the season (12th in the league).  But they are shooting themselves in the foot lately giving opponents so many opportunities.  Since December 21st, the Blue Jackets have faced 51 shorthanded situations in 11 games, allowing 10 goals (80.4 percent).  Four times over that span the Blue Jackets faced six or more shorthanded situations.

3.  Allowing the first goal has been a gri predictor of outcomes for Columbus.  The Blue Jackets rank last in the league in winning percentage when allowing the game’s first goal (.115/3-20-3).

1.  Justin Williams’ hat trick against the Rangers on Sunday night was the 37th in the league this season and the Caps’ second.  Evgeny Kuznetsov has the other one, in a 7-4 win over the Edmonton Oilers on October 23rd.

4.  Good things happen when Justin Williams records a point.  The Caps are 21-1-0 when he gets a mark on his line of the score sheet.

5.  The Caps were over 50 percent Corsi-for at 5-on-5 in their 4-1 loss to Buffalo last week.  That puts them in position to finish with Corsi-for over 50 percent in consecutive road games for the first time since they did it on October 31/November 3 against the Florida Panthers (a 2-1 win) and the New York Rangers (a 5-2 loss; numbers from war-on-ice.com).

Sometimes, you have to trade value to get value.  That seemed to be the rationale behind the trade executed between Columbus and Nashville when the Blue Jackets sent forward Ryan Johansen to the Predators for defenseman Seth Jones.  It was the kind of trade you do not see much in the NHL these days, a couple of under-25 stars in waiting, each of them a fourth-overall draft pick (Johansen in 2010, Jones in 2013).  Jones, who is still just 21 years old, is in his fourth NHL season and now has more than 200 games on his resume.  The big change for Jones, in addition to discarding those hideous yellow jerseys, is the ice time he is getting.  In the five games he has dressed so far for the Blue Jackets he is averaging 24 minutes a game.  Of the seven top ice time game logs he has this season, five are with Columbus.  Part of that is the fact that three of the games in which he has played went to extra time, but he is still getting a steady, heavy load of minutes.  He is 1-1-2, plus-1, in three career games against the Caps.

No team in the NHL has more wins than do the Washington Capitals, and no Capital has more game-winning goals than Marcus Johansson.  His six game-winning goals in 42 games so far this season equals his total for his previous four seasons combined, covering 276 games.  Since December 1st he has been on a roll.  In 22 games since then he is 9-10-19, plus-6, and he is on an overall pace to finish with his first 50-point season.  Drafted as a center, he seems to have found a comfort level in that position on the Caps’ third line, where he has points in five of six games (4-2-6).  He is even improved on faceoffs.  Last year he rarely took draws, just 26 in 82 games.  This season he has nearly tripled that number (67) and has won roughly half of them (34 for a 50.7 winning percentage).  In 13 career games against Columbus, Johansson is 4-6-10, plus-3

If Columbus does not have the Caps’ full and undivided attention, they should.  Washington has a 2-1 win and a 5-4 trick shot loss in two games against the Blue Jackets this season.  It is not as if the Caps have dominated this season series to date.  There is a bit of uncertainty about who the Caps will start in goal, what with Braden Holtby having to leave Sunday’s game early suffering from dehydration (it is not thought to be serious), but this is a team that has been able to set aside those sorts of issues over the last month.  The Caps have alternated wins and losses over their last five games in Columbus, and if that pattern holds, they will win this game.  As if we needed a reason to pick the Caps.

Posted by The Peerless at 8:10 PM No comments: