The Peerless Prognosticator is ON THE AIR!!! -- Game 71: Washington Capitals at Tampa Bay Lightning, March 18th

The Washington Capitals, mired in a 1-4-1 slump over their past six games, head out on the road to face the very definition of a desperate team on Saturday night when they take on the Tampa Bay Lightning on the gulf coast of Florida. The Caps, who could take the ice on Saturday night behind the Columbus Blue Jackets in the league standings should the Blue Jackets win on Saturday afternoon, will be playing the Lightning for the last time this year in the regular season, hoping to take the season series. Washington lost in a Gimmick, 2-1, back on December 3rd in Tampa, and then they defeated the Lightning, 4-0, at Verizon Center on December 20th.

Tampa Bay, one point behind the Toronto Maple Leafs for the second wild card spot in the Eastern Conference, is on a roll. Although they were thumped by a 5-0 margin by the Maple Leafs on Thursday night, the Lightning have won four of five and are 12-3-3 in their last 18 games, over which they have not lost two in a row.

If there has been a player whose game has fit the nickname “lightning” over those last 18 games, it is Nikita Kucherov. Not only does Kucherov lead the club in goals (12) and points (24) over that span, he is tied for fourth in goals and is fourth among all players in the league over that span. However, that lighting-like run might be coming to an end. When he was held without a point in the 5-0 loss to Toronto on Thursday night it was his second consecutive game without a point after getting points in nine of ten games preceding that (10-10-20).   He has been a remarkably consistent player over the last three seasons in goals (29-30-31), assists (36-36-38), and points (65-66-69). With 12 games to play this season he could obliterate his career bests to date in those categories. Kucherov is 4-3-7, plus-2, in 10 career games against the Caps.

Two other Lightning have averaged at least a goal per game over this 18-game run, although they have done it in different ways and with different presences. Victor Hedman is 7-11-18 in those 18 games and has risen to third overall in points this season among defensemen (59), trailing only Erik Karlsson (63) and Brent Burns (70). His 45 assists trails only Karlsson (50), and no defenseman has more power play points this season than Hedman (27). He also has two of the team’s three game-winning overtime goals in this 18-game run, the first two overtime games of his eight-year career. Your odd Hedman fact…he has as many career points (288) as the Caps’ Kevin Shattenkirk, although he’s done in in 59 more games. Their scoring lines are almost identical: Hedman is 63-225-288, Shattenkirk is 66-222-288. Hedman is 2-10-12, minus-3, in 29 career games against Washington.

Then there is the missing player, Tyler Johnson. He has averaged a point a game in the 12 games he appeared in among the Lightning’s last 18 games (3-9-12), but he has dealt with two bouts of injury. His most current, categorized as a “lower body injury,” has kept him out of Tampa Bay’s last four contests. The Lightning are 3-1-0 in those games, but he is 3-5-8, plus-4, in ten games against the Caps. If he is missing, he will be…well, missed. 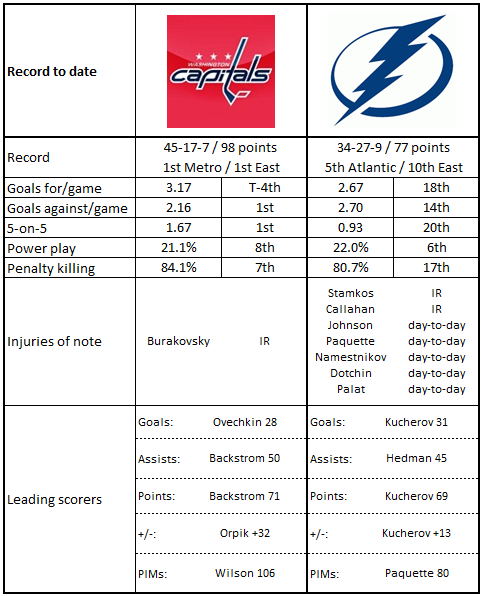 1.  Since February 4th, when Tampa started this 12-3-3 run, only the Chicago Blackhawks have earned more standings points (28) than the Lightning (27).

2.  No team has been involved in more Gimmick decisions over that span that the Lightning, who are 2-1 in three games decided in the freestyle competition.

3.  One thing Tampa Bay has had a problem with in those 18 games is penalties. Only four teams have taken more penalties than the Lightning (79).

4.  Only one team has fewer blocked shots than Tampa Bay (206) since the Lightning started their 12-3-3 run. The Florida Panthers have 178 blocked shots.

5.  The low blocked shot total over their last 18 games would appear to be the classic, “we have the puck, so we don’t block shots” situation. Their shot-attempt (SAT) percentage of 53.02 is third best in that span of time, behind only the Boston Bruins (53.22) and the Los Angeles Kings (57.32; source: NHL.com).

1.  Over their last six games, over which they are 1-4-1, the Caps have allowed 21 goals. Only two teams – the Detroit Red Wings and the New York Islanders – allowed more (22 apiece).

2.  Over those same six games, no team has had more power play chances than Washington (23, tied with the Philadelphia Flyers), but only five teams have a worse power play (13.0 percent, tied with the Flyers).  Then there are the penalty killers. They have been on ice more frequently than any other team, and it’s not close – 27 times (the New York Rangers have been on 21 times).

3.  There is no Capitals on this team who has more than two goals against Tampa Bay in Tampa in seven games over the last five seasons.  Alex Ovechkin, Jay Beagle, and Marcus Johansson have two apiece.

5.  Ray of sunshine or blowing smoke up your sleeve… The Caps have the sixth-best SAT percentage over their last six games (54.76). Then again, that number drops to 14th-best in “close” situations (50.63; numbers from NHL.com).

So, you spend your 21st birthday in Manhattan, playing a game at the world’s most famous arena – Madison Square Garden – and you score a pair of goals, one of them the game-winner to break a 2-2 tie in the third period, in a 3-2 win over the New York Rangers. Do birthdays get any better than that? Maybe not, if you are Brayden Point, but that’s how he spent his 21st birthday on Monday. Point, a third-round pick by the Lightning in the 2014 draft, is very much an unrecognized talent from that draft, ranking 16th in games played in that class (56, all of them this season), 13th in goals (12), and 12th in points (27). In this year’s rookie class he has as many goals as Matthew Tkachuk and more points than Jimmy Vesey. How many fans could pick him out of a lineup, though? Point is one of six players in double digits in points in this 12-3-3 run over the last 18 games (7-3-10) and is tied for second in goals with Victor Hedman, behind Nikita Kucherov (12). He has been unsustainably efficient, scoring those seven goals on just 26 shots (26.9 percent). He does not have a point and is minus-1 in two games against the Caps.

If you look at the Caps-Lightning series over the last five seasons, it would be no surprise to see Alex Ovechkin and Nicklas Backstrom each having scored 20 points in 15 games against Tampa Bay.  There is, however, another player on this team that averaged a point a game in the 15 games he played against the Lightning.  John Carlson is 3-12-15, plus-13, in those 15 games, his dozen assists second only to Backstrom (15) in that span.  Carlson, in fact, leads the team in points against Tampa Bay on the road (0-7-7), and his plus-6 is far and away tops on the team in those seven games (Nate Schmidt is plus-3 in four games).  He has the rather impressive feat of having recorded at least one point in each of the seven games in which he played in Tampa in his career, and he has points in 13 of the 15 games overall in which he faced the Lightning, including the last eight contests.

This is one of those games of which the term “possible first-round matchup” applies.  On February 3rd, the Lightning were dead last in the Eastern Conference, albeit just eight points out of a playoff spot. Eighteen games later, they have jumped over six teams and have but two more to climb over – the New York Islanders and the Toronto Maple Leafs – to grab the second wild card spot. And keep in mind that they have done this without Steven Stamkos playing as much as one second over that period, Stamkos having been out of the lineup since mid-November with a knee injury that required surgery.

The key in Tampa Bay’s recent success, and in fact perhaps the key in this game, might be found in the play of goalie Andrei Vasilevskiy, who has stepped up his game, now that he is firmly the number one goalie after the Ben Bishop trade to Los Angeles. Vasilevskiy appeared in 11 of the 18 games in the 12-3-3 run and posted a 6-2-3, 2.04, .936 record. When he allowed four goals in 26 minutes of the 5-0 loss to Toronto on Thursday night, it was his first loss in regulation in his last eight decisions, in five of which he allowed a single goal, and it was his earliest hook in a home game this season. Given the Caps’ recent offensive struggles, it makes for a formidable challenge, but then again, that’s what this time of year is about overcoming.