It happens to every team after a while, and for the Washington Capitals it happened in Week 14.  It was a winless week for the Caps, but they did scratch a point out of one game to retain a tie-breaker lead in the Metropolitan Division after 14 weeks. 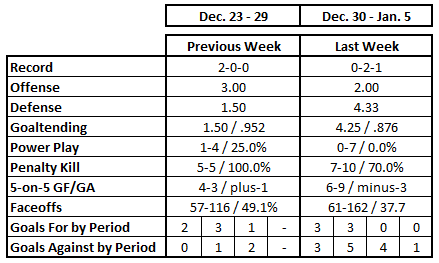 The Caps went winless for a week for the second time this season, the first time since going 0-1-1 in Week 5.  It was the first instance this season in which they lost three consecutive games and the first time they went winless in a week with three or more games since Week 22 of the 2016-2017 season.  They did manage to earn a standings point in the last game of the week, a 2-1 overtime loss to the Dallas Stars.  The loss broke a two-game winning streak for the Caps in Dallas (both wins in overtime), the only time in team history that they won consecutive games against the Stars in Dallas.  The Caps have not won consecutive games against that franchise on the road since they won two in a row against the North Stars in Minnesota in December 1991 and February 1993.  It is just one of those franchises that a team has trouble with on the road.  The Caps have not defeated the Stars in Dallas in regulation since they took a 4-3 decision in October 1995, the streak of games without a regulation win in Big D now extending to 17 games (4-11-2, all four wins in overtime).

The regulation losses, a 6-3 loss to the Nashville Predators and a 5-2 loss in St. Louis to the Blues, were the first consecutive losses for the Caps by three or more goals since November 2017, when they lost a 6-3 decision to Nashville and then dropped a 6-2 decision to the Colorado Avalanche two nights later. 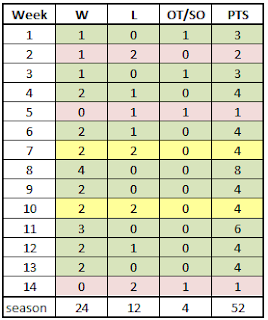 All of a sudden, this is a team that cannot score.  Bet no one reading this would have Chandler Stephenson as the team’s leading goal scorer over the last three weeks (three).  As for Week 14, the Caps had six goals from six different players.

Two of them were especially noteworthy.  On Thursday, Alex Ovechkin scored in the first period against St. Louis giving him 30 goals for the season, becoming only the second player in NHL history to record 30 goals in each of his first 14 seasons in the league.  The goal ended a season-long six-game streak without a goal for Ovechkin.

The other goal of note was scored by Lars Eller mid-way through the second period against Dallas.  That goal was enough for the Caps to drag the Stars to overtime and earn a standings point to salvage something out of the week.

If the week was odd from an offensive standpoint, it might have been made more so by the fact that the points leader for the week was defenseman Michal Kempny (1-2-3).  He finished the week having reached his career highs in goals (four), assists (10), and points (14), through only 37 games played.

Kempny’s performance points to something else, diminished scoring from forwards, especially over the last two weeks.  By five-game blocks for the season, aggregate forward scoring looks like this:

It was a good week and a bad week, just not in the way one might expect in Week 14.  Pheonix Copley continued to shine in a backup role, stopping 27 of 29 shots in the Caps’ 2-1 overtime loss to Dallas to close the week.  The loss broke a personal six-game winning streak for Copley over seven appearances (one no-decision), but he still has a .923 save percentage over his last 13 appearances, a .942 save percentage over his last five appearances.  Odd fact about Copley – since he allowed six goals in his season debut in New Jersey against the Devils, he has the fifth-best save percentage among 34 goaltenders who have appeared in at least ten road games (.923).

It was not a very good week for Braden Holtby.  He stopped only 65 of 76 shots in the losses to Nashville and St. Louis to open the week.  And for Holtby, it was a matter of diminishing returns.  He posted a .900 save percentage in the first periods of the two games, .853 in the second periods of games, and .818 in the third periods of games.  It is part of what has been a bit of a roller coaster start first half for Holtby, alternating streaks of superb netminding with others that are not up to the standard he has established for himself.  For example, his save percentages have looked like this:

The odd part of this is that Holtby has had 18 of 20 starts at home so far this season, only nine of 20 on the road.  Getting some more consistency is one of the things to watch for as the Caps head into Week 15 and the second half of the season.

From time to time over a six-month, 82-game season, teams will struggle with aspects of their game.  What the Caps are experiencing with their power play is something more than a “struggle.”  It has been flat out bad for three weeks now.  You could say that teams are overplaying to Alex Ovechkin’s side of the ice, but he recorded eight of the Caps’ 13 power play shots on goal for the week.  He’s getting pucks through, just not all the way through.  You could say that others aren’t getting enough pucks on net, and with Nicklas Backstrom going without a power play shot on goal for the week and T.J. Oshie being the only shooter from the middle of the power play to get a shot on net (one), there is some truth to this, but there are only so many pucks and so many minutes, and 13 shots on goal in 14 minutes of power play ice time for the week is not an altogether bad result.

But results matter, and for the moment the Caps aren’t getting them on the power play.  Since December 15th, they are 1-for-27 in nine games.  That 3.7 percent conversion rate is 30th in the league over that span, only Columbus (0-for-23) being worse. 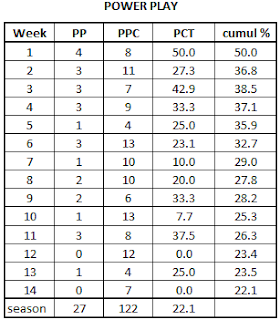 The Caps had two very good weeks killing penalties coming into Week 14.  They did not muster a third.  For the eighth time in 14 weeks the Caps did not reach the 80-percent kill rate, and for the 14th straight week finished below 80 percent for the season.

Timing was a problem for the Caps killing penalties in Week 14.  A power play goal by the Blues tied the game and was the first of what would be four unanswered goals in the 5-2 loss to St. Louis.  Then, the first goal for Dallas to close the week – the only one they scored in regulation – opened the scoring in the Caps’ 2-1 overtime loss to the Stars.

The Caps allowed power play goals in all three games for the week, the current streak of three such games being their longest since allowing power play goals in Games 13-18 in November. It was a bit of an odd result, the Caps having allowed 13 shots on goal in 16:20 of shorthanded ice time, not a bad shots-to-minutes result. 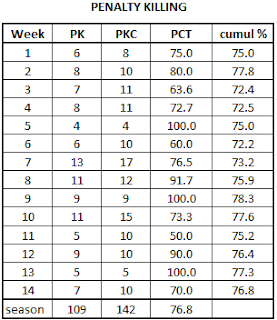 In a bad week, the Caps were awful in the faceoff circle.  They were under 50 percent in all three games and all three zones for the week.  They won one zone in one game for the week (12-for-23 in the offensive zone against Nashville).  No Capital taking ten or more draws finished over 50 percent for the week, and only Nicklas Backstrom finished the week over 40 percent (45.3/24-for-53).  Perhaps it is not a surprising result with Nashville, St. Louis, and Dallas all ranked in the top ten in faceoff winning percentage at week’s end (eighth, fifth, and sixth, respectively).  And by the end of the week, the Caps ranked dead last in the league in this statistic. 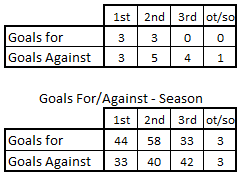 Weak finishes have been an issue flying under the radar all season.  The Caps finished Week 14 with the 16th-best winning percentage in games they led after one period and were tied for the league lead in losses in regulation when leading after two period (three, with Ottawa and Winnipeg).  In Week 14, things were straight forward in this regard.  The Caps held their own in the first periods of the three games, scoring and allowing three goals.  That degenerated into a minus-2 differential in the second period, and the Caps were blanked in the third periods of games while allowing four goals.  The Caps have had a disturbing tendency to go dark late in games.  The 33 third period goals scored for the season is the third-fewest in the league (Los Angeles: 30; Arizona: 28). 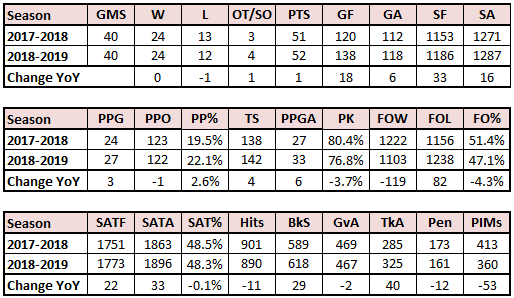 At the end of the week the Caps found themselves pretty much where they were last season after 40 games.  In the standings, the difference is the Dallas game to close the week, grabbing a standings point with an overtime loss rather than a loss in regulation.  They continue to outpace last year’s performance on the offensive side of the puck with more goals, more shots, more power play goals, better power play efficiency (recent developments notwithstanding), and more shot attempts at 5-on-5.

On the other side, the defensive numbers are somewhat worse. Goals allowed, shots allowed, total times shorthanded, penalty killing, shot attempts allowed at 5-on-5, all off from last season’s 40-game pace.  Those total times shorthanded change from last year to this is an interesting development.  That number is up by four instances from the 40-game mark last season despite the Caps being charged with 12 fewer penalties and 53 fewer penalty minutes.  Call that “The Wilson Effect.”  Last year, Tom Wilson had 91 minutes in penalties on 23 penalties called (seven of them majors, three of them misconducts) in 36 games.  So far this season, Wilson has 37 minutes on ten penalties called (three majors, no misconducts) in 21 games.  His penalty minutes per game is down from 2:31 per game at the 40-game point last season to 1:45 per game so far this season.

The Caps are about to embark on the second half of this season just about where they were as they headed into the second half of last season.  They have done so having to deal with more in the way of injuries, had to rely more on youngsters as a result, and have had to break in a new backup goalie.  The path so far this season has not been as smooth as it was to start last season.  But Week 14 was one in which the Caps looked tired.  Teams often go through sluggish phases as the season moves into the winter months, and perhaps it is here, finally, that the Caps are showing some of that post-Stanley Cup hangover.  The Caps will get eight days off at the end of January, but before then will have a schedule that includes ten games in an 18-day period, starting Sunday afternoon in Detroit and including visits to Boston, Nashville, and Toronto.  It isn’t easy being the defending champs, and it will not get easier.  Week 14 showed that if there are any cracks, motivated opponents will take advantage of them.