Another week still in search of a win.  These are the Washington Capitals as they headed into the All-Star Game break.  In one respect, Week 17 was not as bad as Week 16, the Caps having earned one standings point for the week.  But the slide left them three points behind the New York Islanders for the top spot in the Metropolitan Division.  And in other ways, this was the ugliest week in Capitals hockey in quite some time. 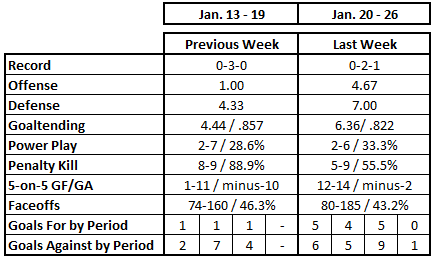 Two consecutive weeks without a win.  It is the first time this has happened to the Caps since we started doing TWTWTW summaries in the 2013-2014 season.  That happened to be the last time that the Caps ran off a seven game losing streak, going 0-5-2 in Games 45-51.  The difference between then and now is that the seven-game losing streak in 2013-2014 featured four losses by one goal, two of them in a Gimmick.  Only two of the losses came by three or more goals.  This seven-game streak, however, includes only two games lost by one-goal margins, both in overtime.  Four of the losses were by three or more goals, and in the last three of those losses – the Week 17 schedule – the Caps were outscored by a 21-14 margin.

The last time that the Caps had a longer losing streak was an eight-game slide in 2010-2011, made famous for being featured on the HBO series “Road to the NHL Winter Classic” in the run-up to the Caps’ meeting with the Pittsburgh Penguins on New Year’s Night 2011. 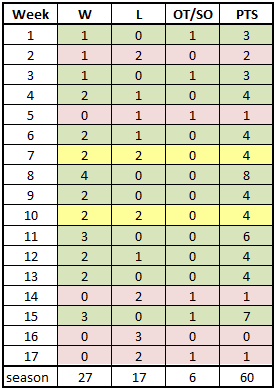 Week 17 was the very vision of “wasted” offense.  The Caps scored 14 goals in three games, tying the Carolina Hurricanes for most over the week (both did it in three games).  They led the league in shots on goal by a wide margin, their 122 shots topping Carolina by a whopping 19 shots on goal.  The Caps tied Carolina for the league lead for the week in even strength goals (12).  Put another way, this is a club that has allowed four or more goals four times in their last ten games.  The 14-goal output was more than nine percent of the goal total that the Caps brought into the week (154) over 47 games.

Two other Caps had multi-goal weeks, both of them defensemen – Matt Niskanen and John  Carlson.  Both players broke out of lengthy dry spells in goal scoring.  Carlson’s two goals in the 8-5 loss to the Chicago Blackhawks to start the week snapped an 11-game goalless streak and a run of one goal over a 38-game stretch.  Niskanen’s goal against Chicago ended his own streak without a goal at ten games and a run of 30 games with only two goals scored.  He added a goal in the 6-3 loss to the Toronto Maple Leafs to end the week.

Even Brooks Orpik got into the goal scoring column, potting one in the loss to the Blackhawks.  It broke an 18-game streak without a goal, but the odd thing about the two goals he has this season is that both came in losses, he had his other goal in a 7-6 overtime loss to Pittsburgh on October 4th.  The goal in Week 17 gave Orpik two or more goals for a season for the seventh time in his career.  He had three goals for the Caps in 2015-2016, his career high.

Sixteen skaters posted points for the week, led by T.J. Oshie (1-6-7).  Oshie had points in all three games for the week, his first three-game points streak since he opened the season with points in the Caps’s first three games of the season )(4-2-6).  The three multi-point game he had in Week 17 was his longest multi-point streak as a Capital and his longest since he went 4-5-9 over a three-game stretch for the St. Louis Blues in January 2015.

Last week, we opened this section as follows: “Thirteen goals in three games is a lot of goals.”  If only the Caps allowed “only” 13 goals in Week 17.  They might have had two wins.  As it was, the Caps allowed 21 goals, and even if two of them were of the empty-net variety, that is a lot of goals.  How bad was it?  San Jose, a team than allowed six goals to the Caps (and won in overtime), had the second-highest total of goals allowed for the week: 12.  The 21 goals the Caps allowed for the week was 15 percent of the 140 goals they allowed in their previous 47 games this season.

It started bad and just got worse for goaltending in Week 17.  What made it odd was that Braden Holtby came into the week with a solid .921 save percentage over 12 appearances, despite suffering a facial injury when he took a stick through his mask against Columbus on January 12th.  But in Week 17, it fell apart.  He allowed four goals on 11 shots to Chicago in 22 minutes and change before giving way to Pheonix Copley, who finished up the contest allowing three goals in 17 shots in the 8-5 loss (the Blackhawks added an empty netter).

Holtby returned against San Jose, and the best that could be said about his performance against the Sharks was that it was consistent – two goals allowed in each of the three regulation periods.  The last of those goals was scored with just one second left in the game, tying the contest and sending it to overtime, where he allowed a goal on the second shot he faced in the 7-6 loss.

There would be no redemption against Toronto to end the week.  Holtby allowed a game-tying goal to the Maple Leafs in the last minute of the first period, less than a minute after the Caps opened the scoring.  He allowed two goals in 3:08 to turn a one-goal lead into a one-goal deficit from which the Caps could not recover.  He finished the game allowing five goals on 36 shots (Toronto scored into an empty net in the last minute) and ended the week allowing 16 goals on 90 shots, a save percentage of .822.

Week 17 looked a lot like Week 16 – efficient, but with a low volume of chances.  Last week it was two goals on seven chances, and this week is was two goals on six chances.  It makes two weeks in succession with more than one power play goal scored, the first time the Caps went two consecutive weeks with at least two power play goals scored since they recorded a pair in each of Weeks 8 and 9.  It was still disappointing in some respects, though.   For instance, the Caps faced the worst penalty killing team in the league to start the week (Chicago) and failed to convert in two chances.  Chicago had the only power play goal of the game in their 8-5 win.

The Caps were 1-for-3 against San Jose, but holding a 5-4 lead to start the third period, they might have put the game away when they were awarded a power play just 53 seconds into the frame.  They did not, and although the Caps did take a 6-4 lead in the sixth minute of the period at even strength, they allowed two goals late to send the game to overtime, where they lost, 7-6.

Then, the last game of the week, the Caps scored on their first power play of the game against Toronto.  However, it would be the only power play chance the Caps would have in the 6-3 loss.

Another way in which this week resembled last week was in the goal scorers.  Just as in Week 16, it was Alex Ovechkin and Nicklas Backstrom lighting the lamp.  Backstrom and T.J. Oshie led the team in power play shots with three apiece.  As a team, the Caps did manage to get pucks to the net with some consistency, recording 11 power play shots on goal in 8:57 in power play ice time. 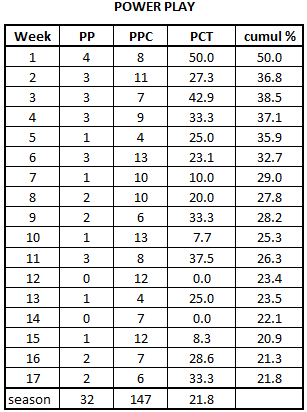 The penalty kill did not have many victims in Week 17.  The 55.6 percent kill rate was the second worst of the season, only the performance in Week 11 (5-10/50.0 percent) being worse.  A difficult week might have been predicted given that the three opponents all ranked among the top-16 teams in the league on the power play at week’s end.  But there is not enough lipstick to put on this pig.  It was especially brutal against San Jose, who enjoyed six of the nine power play chances allowed for the week and managed two goals on 12 shots in only 8:40 of power play ice time.  For the week, the Caps allowed four goals on 16 shots in 11:37 of penalty killing ice time. 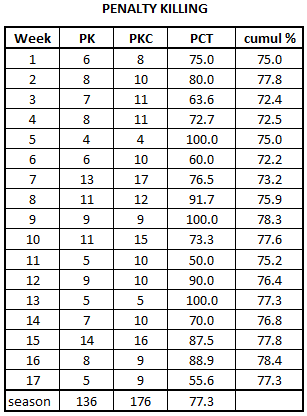 It was another poor week in the circle for the Caps.  The only unique thing about it was that only seven players took draws in three games.  As a result, some players got more chances than they otherwise would, but increased frequency was not accompanied by increased efficiency.  Five Caps took at least ten draws, but only Lars Eller among them finished over 50 percent for the week (56.1). 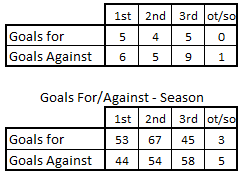 We find ourselves writing similar things from week-to-week these days, and one of them is that the Caps do not finish games well.  Not that they were any great shakes in the first or second periods of games; the Caps were in negative goal differential territory in all three regulation periods for the week (and in overtime, for that matter). 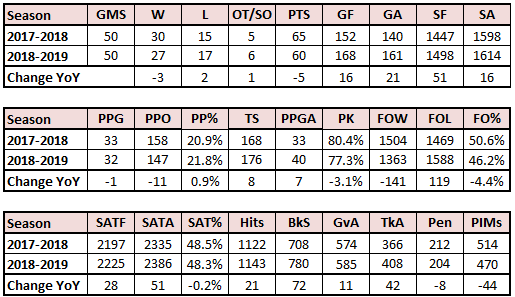 With the recent losing streak, the Caps have now fallen behind last year’s pace in many areas.  Most important, the Caps are behind last year’s pace in wins (27 to 30) and points (60 to 65) at the 50-game mark.  The obvious problem is scoring defense, where the Caps have allowed 21 more goals in 50 games than they did last season, a 15 percent increase.  That’s what allowing 21 goals in a week will do.

That the power play is up is good, but the chances are down about seven percent from the same place last season.  It is a bit worse on the other side of special teams, where the Caps have had to kill more shorthanded situations but have done so less efficiently, the penalty kill finishing under 80 percent through 50 games.

The Caps are at the 50-game mark at something of a crossroads in their season.  The 50-game mark coincides with the All-Star Game break and a bye week, which could give the team a chance to recharge, recover, and reset.  Down the other road is an inability to find the spark they had over the second half of last season and the first half of this one a span of 82 regular season games in which they went 49-25-8, sandwiched around a Stanley Cup win.  This is a team with too much talent and experience to think that, as a group, they suddenly lost the ability to win hockey games on a consistent basis.  But after consecutive weeks without a win, they are back to “prove it” time, making it important to get out of the "run and gun" rut they have been in, get back to disciplined hockey, and get out of the blocks quickly after their week off.