Washington Capitals: That Was The Week That Was -- Week 20

For the Washington Capitals, Week 20 was as close to a “crisis” week as they have faced this season.  Opening the week with the second of a back-to-back set of games, ending it with another set of back-to-backs, and in between seeing a few big pieces in the lineup forced out of the lineup with injuries.  And still, they split the week.  Step back and take the long view.  It could have been worse. 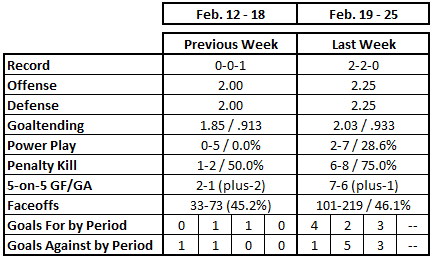 For the second straight week, the Caps played .500 in standings points earned, the first time they had consecutive non-winning weeks since Weeks 7-8, when they went 2-3-1 overall.  It was an odd week in that the Caps split two one-goal decisions and split two three-goal decisions.  Both of the losses for the week came in what were the second of back-to-back sets of games, opening the week with a loss to the New York Rangers after losing in a Gimmick to the Detroit Red Wings the previous day, then closing the week with a loss to the Nashville Predators an evening after beating the Edmonton Oilers.  In both instances, the Caps started a game less than 24 hours after the start of the previous day’s game.

Since the bye week, the Caps have played five games in eight days, going 2-2-1 in those games.  And, with their second consecutive weekend of back-to-back games, they have played three back-to-backs on weekends in February.  It makes that 8-2-1 record for the month look quite nice in the broader context. 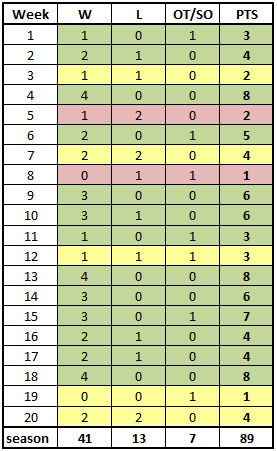 The Caps faced three of the top 14 scoring defenses in the league in Week 20, and it showed.  It might hav showed more than it should have, since the Caps managed a total of five goals against the New York Rangers, Edmonton Oilers, and Nashville Predators.  Part of the problem was the Caps missing Andre Burakovsky, T.J. Oshie, and Matt Niskanen, who have combined for 39 goals this season, for the last two games of the week (Burakovsky has been out since February 9th).

When the Caps scored two goals in their 2-1 win over Edmonton, their only home game of the week, it brought to an end an 11-game streak with five or more goals on home ice that tied a league record set by the 1970-1971 Boston Bruins.  As it was, Evgeny Kuznetsov led the Caps with three goals for the week.  Tom Wilson added a pair, giving him goals in consecutive games for the first time since Games 42 and 43 last season when he had goals against the Ottawa Senators and the Vancouver Canucks in consecutive wins.  Kuznetsov (3-1-4) and Justin Williams (1-3-4) led the team in points for the week.

For ten periods, it looked like great week for the Caps on the defensive side of the puck.  To that point they allowed just four goals, but it was a little deceptive, too.  In the first three games of the week the Caps allowed a total of 95 shots on goal – 30 or more in each of them.  It was the first time the Caps allowed 30 or more shots on goal in three straight games since Game 23-25 in Early December, all three of which went to extra time.  It was the first time this season it happened to the Caps with all three games ending in regulation.  And, ominously, the Caps allowed 14 or more shots in three of the nine periods, one in each game.  All of them occurred in the first periods of the games against the Rangers, Flyers, and Oilers.

When the Caps allowed “only” nine shots on goal in the opening period against the Nashville Predators, it might have looked as if the Caps were going to weather the storm of shots faced.  But when Nashville scored on their first shot on goal of the second period, the dam burst.  Missing defensemen Brooks Orpik and Matt Niskanen for a second straight game, Washington allowed only nine shots on goal in that second period, but the Predators scored on three of them on their way to a 5-2 win.  Oddly enough, the Caps held the Predators under ten shots in all three periods of that game and just 26 in all.

For the week, the Caps found themselves underwater in Corsi-for at 5-on-5, finishing at 47.88 percent (numbers from Corsica.hockey).  Their only 50-plus game of the week came against the Rangers (52.08 percent).  And as for those first period shots, the Caps allowed almost of the week’s total (58 of 120) in the first frame of the four games.

Week 20 was an up-and-down week for goaltending – Braden Holtby up and Philipp Grubauer down.  In fairness to Grubauer, he had one bad period in six, that being the second period against Nashville when he allowed three goals on nine shots.  In his other five periods of play he stopped 43 of 46 shots.  He probably deserved a better fate than taking both losses for the week.  He has become a bit of a bad luck goalie of late, the two losses this week making him 2-4-0 in his last six appearances, despite having a 2.36 goals against average and a .926 save percentage.

The good part of the week on the power play was converting almost 30 percent of their chances.  The bad part for the Caps was getting only seven power play opportunities in four games.  That is their low in seven four-game weeks this season.  It was not an especially efficient week, the Caps registering just eight shots in 12:52 of power play time.  Alex Ovechkin had three of those and converted on one of them. Evgeny Kuznetsov recorded the other power play goal on the only power play shot on goal he had for the week.  What the Caps did not get was a shot on goal on the power play from a defenseman. 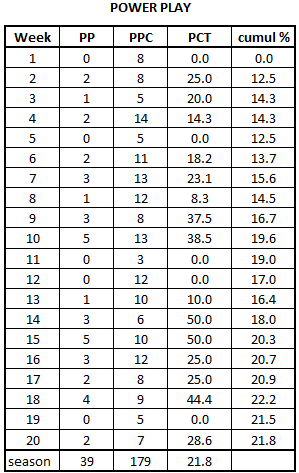 As far as the penalty killing was concerned, the low frequency was a good thing.  The eight shorthanded situations was the first time this season in seven four-game weeks that the Caps faced fewer than ten shorthanded situations.  And it appeared quantity matter.  Half of the power plays the Caps allowed came in the week’s final game, that against Nashville, who also happened to score both power play goals for the week.  It was the first time this season that the Caps allowed more than one power play goal in a road game.  Washington was good, if not great, at holding opponents back from the net.  They allowed 10 shots on goal in 12:43 of shorthanded ice time. 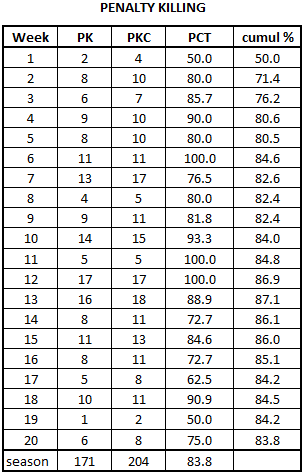 It was not a very good week in the circle, but it was not quite as bad as it looks.  Almost all of the deficit was a product of a week in which the Caps were just 32-for-80 in the neutral zone (40.0 percent).  Their combined effort in the offensive (46.2 percent) and defensive (52.8 percent) zones was one draw under 50 percent (49.6 percent).  At the individual level, it was Jay Beagle leading the way among Caps with at least ten draws taken.  Beagle finished the week 29-for-50 (58.0 percent).  None of the other three Caps taking at least ten draws reached the 50 percent mark.  Nicklas Backstrom finished at 46.0 percent for the week, Lars Eller finished at 35.6 percent, and Evgeny Kuznetsov finished at 45.8 percent. 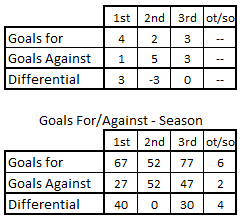 Week 20 looked a lot like the season for the Caps to date when it came to goals by period.  They had good first periods, they had iffy second periods (and one bad one), and they held their own in the third.  They increased their first period goal differential for the season to a league-best plus-40, but their minus-3 differential in the middle period for the week dropped their goal differential in the second period to even for the season.  The third periods were interesting in that the Caps allowed a game-winning goal in a tie game (against the Rangers) and scored a game winning goal of their own in a tie game (against Edmonton).

Even with injuries and an uncompromising schedule, the Caps broke even for Week 20.  There are just some weeks that have to be endured, and this was one of them.  As it is, the Caps still have the fewest man-games lost this season, but the impact of having Andre Burakovsky, T.J. Oshie, Matt Niskanen, and Brooks Orpik out of the lineup simultaneously for half the of the week had its effects.  The longer any combination of these players is out, the more those effects might be felt.  But that is why we said in the prognosto for the Nashville game, “That makes this week…as much an opportunity as a challenge, an opportunity to put some steel in the spine of the club that they will need when the playoffs come around in a couple of months.”   The Caps have six weeks and a day to forge that steel and get guys healthy.