Hail! to the Victors Valiant...

...Hail! to the conquering heroes
Hail, hail, to Michigan... 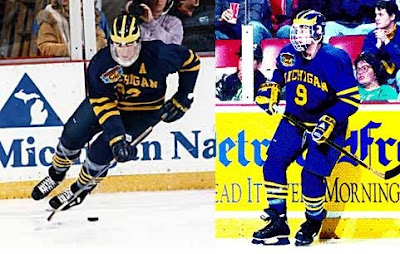 ...but as a former Spartan, they might call it maize, but we still call it "corn."
Posted by The Peerless at 8:49 PM 3 comments:

Since we're sitting here in the throes of summer, waiting for development camp and pondering the latest signing (elsewhere) of free agents, we thought we'd provide some fresh leftover reading material -- a look back at the 2008-2009 season and ten games that mattered in the course of things. Some are wins, some are losses (some of them grisly), but all have something to take away from them. We won't cover them all at once, but we will cover them chronologically. Here is a three-fer to get you started...

The background: Opening Night. Atlanta was coming off a disappointing year, finishing 14th in the 15-team Eastern Conference, unveiling a new slogan, “Become One in Blueland.” The Caps were coming off a disappointing finish to a spellbinding season that saw them rise from worst to first in the Southeast Division and a three-seed in the playoffs, where they lost to Philadelphia in the opening round. But it was a different Caps team in one important respect. The goalie who led them on a sprint to the finish, going 11-2-0, 1.63, .936, with two shutouts in the process, signed a contract with Chicago. The Caps were left to pursue a “Plan b,” signing Jose Theodore to a two-year deal. Theodore would open for the Caps on Opening Night.

Why it mattered: Theodore was shelled, giving up four goals on 17 shots in 29:30 of play before being relieved by Brent Johnson (who took the loss after the Caps tied the game late in the second period). Everything that the Caps could be – good and bad – was on display. The Caps spotted the Thrashers a 3-0 lead, but tied the game at four in the second, but… they gave up three goals in 2:10 in the third period to provide the final margin. The Caps were a grisly six-for-nine on the penalty kill, the nine shorthanded situations faced being as bad as the poor percentage of success, but… David Steckel potted a short-handed goal to get the Caps back within one after falling behind 3-0. Mike Green had a three-point night (2-1-3), but… he was on the ice for the first two Thrasher goals.

The takeaway: For a team now employing a goaltender for whom the consensus seemed to be that he lacked consistency, this was just about the worst start imaginable.

The background: A Capitals-Penguins game is always special for the teams and their fans, but the addition of an Alex Ovechkin-Sidney Crosby rivalry has only added to it, giving it national (in two countries) significance. And on top of that, these were two teams that many speculated would meet in the spring. The Caps had not won on Mellon Arena ice in regulation since a 4-1 win on December 3, 2002. The only player on the roster from that team was Michael Nylander, and he had two stop-overs (Boston and the Rangers) before returning to the Caps.

Why it mattered: This was a two-fer. First, there was the matter of being able to win on the road, in Mellon Arena. Then there was the matter of the Caps being able to crawl out of a 3-0 hole (all the goals scored on the power play) they dug for themselves only 21:51 into the game. And it wasn’t Alex Ovechkin leading the way – he would finish this game scoreless. The Caps got goals from Tomas Fleischmann, Alexander Semin, Michael Nylander, and Boyd Gordon, and they got two-point games from Fleischmann, Semin, Nylander, and Eric Fehr to fuel the comeback. Boyd Gordon had the game-winner on a delayed-decision goal after he ripped one (well, as much as “Muffin” can rip one) that hit the back pipe of the goal and had it bounce back out fast enough to make it unclear whether the puck crossed the goal line in the first place. After more than two minutes of play continued, a replay showed that it did in fact count.

The takeaway: A game that the Caps fall behind early, on the road, against a formidable opponent, in which Alex Ovechkin didn’t have a point… and they win. There might be some resiliency in this team after all. And Sidney Crosby was a minus-3 for his trouble.

The background: The Caps started a western part of a five-game road trip with a 10-4-3 record, but the west has not been generally hospitable to the Caps in the past. They split two games (winning in Anaheim before losing in Los Angeles) before heading to San Jose. The Sharks came into this game 16-3-1 and were 10-0-1 at home, where they had scored 41 goals in those 11 home games. This would be a game by which the Caps could measure themselves – a hot team widely expected to be on the short list of Stanley Cup contenders.

Why it mattered: If this was a test, the Caps flunked. But better such a test be administered now then late in the season. While the Caps had a good record coming in, they showed themselves capable of putting up the real stinker (the opening night loss to Atlanta, a 5-0 loss in Buffalo, a 5-2 loss to Los Angeles). But the Caps seemed to save these for lesser opponents; they showed an ability to compete well against better teams (the 4-3 win over Pittsburgh, a convincing 4-2 win over an up-and-coming Chicago team in the home opener, beating nemesis Roberto Luongo in a 5-2 win over Vancouver). But this was the biggest test of the season to date, and the Caps came out flat and had the look of a disinterested team.

The takeaway: If it was a lesson, it was a lesson apparently taken to heart. The Caps would lose their next game – at Minnesota – but would then snap off a 16-4-0 record in their next 20 games, giving up only 48 goals in the process, holding 12 opponents to two goals or fewer. And no one might have had to learn a tougher lesson on this night than defenseman Jeff Schultz. He was on the ice for the first three goals the Sharks scored (all in the first period) and five of the total of seven, finishing a minus-4 for the evening. But over his next 20 games, he was 1-2-3, +18.
Posted by The Peerless at 12:50 PM No comments: