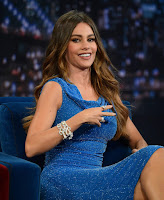 The Washington Capitals completed the pre-All-Star Game portion of their season on Thursday night, defeating the New Jersey Devils, 5-2, in Newark.  The Caps wrapped up this portion of the season on a 20-3-4 run that puts them at the top of the league’s standings at the break.

Alex Ovechkin opened the scoring for the Caps.  It started with Devils’ defenseman Kyle Quincey trying to move the puck forward from his own blue line, but all he managed to do was bat the puck off Ovechkin where it popped into the air.  Ovechkin waited as Quincey glided past, then collected the puck and broke in alone on goalie Keith Kinkaid.  Ovechkin got Kinkaid to bite on a forehand look, pulled the puck to his backhand, and roofed it under the crossbar to make it 1-0, 6:14 into the game.

Andre Burakovsky got on the board late in the first period on a power play, converting some good forechecking by Evgeny Kuznetsov.  Hounding Jon Merrill in the corner, Kuznetsov got Merrill to send the puck to the middle where Adam Henrique was waiting.  The puck was too hot for Henrique to handle, and it ended up on Burakovsky’s stick in the low slot.  Burakovsky curled the puck around a sprawled Kinkaid and fired it into the open net at the 18:28 mark to make it 2-0.

New Jersey got their first of the game early in the second period when Stefan Noesen converted a centering feed from Pavel Zacha, depositing the puck past Braden Holtby from the low slot at the 3:19 mark.  It was Noesen’s first goal with the Devils in his first game with the club after being claimed on waivers from the Anaheim Ducks.

Washington recovered its two-goal lead five minutes later.  A drive from Dmitry Orlov was muffled in front of Kinkaid, but Lars Eller was johnny-on-the-spot to turn, collect the puck, and wrap it around Kinkaid to make it 3-1, 8:29 into the period.

Less than two minutes later, the Caps lit the lamp again on another power play.  Alex Ovechkin dropped the puck in his own end for Dmitry Orlov circling deep.  Orlov curled around the net and headed up the middle of the ice.  From just inside his own blue line, Orlov fed the puck ahead to Kuznetsov angling to the Devils’ blue line.  Kuznetsov took control of the puck, walked it around defenseman Steven Santini, and slid it between the pads of Kinkaid, ending the Devils goaliie’s night at the 10:19 mark.

New Jersey got back within a pair late in the second period when Adam Henrique deftly redirected a Mike Cammalleri drive behind Holtby to make it 4-2 with just 1:44 left in the period.

The third period was quiet until Kuznetsov potted an empty netter with 1:53 left for the final 5-2 margin.

-- For the Caps, it was the 12th time in 15 games that they recorded four or more goals.  See if you can spot the odd fact of the three times they didn’t… 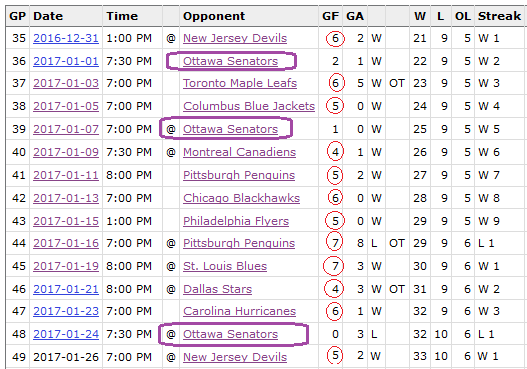 (salute to Ben Raby, who tweeted this fact during the game).

-- Alex Ovechkin’s goal was his 548th career goal, tying him with Michel Goulet for 28th place on the all-time list.  Next up…Ron Francis with 549.

-- Ovechkin’s assist made it helpers in eight of his last 12 games and his 22nd of the season, surpassing his total of 21 last season.

-- Two power plays made it eight games in the last ten in which the Caps have at least one power play goal (three times with multiple power play games), over that span going 11-for-28 (39.3 percent).

-- Andre Burakovsky was 1-1-2, his goal making him the seventh player on the club in double digits in goals.  It was his seventh multi-point game this season, tying his career high, set last season.

-- Evgeny Kuznetsov recorded his third and fourth goals (the latter an empty netter) in his last five games, alternative goal-games (against St. Louis and Carolina) with no-goal games (against Dallas and Ottawa).

This game was so “business-like,” the post-game report should be a balance sheet.  The Caps scored early, applied consistent pressure, didn’t let the Devils get much in the way of momentum, then closed the deal smartly.  And this was no ordinary game.  It was the fourth game in six nights, on the road, and the Caps played without John Carlson and T.J. Oshie.  It is testimony as to just how deep this team is, and that might be the best thing going for this team as they get a well-deserved break.

Posted by The Peerless at 9:56 PM No comments: