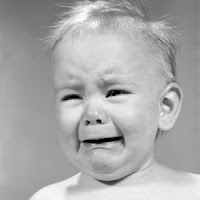 But it would have been nice to win Game “One.” The Washington Capitals could not take advantage of a sparkling NHL playoff debut from goaltender Braden Holtby and lost the first game of the Eastern Conference quarterfinal series to the Boston Bruins, 1-0, in overtime.

Chris Kelly scored the game’s only goal 1:18 into overtime on his only shot of the game, a slap shot from the top of the left wing circle that found the far side of the net over Holtby’s glove and just inside the post.

It was one of those games in which you could say that the result was fair, but not just. Holtby kept the Caps in the game when the Bruins looked as if they might run the Caps out of the building in the second period. The Caps were outshot, 17-2, in the second period, and Holtby stopped all 17 Bruin shots, including seven shots on two power plays, one of which was the product of his own roughing penalty on Chris Kelly.

-- The end was, in a way, typical. Last season the Bruins were 4-1 in overtime in their march to the Stanley Cup. On the other hand, the Caps were 18-23 in franchise playoff history in overtime. Make that 18-24.

-- Round 1 of this seven-round heavyweight bout goes to Zdeno Chara. Alex Ovechkin was held to two shot attempts (one on goal, on a power play). Ovechkin skated 20 shifts for the game, and Chara was on the ice for at least some time on every single one of them.

-- The shots tell the tale, part 2. Time Thomas is a fine goalie. He is even better when he doesn’t have to work very hard. Courtesy of the Washington Post, here is the shot graphic for the Caps for the game and each of their 17 shots (we added the “home plate” scoring chance area). Two shots from what might be reasonably called “scoring territory?” Not gonna get it done. 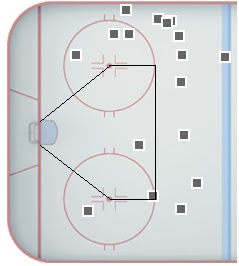 -- Shots tell the tale, part 3. All those shots from above the circles and almost nothing -- well, nothing -- from inside the dots and below the circle. Speaks volumes for the lack of traffic in front of Thomas.

-- Didn’t take long for Brad Marchand to test the limits of the Caps’ tolerance for crap. First shift, he takes down Mike Green after Holtby stopped the puck. Green got right back up in his face. The Caps will have to match this chippy nonsense every time it happens, or the Bruins will just push the envelope a little further.

-- If Brooks Laich goes 3-for-11 on faceoffs in the defensive zone against Patrice Bergeron too often, the Caps are going to be burned. Too many opportunities for the Bruins to start their offense with the Caps on their heels.

-- Only three Bruin skaters were not credited with a hit. Brad Marchand was one of them...odd.

-- If Chara and Ovechkin fight to a standstill, Backstrom and Semin are going to have to take better advantage of Andrew Ference and Johnny Boychuk. If Boston commits Chara and Dennis Seidenberg to stopping Ovechkin, it is the battle between these two pairs that could decide the series. Backstrom and Semin had nine shot attempts (four on goal) between them, but all of their shots on goal were from above the circles.

In the end, you still have to get to “four.” No one should know this better than Caps fans, who have seen the Caps get to three a lot, not so often to “four.” There are good things to take away from this game – Holtby’s play and the fact that not many of the Bruins’ 29 shots on goal came from inside the “home plate of success” either. It is said that a playoff series doesn’t really start until a team wins on the road. The Caps task now is to start the series on Saturday.
Posted by The Peerless at 6:40 AM 2 comments: