Put Cancer on Ice is a group of Washington Capitals fans that organizes monthly hockey games and other events (such as the Dave Fay Memorial Classic that was held in July) to contribute to the fight against cancer.
As Gavin Toner -- one of the founding members of the group -- points out, this month will see the second anniversary of the founding of the group and its monthly pick-up games for charity.
To date, PCOI has raised almost than $24,000 in this effort -- and counting -- with proceeds going to the American Cancer Society (through the Woodbridge Relay for Life) and Hockey Fights Cancer.
If your interested on what the group is up to, check out their web site, or check The Official for news on upcoming games.
To Gavin Toner, Rob Keaton and Ben Wilson, happy anniversary. Here's to hoping there will be a "Going Out of Business" game in the near future, because cancer will have been put "on ice," in no small part due to your efforts.
Posted by The Peerless at 7:00 AM No comments: 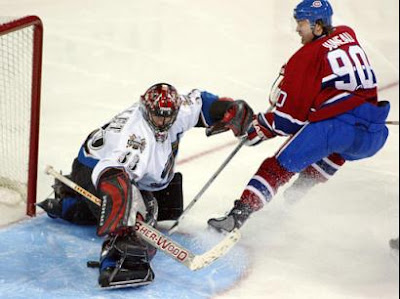 Appearing at a Wachovia Center near you soon?
Oh, and that "Briere Experiment" looks interesting, too.
Posted by The Peerless at 6:14 AM No comments:

Now, we take a look at the new guy…


Feerless’ Take: OK, let’s get to the happy ending right away. In every year Theodore has played more than half his team’s games in the NHL, he has had a GAA of 2.90 or lower, had a save percentage of .908 or better. Last year, while Cristobal Huet was doing his magic in Washington, Theodore was having a nice home stretch of his own. Starting February 22, with a 3-2 shootout win over Phoenix, Theodore finished the year 13-5-1, 2.29, .916, and two shutouts. Only twice did he give up more than three goals (he did allow three goals in a 7-5 loss to Edmonton on March 22, in which he was pulled early). What’s more, he was 7-1 in one-goal games down the stretch, five of them won in extra time. Whatever issues there have been with respect to his post-lockout play (and there have been), he had more than a solid year last year in Colorado, and he proved clutch down the stretch. There isn’t any clear reason to think that for the Caps, he won't stop pucks as the number one goaltender.

Peerless’ Take: You really don’t want your goaltender to be your biggest unknown going into the season, especially when you’re being thought of as a team that can take the next big step to playoff success. But, that is the hand the Caps are playing as the 2008-2009 season begins. Theodore’s career breaks down into two neat phases, and they are, in fact, separated by the lockout. In his four full seasons as a number one goaltender heading into the lockout, Theodore was 103-112-26, 2.44, .918, with 15 shutouts. The win-loss record wasn’t especially noteworthy, but he put up pretty good goals-against and save percentage numbers in spite of it. After the lockout, he’s been 59-54-10, 2.88, .898, with three shutouts.

Theodore did finish up the regular season on a high note last year, and that is a hopeful sign. Lost in the implosion in the second round of the playoffs last year is the fact that he had a good first round against Minnesota. He was 4-2, 1.88, .940 in that series.

Which Theodore will the Caps see this year? The Caps have enough offensive firepower to cover up some bumpy stretches in goal (they had enough to cover those bumps Kolzig had from time to time during the middle third of the season last year), but at some point in this league, successful teams have to rely on solid goaltending. That point usually comes in the playoffs. Is Theodore that goaltender? That’s the biggest unknown heading into this season. But for the regular season…