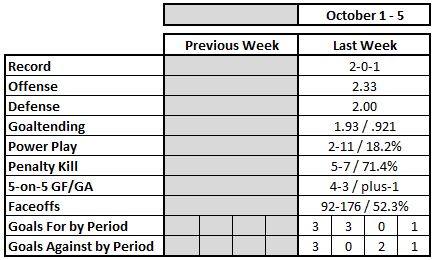 The Capitals entered the week down a top line forward (Evgeny Kuznetsov on suspension), down a top pair defensemen (Michal Kempny to injury), and breaking in a brand new goaltender who had not yet dressed for an NHL game (Ilya Samsonov).  Even with the missing players, though, the Caps matched their first three game record of last season (2-0-1) and did so with a pair of wins on the road.  In fact, that 2-0-1 record matches their three-game start for each of the previous three seasons.  The blemish on the week’s record, the 3-2 overtime loss to the Carolina Hurricanes, was the first loss for the Caps in a home opener since they dropped a 2-1 Gimmick decision to the Montreal Canadiens to open the home portion of the 2014-2015 season.

One might say that seven goals in three games is a meager level of output.  Consider that the Caps opened the season against the top-ranked (New York Islanders), fifth-ranked (St. Louis Blues), and eighth-ranked (Carolina Hurricanes) scoring defenses from last season.  The Islanders swapped out their goaltender from that club (Robin Lehner), but Semyon Varlamov is a fine goaltender in his own right.

As it was, the Caps filled the absence of center Evgeny Kuznetsov with effective winger production.  Six of the seven goals for the week were scored by wingers, T.J. Oshie and Jakub Vrana leading with two apiece (Alex Ovechkin and Garnet Hathaway had the others).  The Caps spread the point production around with four players recording three points (Oshie, Vrana, Lars Eller, and John Carlson).

As one might expect, Ovechkin led the club in shots on goal (14), and Jakub Vrana was quite assertive in that role as well (nine).  The surprise might have been Carl Hagelin tying with Oshie and Nicklas Backstrom with eight shots on goal.  Nic Dowd was the only Capital to finish the week without recording a shot on net.

While the Caps faced three of the best scoring defenses in the league from last season, the three opponents were not among the top scoring offenses.  St. Louis finished 15th in scoring offense last season, Carolina finished 16th, and the New York Islanders finished 22nd.  These are clubs the Caps should have had some success in defending, and by and large they did.  They held all three opponents under 30 shots on goal, a bit more noteworthy for having gone to overtime in two of the week’s games.  And, Carolina (28 shots against the Caps) led the league in shots on goal per game last season (34.4).

The Caps also dominated in an area in which they struggled last season.  Their shot attempts-for at 5-on-5 percentage was well over 50 percent in each of the three games – 57.38 percent to open the week in St. Louis, 59.21 percent against the Islanders, and 53.13 percent against Carolina.  Last season, Carolina (54.81 percent/2nd) and St. Louis (51.50 percent/10th) were top-ten teams in that statistical category.

If there was an odd part about the Caps’ defense for the week, it was that four of the six goals scored by opponents came from defensemen.  Jaccob Slavin and Jake Gardiner did it for Carolina, Devon Toews did it for the Islanders, and Alex Pietrangelo scored one for St. Louis.  The Caps did a better job of keeping big guns silent.  Vladimir Tarasenko and Jaden Schwartz were held without a point for St. Louis, Mathew Barzal and Anders Lee went without a point for the Islanders, and Sebastian Aho and Nino Niederreiter failed to record a point for Carolina.

Two goalies played, and the Caps got great play from one and solid play from the other.  The twist on this is that the great and solid came from different goalies than one might have expected.  Braden Holtby was solid in two starts for the Caps, stopping 20 of 22 shots in the 3-2 Opening Night win in St. Louis and turning aside 25 of 28 shots against Carolina in the 3-2 overtime loss on Saturday night.

For Holtby the start was encouraging.  Last season he opened with a 25-save shutout of Boston in the season opener, but then he allowed seven goals on 41 shots in a 7-6 overtime loss to Pittsburgh in his second outing.  The previous year, it was in his first game that Holtby was shaky, allowing four goals on 32 shots in an extra time win over the Ottawa Sentaors.  Holtby has not been a particularly effective October goaltender in the past.  Before this season he had a good win-loss record (25-16-3), but his goals against average (2.62) and save percentage (.911) were not particularly impressive.

Ilya Samsonov was a different story.  Before Friday night in New York, Samsonov had a grand total of 37 regular season and five postseason games played in North America as a professional, all with the Hershey Bears last season.  Against the Islanders in his NHL debut, he stopped eight of nine first period shots, and then he slammed the door, stopping all 17 shots he faced over the final two periods.  He was the first Capitals goalie to win in his NHL debut start on the road since Michal Neuvirth stopped 31 of 32 shots in a 5-1 win over the Tampa Bay Lightning on Valentine’s Day 2009, a game perhaps better known as the one in which defenseman Mike Green set an NHL record for consecutive games with a goal by a defenseman.

Not a good week for the Capitals’ man advantage.  Carolina and St. Louis both were top-ten penalty killing teams last season (eighth and ninth, respectively), but going 1-for nine against them (0-for-6 against Carolina) was a tough one – or two – take.  Part of the problem could be attributed to the absence of Evgeny Kuznetsov, who had 23 power play points for the team last season (fourth).

The Caps just did not get shots to the net, particularly against Carolina.  For the week, the Caps shot 2-for-14 with the man advantage (14.3 percent), but they did so over 20:14 of power play ice time, a poor shots-to-minutes result (0.69).  Against Carolina, the Caps had seven shots on six power plays in 11:26 of man advantage ice time.

The unflattering way to put the power play for the week was “messed up.”  IN the two games in which the Caps did record a power play goal, against St. Louis and the Islanders, Alex Ovechkin did not record a power play shot on goal.  In being shut out by the Hurricanes on the power play, he did have two shots, and they also got shots from John Carlson (two) and Nicklas Backstrom (one), players one would want getting those opportunities.  The killer, though, might have been in the overtime session against Carolina in which the Caps did get two power play shots (Carlson and T.J. Oshie) but could not convert.  As often seems to happen, that just made a loss in the extra session seem inevitable.

The Caps were not an specially efficient penalty killing team last season (78.9 percent/24th) and they started the new season in the same rut.  Thank heavens for small population sizes (in this instance, seven shorthanded situations).  And it was not as if they faced stout power plays overall.  True, St. Louis did finish 10 in power play efficiency last season (21.1 percent), and they did get a goal.  But Carolina was a bottom half team (17.8 percent/20th), and the Islanders were a bottom three team (14.5 percent/29th).

The Caps did not have a bad week in terms of limiting shots, allowing 10 shots in 11:38 of shorthanded ice time.  The silver lining for the penalty kill was in the opportunities.  Last season, the Caps allowed the fifth-highest power play chances per game (3.18). To hold three opponents to 2.33 chances per game, even with the four allowed to Carolina, is something on which they might build.

Washington had a good week in the circle, going over 50 percent in two of the three games and doing the same for the week in the offensive and defensive ends.  But frankly, they should have, and in some respect it was an odd week.  Last season, the Hurricanes and Islanders were bottom third teams in faceoff efficiency (24th and 29th, respectively).  However, while the Caps were a quite respectable 36-for 65 against Carolina (55.4 percent), they were just 26-for-50 (52.0 percent) against the Islanders.  Against last year’s sixth-ranked team in faceoffs, the Blues, the Caps were 30-for-61 (49.2 percent), not a bad result against a strong opponent on their ice.

Strong starts, weak finishes, with one exception.  The Caps split six goals scored in regulation equally between the first and second periods.  The saved their week early with an overtime goal in the opener.  That was offset by three first period goals scored by opponents (two by St. Louis, one by the Islanders), but it was the third period/overtime that kept the Caps from a perfect week, Carolina scoring a pair of third period goals and the goal in overtime that left the Caps with their only blemish on the week. 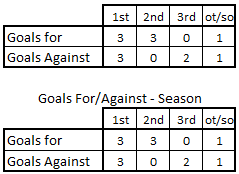 The record is the same over the first three games (2-0-1), but other than that the opening to this season looks almost nothing like the opening to last season.  The Caps opened last season lighting up the scoreboard like the National Christmas Tree, while this year they opened in their first three games scoring barely a third of the total (six) with which they opened last year (18). The power play stormed out to a 50 percent rating last year, far better than 18.2 percent the Caps started this season with.  Grittership numbers opened better last season – more hits, more blocked shots, more takeaways, fewer giveaways.  So far, shots allowed, faceoff efficiency, and penalties look better in this year’s start. 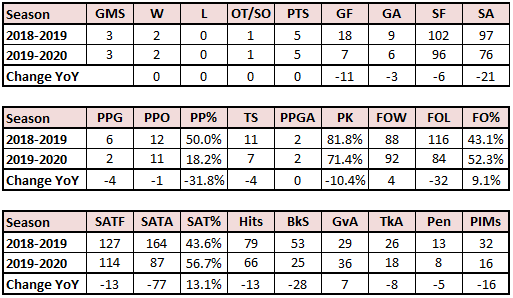 This was not the easiest of weeks with which to open the schedule.  The Stanley Cup champions on banner-raising night, facing their former coach in their season/home opener, and skating against the team that ended their season last year.  Coming out of it with five points isn’t a bad outcome, although failing to close things out against Carolina will leave a bad after taste for the week.

It will not get easier for the Caps in Week 2, with a different set of forces acting on them.  In this case, it will be playing two teams (the Dallas Stars home and away, wrapped around a game in Nashville against the Predators) that have given them fits over the years.  But the Caps will be welcoming back Evgeny Kuznetsov, and that could settle the team in the offensive end a bit.  They’ll need to be firing on all cylinders, though, if they are to end Week 2 as successfully as they did Week 1.

Three puppers
Posted by The Peerless at 2:00 PM No comments: