The Peerless Prognosticator is ON THE AIR!!! -- Game 46: Oilers at Capitals, January 20th

The Washington Capitals take the ice for the last time before the 2015 All-Star Game break on Tuesday night when they host the Edmonton Oilers at Verizon Center.  The Caps will be looking to reverse a two-game losing streak, their first such streak in more than seven weeks.

The Edmonton Oilers, on the other hand, will be looking to win consecutive games for the first time in more than two months.  Since the Oilers beat Buffalo and the New York Rangers in consecutive outings on November 7th and 9th, Edmonton is 5-18-8.  They have been playing better of late, though, although in the case of the Oilers, that is a relative term.  Edmonton is 3-4-1 in the new calendar year and snapped a three-game losing streak last Saturday with a 3-2 Gimmick win at Florida.  The Oilers also have wins, both by 5-2 scores, over the New York Islanders and the Chicago Blackhawks in the new year.

While Edmonton has crafted a semi-respectable record in the 2015 portion of their season so far, they have done so without the benefit of balanced scoring.  Eight players share the 21 goals scored by the Oilers over their eight games since New Year’s Day, but 12 of them were recorded by two players – Benoit Pouliot (7) and Jordan Eberle (5).

Pouliot’s is an interesting case.  Pouliot broke his foot while blocking a shot in the Oiler’s 2-0 loss to the New Jersey Devils on November 21st.  He missed 18 games before returning to the lineup on January 2nd against Colorado.  He scored a goal against the Avs, was held off the score sheet in his next two games, then ran off a four-game goal streak in which he scored six times.  With ten goals in 28 games this season he is on a pace to set a career best in goals, surpassing the 16 goals in 74 games he scored with the Boston Bruins in 2011-2012.  In 19 career games against Washington, Pouliot is 3-2-5, plus-4.

Jordan Eberle was, as most Caps fans know, taken with the pick right after the Capitals selected Anton Gustafsson in the 2008 entry draft.  Eberle has played in 320 NHL games.  Gustafsson has played in 320 fewer NHL games.  Not that it has all been unicorns and accordions for Eberle since coming into the NHL.  He has yet to play in an NHL playoff game, and his production has been a bit uneven since he posted 34 goals in his sophomore season in 2011-2012.  His 12 goals in 45 games so far this season is a bit off his career average of 28 goals per 82 games, but he does have those five goals in his last eight games.  His production on the road has not been as impressive, though, with just three goals in 21 games on the road this season.  In five career games against Washington, Eberle has a goal and an assists and is a minus-4.

The defense has been largely silent on offense in the new year for the Oilers.  Jeff Petry has the only goal among the blueliners in eight games in 2015 so far.  What Edmonton does have from the blue line is three assists from Justin Schultz and Andrew Ference.  In a way, Ference and Schultz represent bookends for the Edmonton blue line.  Ference is the oldest defenseman to have dressed for the Oilers this season (he will be 36 in March), while Schultz is the second youngest of the regular defensemen these days (he will be 25 in July; Oscar Klefbom is 21).

The Oilers are Ference’s fourth team in a 14-season career that started with Pittsburgh, moved to Calgary, headed east to Boston, then settled in Edmonton, where he has played the last two seasons.  With three assists in his last seven games he doubled his assist total for the season (2-6-8).  Schultz is in his third season with the Oilers and has established himself as a dependable scorer from the blue line.  He recorded 27 points in 48 games in his rookie season in 2012-2013, added 33 points in 74 games last season.  With three goals and 15 assists so far this season he is on a pace to finish 5-27-32.

Here is how the teams have done so far this season, number-wise: 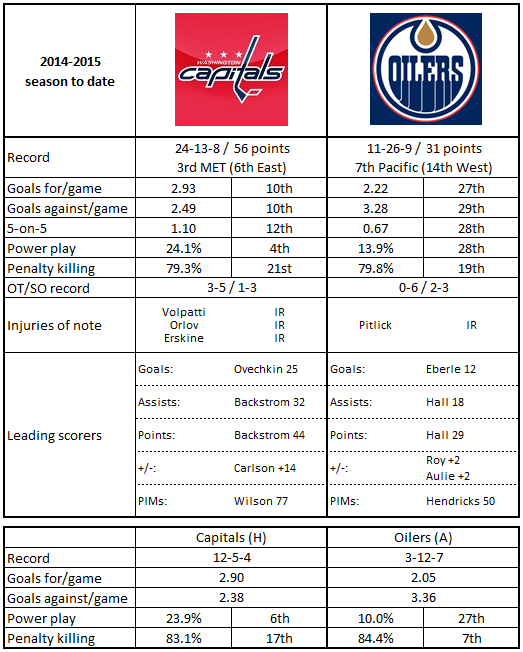 1.  Edmonton and the Dallas Stars are the only teams in the league this season without a win in overtime; both have lost six times in the five-minute session.

3.  Edmonton has taken a lead into the first period only 11 times in 46 games.  They happen to have the worst record in the league when doing so (4-4-3).  They are hardly any better when taking a lead into the second intermission.  Having done so only 13 times in 46 games, they have the worst record in the league in this area as well (7-2-4).  As for trailing at intermissions, they have no wins when trailing after 20 minutes (0-14-3) and have one win after trailing at the second intermission (1-21-2).  The only hope for this team seems to be ties at the break.

5.  Edmonton has a semi-respectable high-end possession ranking (21st in 5-on-5 Corsi-for percentage: 49.1 percent), but their PDO value is awful.  Their PDO of 97.2 through 46 games is second worst in the league.  This is what happens when a team has the third worst 5-on-5 shooting percentage (7.0) and the second worst save percentage (.902) at 5-on-5.  It is a team that cannot finish, but one that is finished upon regularly.

1.  Washington faced five shorthanded situations against Dallas in their 5-4 loss on Saturday.  It was the fifth time in their last 12 games that the Caps were shorthanded five or more times.  In those five games penalty killers were 24-for-30 (80.0 percent), but the team’s record was 2-2-1.

5.  The Caps have trailed at the second intermission only ten times all season.  No team has been in that situation fewer times than Washington.  It’s a good thing.  The Caps are one of five teams (Pittsburgh, Columbus, Winnipeg, and Arizona being the others) without a win when trailing after 40 minutes.

Turn back the clock to the summer of 2010.  The question on the minds of hockey pundits at the time was “Hall or Seguin? Seguin or Hall?”  Taylor Hall and Tyler Seguin were generally considered one-two among the amateur prospects in the 2010 draft, and the Oilers took Hall first overall in that draft.  Being picked second hardly was a curse on Tyler Seguin, who was part of a Stanley Cup winner as a rookie with the Boston Bruins in 2010-2011 and is currently among the league leaders in goals and points with the Dallas Stars after some hiccups along the way in his early career.  For Hall, success has been rare and fleeting on an individual level and nonexistent on a team level with the Oilers.

Hall has battled injury and inconsistency, and he has been surrounded by a largely underachieving team, even by the comparatively low standard of being able to compete for a playoff spot.  Now in his fifth season, Hall led the team or finished second in points in each of his first four seasons with the Oilers, and he leads the team so far this season (11-18-29).  However, he has not been the dominating player that one might have expected of a first-overall draft pick, and while he is still only 23 years old, one might wonder if this will be as good as it gets for Hall in Edmonton.  He was the first of three consecutive first-overall draft picks for the Oilers (Ryan Nugent-Hopkins and Nail Yakupov being the others) and one of seven top-ten overall picks Edmonton selected in the last eight drafts.  His is less an example of a player’s underachievement than it is having been sorely let down by management failing to build a credible team and coaching staff around him.  In three career games against Washington, Hall has one goal and is a minus-2.

Tom Wilson is eighth in the league in total penalty minutes (77), an impressive total given that he has appeared in only 34 of the Caps’ 45 games to date.  He is tied for fifth in fighting majors (seven).  Here is the thing, though.  Wilson has just two penalty minutes in his last eight games and has not had a fighting major in his last 13 games.  His recent discipline was on display in the Caps’ 1-0 win over the Philadelphia Flyers last Wednesday when it seemed the Flyers were frequently trying to get Wilson to bite on their attempts to lure him into a penalty.

Wilson is a player who had demonstrated that he is not to be trifled with, but he appears to be entering another phase of his early development – staying on the ice and contributing more within the rules.  His offense has been largely absent over the last month (0-1-1 in his last 15 games with only 13 shots on goal), but he also has only 116 games under his belt.  However, he has already matched last year’s point total (10 in 82 games) in the 34 games he has played thus far, almost a 25-point pace over 82 games.  For a second year player who shuttled between the first and fourth lines, that is not a bad scoring pace.  However, with less than 40 games left in the season it remains to be seen if he can improve on that production.  Wilson does not have a point in two career appearances against Edmonton.