“Life is one big road with lots of signs. So when you riding through the ruts, don't complicate your mind. Flee from hate, mischief and jealousy. Don't bury your thoughts, put your vision to reality. Wake Up and Live!”
-- Bob Marley

Andre Burakovsky was largely free of expectations in his rookie season, an unexpected acceleration of his development curve when he impressed the brain trust enough to keep him on the parent roster to start the 2014-2015 season.  It was trust well placed, as Burakovsky finished in the top-20 among rookies in assists (13) and points (22), and was in the top-25 among rookies in goals scored (9), despite appearing in only 53 games (tied for 33rd in the rookie class).  When he finished the 2015 postseason with a more modest two goals and an assist in 11 games, it might have been chalked up to his first turn on the bigger stage of the playoffs.

His 2015-2016 regular season did not fall victim to the “sophomore slump.”  In 79 games he finished with 17 goals and 38 points, one of 20 forwards 21 years of age or younger to finish the season with at least 35 points.  He nearly doubled his shot total from his rookie season (from 65 to 126) without suffering an accompanying significant loss in efficiency (13.5 percent versus 13.8 percent in his rookie year).  He tied Nicklas Backstrom for third on the club in even-strength goals (17) and tied T.J. Oshie for fifth in even-strength points (34).

It was not all skittles and ambrosia for Burakovsky, who endured a mental time-out – a two-game absence – in late November after a stretch of 11 games in which he registered just one assist.  At the time, head coach Barry Trotz said of him:

Even after that short hiatus, though, he struggled to put up numbers, putting up just a pair of assists over a 14-game stretch.  However, starting with a goal in a 5-2 win over the Buffalo Sabres on December 30th, Burakovsky went on to go 15-15-30, plus-7 in his last 47 games.

As it was, he had some odd splits over the course of the season.  There was the disparity in home scoring (9-14-23, plus-10) versus road scoring (8-7-15, minus-6).  And, he seemed to have an affinity for playing teams from Pennsylvania.  The only two teams against which he scored two goals this season were the Philadelphia Flyers (two goals in four games) and the Pittsburgh Penguins (two goals in five games).  The odd thing about that was that the Caps lost every game, an overtime loss to the Flyers in which he recorded his only two-goal game of the season and a pair of losses to the Penguins (one in overtime). 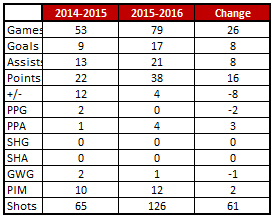 Fearless’ Take… Burakovsky spent a lot of time on the second line this season, suggesting a certain scorer’s responsibility, but sometimes it is easy to overlook just how young he is.  He is just the 11th player in Capitals history to have played at least 100 games and recorded at least 50 points in his first two seasons without having reached his 22nd birthday.  Only four Capitals have done it since the 2004-2005 lockout – Alex Ovechkin, Nicklas Backstrom, and Marcus Johansson are the others.

Cheerless’ Take… Cuz mentioned that slow start Burakovsky had to this season.  He didn’t mention the slow finish, and that was before the playoffs.  He had a goal and an assist (both against Pittsburgh in a 4-3 overtime loss on April 7th) in his last 11 games.  The eight-game streak he had without a point from March 22nd through April 5th tied his longest of the year (in November, part of that slow start).  Oh, and the Caps lost four of five games in which he recorded more than 17 minutes of ice time.

Odd Burakovsky Fact… He was the only Capital other than Alex Ovechkin to record 10 or more shots in a game this season.  He had one goal on ten shots in a 5-2 loss to the Florida Panthers on February 2nd.  He is one of four Capitals in the Ovechkin era to record ten or more shots on goal in a game and the first to do it, other than Ovechkin, since Alexander Semin had ten shots on goal in a 3-1 loss to the Boston Bruins on October 19, 2010.  For the record, Ovechkin has recorded ten or more shots in a game 45 times in his career, Alexander Semin did it three times over that same span of time, and Mike Green and Burakovsky did it once apiece.

Sure, there was the goal against the Bruins, the Caps’ first one of the contest at TD Garden in Boston, converting in one motion a nifty cross-ice feed from Evgeny Kuznetsov…

…but Burakovsky also managed to hound Zdeno Chara into taking a delay-of-game penalty for shooting the puck over the glass, the Caps scoring on the ensuing power play, and he finished the game with a season high three credited hits in just under 17 minutes of ice time in a 3-2 Caps win on January 5th.

Late in the first period of a 1-0 game, there was a faceoff in the Caps’ end to the left of goalie Braden Holtby.  Henrik Zetterberg won it from Michael Latta and headed for the net.  He then took a return pass from Dylan Larkin to tie the game.  What was noteworthy about the play was what Andre Burakovsky was doing…

…not much of anything as it turned out, Zetterberg cutting underneath him in open ice to take the pass and score.  Burakovsky got six more shifts after that and finished with his lowest ice time number of the season (6:45), although the Caps did get the win in a Gimmick, 3-2.

Years from now…well, maybe months…ok, for now…folks will look at Andre Burakovsky’s performance numbers in the postseason (one goal in 12 games, a minus-1 overall) and look at his personal underlying numbers (59.7 percent Corsi-for at 5-on-5, Corsi-for/Relative of plus-10.7) and scratch their heads in wonder, asking themselves, “how did THIS happen?”  In only two of the 12 games in which he played did opponents have more shot attempts than the Caps at 5-on-5 when he was on the ice (Games 2 and 3 against the Philadelphia Flyers).  Only once was he underwater in Corsi-for/Relative at fives (Game 4 against the Flyers; numbers from war-on-ice.com).  But there is was, one goal…one point…in the postseason.  Ain't no "Corsi" Smythe Trophy in the playoffs.

Andre Burakovsky had what was a pretty nice second season in the NHL blow up in the postseason.  But then again, he’s a young guy.  Don’t forget that.  The Caps have had 26 forwards in their history play in at least 50 games over their first two seasons and not yet reach their 22nd birthday.  Burakovsky ranks smack in the middle of that (13th) on a points per game basis (0.45), roughly the same as what Marcus Johansson did in the same situation in his first two seasons before reaching his 22nd birthday (0.49 points per game).

It is a bit early to draw any conclusions about Burakovsky’s destiny, even with the disappointing postseason.  He is, as he was at the start of the season, a promising player, perhaps one who is still slightly ahead of his expected development curve.  But this postseason did serve as something of a wake-up call, that regular season numbers are nice, and fancystats are all the rage.  But Cups are won with goals, assists, and wins, and Burakovsky will be evaluated in the postseason if not overall, as will the team, on the basis of how many of those they put together in the spring.