You might not know it, but Chandler Stephenson is a member of a small class of Capitals.  Last season, his rookie year with the club, he became only the 13th player in team history to record at least five goals and 15 points while posting a plus-minus rating of plus-ten or better in his rookie season.    He followed that up by appearing in the most games by a rookie in a single postseason in team history (24) and being only the sixth rookie in team history to record at least five points as a rookie in the postseason (he went 2-5-7; Jakub Vrana would join that list as the seventh member later in the postseason).

One might reasonably expect that Stephenson might build on that rookie season to make larger contributions as a bottom-six forward, especially with the departure of Jay Beagle in free agency.  It did not come to pass.  Stephenson recorded an assist in the Caps’ 7-0 Opening Night win over Boston, but he was languishing with a 1-3-4, minus-9, scoring line through his first 25 games.

Soon thereafter, his playing time started dropping, and his appearances became more infrequent.  Stephenson would dress for each of the Caps’ first 30 games, averaging 13:14 in ice time.  However, starting with Game 31 through Game 62 on February 23rd, he dressed for only 25 games, and his ice time dropped to 11:20 per game while going 3-1-4, minus-2.  That game on February 23rd was significant in that it also represented the debut of Carl Hagelin with the Caps, who the team obtained in trade two days before that game.  Stephenson was out of the lineup for the next eight games and dressed for only nine of the Caps’ last 20 regular season games, going 0-1-1, minus-3, and averaging 10:34 in ice time per game. 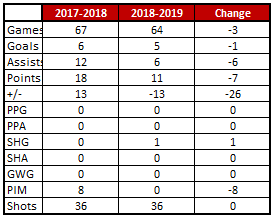 Fearless’ Take… Chandler Stephenson scored five goals this season.  In each of the five games he scored his goal on his only shot on goal.  Eight times in ten career games in which he scored goals, he did it on his only shots.  This includes his only career two-goal game, those goals recorded on two shots in a 5-3 win over Philadelphia on January 31, 2018.

Odd Stephenson Fact… Chandler Stephenson is the 14th player in NHL history (16th occurrence) and the first player in almost 40 years to appear in at least 60 games and log no penalty minutes.   The last player to do it was Butch Goring, who appeared in 78 games for the New York Islanders in 1980-1981 without spending a single minute in the penalty box.

Chandler Stephenson sat out two of three games before the Caps hosted the Buffalo Sabres in the week before Christmas.  He had gone without a point in five games since posting his only two-point game of the season (1-1-2) in a 6-5 loss to the Anaheim Ducks on December 2nd.  It was a sluggish start for both teams in this game, neither of which could find the back of the net in the first period.  Buffalo got a chance to break the ice in the second period when Jonas Siegenthaler was sent to the penalty box on a tripping penalty.

However, just seconds into the Sabres’ power play, Rasmus Ristolainen tried to keep the puck in the offensive end but failed to control it.  Nic Dowd picked it up and flipped the puck into open space in the neutral zone where Stephenson could track it down.  Collecting it behind the Buffalo defense, he skated in alone on goalie Carter Hutton, and pulling it to his forehand, he faked going blocker side and shot it back across his body over Hutton’s glove to give the Caps a 1-0 lead 2:50 into the second period. It gave the Caps a lead they would not turn over as they went on to beat the Sabres, 2-1, Stephenson finishing with the shorthanded goal, three shot attempts, a hit, two takeaways, and a plus-1 while earning the game’s third star.

The Caps opened the season with a dominating performance over the Boston Bruins, winning by a 7-0 margin.  But that was merely the first half of a back-to-back set of games to open the new season.  The back half of the set would be played in Pittsburgh against the Penguins, who the Caps defeated in overtime in their last visit, clinching the Eastern Conference semifinal series last spring.  As was the case in a number of recent meetings in Pittsburgh, the game devolved into a shootout.  The teams combined for five goals in the first period, the Caps taking a 3-2 lead to the intermission.  The Penguins came back to outscore the Caps, 3-1, in the second period to take a 5-4 lead to the second intermission.  Pittsburgh added to their lead early in the third period, but the Caps came back with two goals in 21 seconds by T.J. Oshie mid-way through the period to tie the game.  The Penguins would come out on top, though, getting an overtime goal from Kris Letang for the 7-6 win.

For Chandler Stephenson, it was a frustrating game.  In the midst of all the Caps’ offense, he did not record a single shot attempt, while at the other end he was on the ice for three Penguin goals.  He finished the game what was for him a season-worst minus-3.

Postseason…  It was here where the difference between seasons for Stephenson were perhaps most stark.  He dressed for six of the seven games against Carolina, but while he averaged more than 15 minutes per game in 24 games of the 2018 playoffs, he topped 12 minutes of playing time only once, that coming in the Caps’ double-overtime loss to Carolina that eliminated them.  He averaged only 10:00 per game and did not record a point.

Looking ahead… Chandler Stephenson just wrapped up the second season of a two-year/$1.3 million contract and heads into the off-season as an arbitration-eligible restricted free agent.  He could be qualified at $715,000, and given the lack of depth and contract status of prospect forwards,  he still might be a relatively inexpensive alternative to populate the bottom-six forward group.  But while two years is little to go on when trying to predict future performance, he seems stuck for the time being in a statistical sense.  Can he grow into a player who makes more frequent contributions, even for a fourth liner?  Does he resemble the player who had a solid 2018 postseason, given his role, or the one who was almost invisible in the 2019 playoffs?

If there is such a thing as the “sophomore slump,” one could argue that Chandler Stephenson was a victim of it.  It was not that his regular season was a significant regression from what was, technically, his rookie season.  But given how he finished the season in the playoffs, the window of opportunity for taking more responsibility, and the expected (or hoped for) positive slope of a young player’s development, it was not the result one might have hoped for.

Balancing that is that among 13 Caps forwards appearing in at least half the team’s games, he was on ice for fewer goals against (39) than all but four other forwards, and he did get regular turns in the penalty killing rotation, fourth among forwards in average shorthanded ice time (1:46 per game).  Still, it was more a season of a step sideways than one being a step forward.