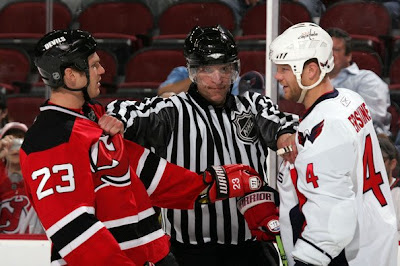 Theme: “Opportunity is missed by most because it is dressed in overalls and looks like work”

John Erskine was the only Capitals defenseman playing more than 15 games this year who did not score a goal.

That’s alright; that’s not his job. He was, by far, the team leader among defensemen in hits-per-game (2.46, compare to 1.99 for Milan Jurcina). He was third on the team – first among defensemen – in fighting majors (three). That’s more his job – the heavy lifting in the more physical aspects of the game. It’s a hard way to make a living, but that’s where Erskine makes his. And it’s taken Erskine a while to get to this point. Until this year, Erskine hung around the margins of NHL rosters – he had never played more than 51 games in a season for one team in his career (he played in 60 games for Dallas and the Islanders in 2005-2006). But Erskine earned a two-year contract extension with the Caps last fall, and he fills a niche on this team – the hard working defensive defenseman who plays with an edge. That’s suggested in the ten-game segments, where the offensive numbers are meager…

But 128 hits in 52 games, 63 penalty minutes, and three fighting majors is indicative of Erskine’s taking on his role with a certain gusto. And that is made more impressive by the fact that he missed 22 games with a mild concussion – not the sort of thing that would lead one to want to engage in a lot of physical stuff upon one’s return. But he did have 85 hits in the 33 games following that concussion and two of his fighting majors.

Erskine has a profile that suggests to some that of a 5/6/7 defenseman. Well, there might be some truth in that, but in 52 games, Erskine was on the minus side of the ledger only 12 times. If you’re not going to contribute a lot on the offensive end, one might put more emphasis on this sort of measure. While it’s true that he did not face the highest of competition (he was last in this measure among Caps defensemen playing at least 30 games, according to behindthenet.ca), he held up his end of the bargain and wasn’t on the ice for goals scored by opponents who shouldn’t do damage. In fact, Erskine was best on the team in goals scored-against per 60 minutes at 5-on-5 of any Capitals defenseman (30 games, minimum).

Part of Erskine’s success has to do with management of ice time. That’s important in putting him in a position where he can best succeed. He doesn’t have much in the way of offense to contribute – he averaged only two seconds (that’s not a misprint) of power play time a night – last on the team among defensemen. On the other hand, there are folks who are suspicious of his skating ability, which might account for his averaging only 1:37 in shorthanded ice time per game, sixth among Caps defensemen (30 games, minimum).

The question, though, is whether or not Erskine is a difference-maker. Hockey is not a sport that lends itself to clear conclusions that one player makes a difference, unless we are speaking of the elite of the elite, and 5/6/7 defensemen wouldn’t generally be among that class of player if it was possible to make those kinds of assessments. But the Caps were 20-10 with Erskine out of the lineup (including losses in extra time), 30-22 when he dressed.

Erskine is a player who defines the term “role player.” In this instance he fills the role of “physical defenseman” – the sort of player the Caps do not have in abundance anywhere in their system. But the comparative rarity of this specie of defenseman should not lead one to confuse Erskine with a Brooks Orpik or a Mike Komisarek among “physical” defensemen. He is not in that class. But he doesn’t cost $3,750,000 a year (Orpik), either, nor does he cost as much as what Komisarek is likely to be offered this summer as a free agent.

Last fall, we said this in previewing Erskine…

“…he has played – and can play – a part that contributes to success on this team…a guy who will give a good effort for 14-16 minutes a night, kill some penalties, wreak some havoc among opponents, stand up for his teammates, and give the top four guys a breather without putting the club at a disadvantage. It’s a role that is underrated.”

It is a role that Erskine filled and filled fairly well (he actually averaged 16:47 a night in ice time), testimony to Thomas Edison's quote about opportunity and hard work. The question going forward will be, can he improve upon it, or will the Caps have to upgrade at this position.

Email ThisBlogThis!Share to TwitterShare to FacebookShare to Pinterest
Labels: John Erskine, the tens 2008-2009 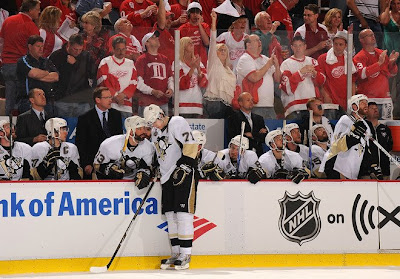